As it gears up for its finale, ENA’s “Extraordinary Attorney Woo” has continued its reign over this week’s rankings of the most buzzworthy dramas and actors!

For the seventh consecutive week, “Extraordinary Attorney Woo” ranked No. 1 on Good Data Corporation’s weekly list of the dramas that generated the most buzz. The company determines each week’s rankings by collecting data from news articles, blog posts, online communities, videos, and social media about dramas that are either currently airing or set to air soon.

Not only did “Extraordinary Attorney Woo” continue to top the list of most buzzworthy dramas, but star Kang Tae Oh also defended his position at No. 1 on the list of most buzzworthy drama cast members for the fifth week in a row. The drama’s cast absolutely dominated this week’s list, sweeping six out of the top 10 spots: aside from Kang Tae Oh, Park Eun Bin came in at No. 2, Kang Ki Young at No. 3, Ha Yoon Kyung at No. 5, Joo Jong Hyuk at No. 7, and Joo Hyun Young at No. 8.

Meanwhile, MBC’s “Big Mouth” held onto its spot at No. 2 on the drama list for the third consecutive week, with stars Lee Jong Suk and Girls’ Generation YoonA claiming No. 4 and No. 6 on the actor list respectively.

tvN’s “Alchemy of Souls” maintained its position at No. 3 on the drama list, while KBS 2TV’s “It’s Beautiful Now” climbed to No. 4 for the week.

KBS 2TV’s “Gold Mask” rose to No. 5 on the drama list, and leading lady Cha Ye Ryun also climbed to No. 10 on this week’s actor list.

Finally, KBS 2TV’s new drama “If You Wish Upon Me” debuted at No. 8 on the drama list, while star Ji Chang Wook entered the actor rankings at No. 9.

The top 10 dramas that generated the most buzz in the second week of August are as follows: 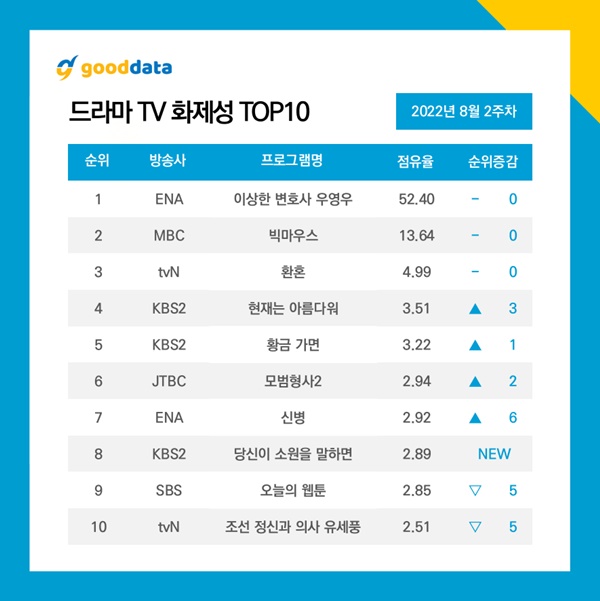 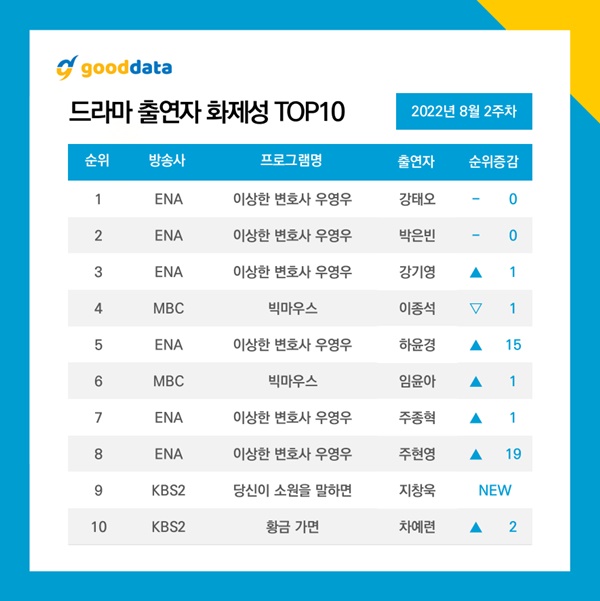