Circle Chart (formerly known as Gaon Chart) has revealed its chart rankings for the week of August 14 to 20!

THE BOYZ achieved a double crown on this week’s Circle charts, topping both the physical album chart and the digital download chart.

The group’s new mini album “BE AWARE” swept both of the top two spots on the weekly album chart, with the regular version debuting at No. 1 and the “META” version charting separately at No. 2.

NewJeans also claimed two out of the top five spots on the chart with their self-titled debut EP “New Jeans.” The Weverse version of the EP rose to No. 3, while the regular version stayed strong at No. 5.

Finally, aespa’s latest mini album “Girls,” which previously debuted at No. 1 on both the weekly and monthly charts, climbed back up to No. 4 on this week’s chart. 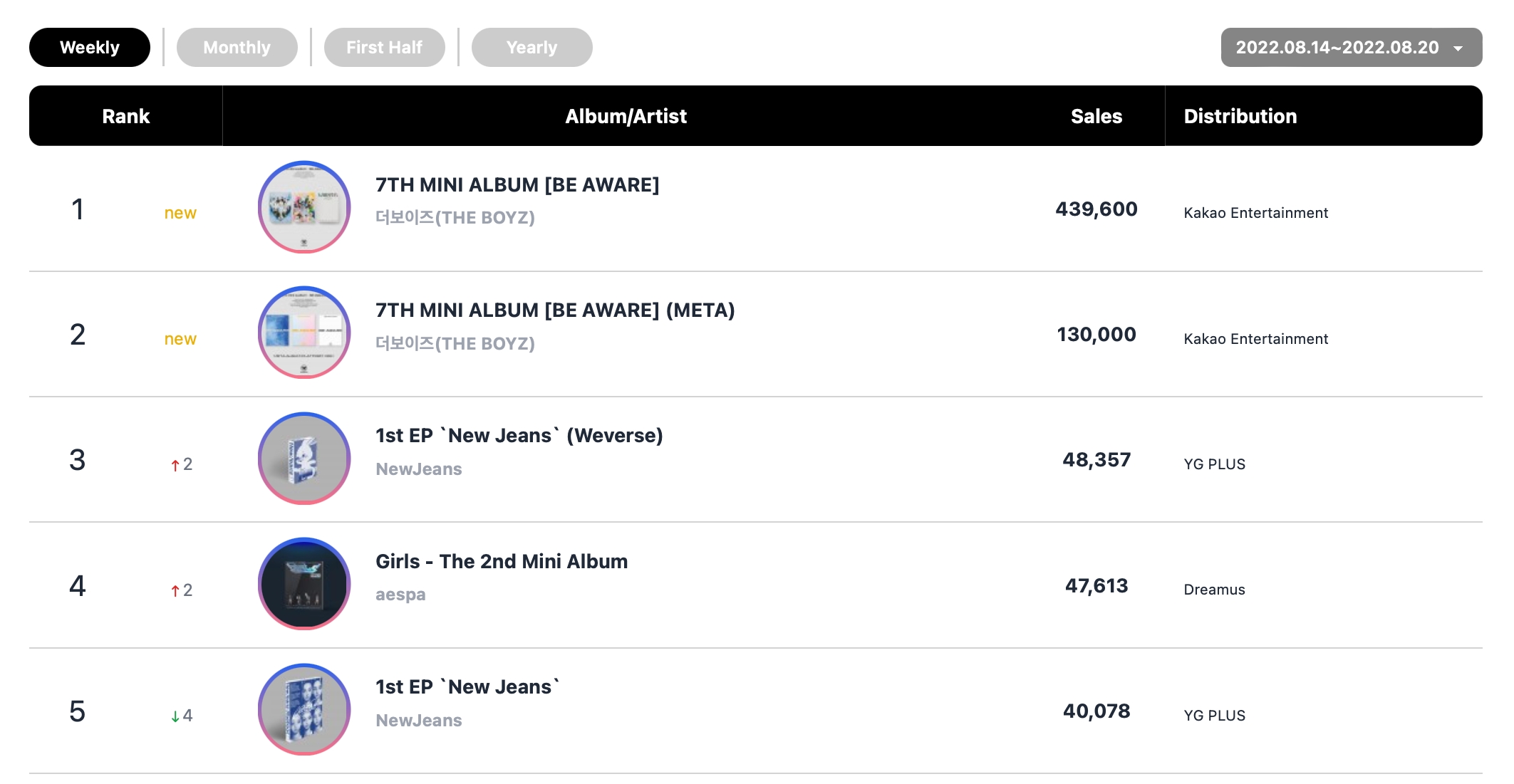 THE BOYZ topped this week’s digital download chart with their new title track “WHISPER,” which debuted at No. 1.

Lim Young Woong claimed two out of the top five spots on this week’s chart, with “If We Ever Meet Again” at No. 2 and “Our Blues” at No. 4.

BLACKPINK’s new pre-release single “Pink Venom” entered the chart at No. 3, while NewJeans’ hit debut track “Attention” rose to No. 5. 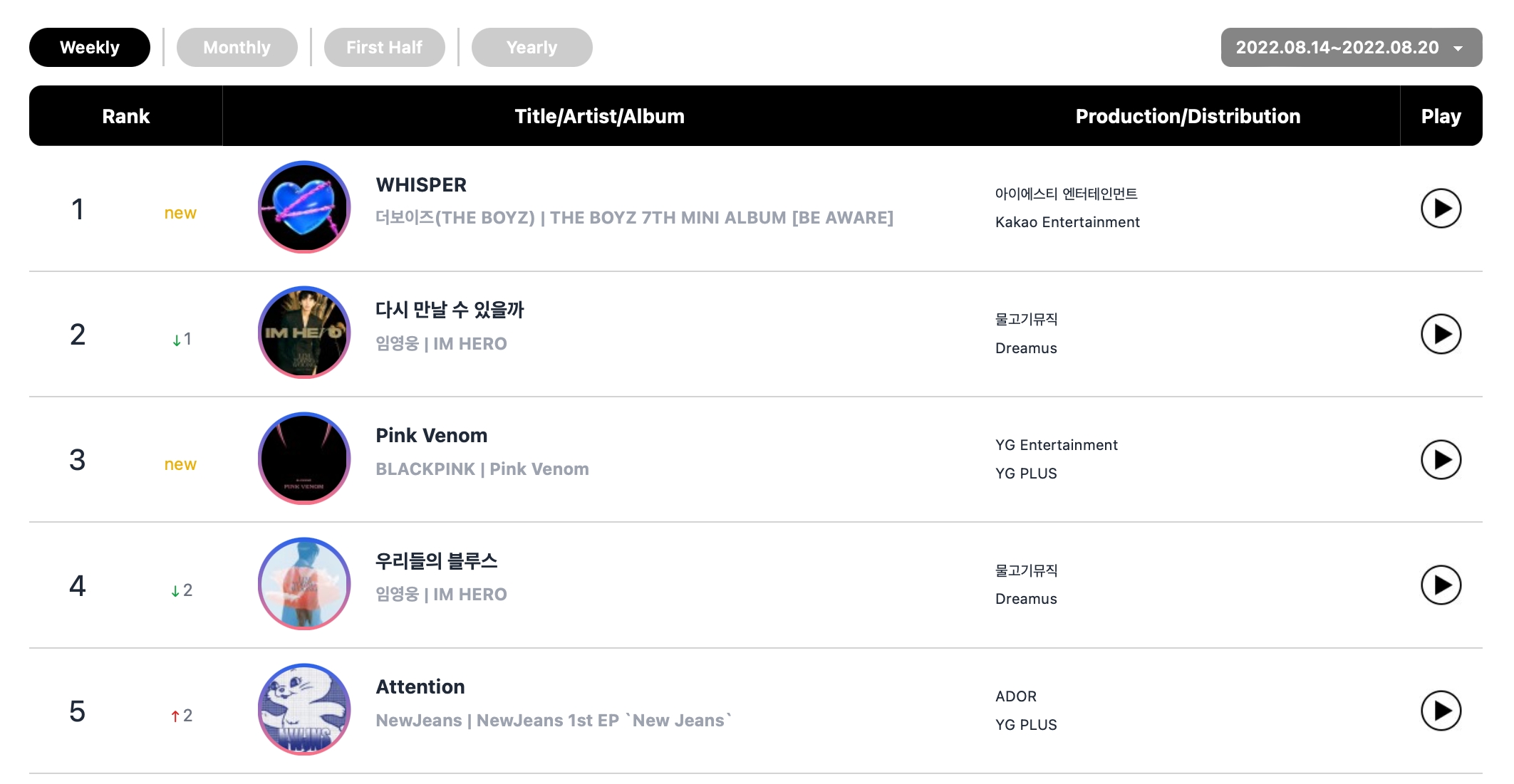 Not only did NewJeans claim No. 1 on this week’s overall digital chart with “Attention,” but their song “Hype Boy” also rose to No. 3.

“How Do You Play?” project group WSG Wannabe (Gaya-G)’s long-running hit “At That Moment” stayed strong at No. 2 this week, while IVE’s “LOVE DIVE” held onto its spot at No. 4.

Finally, WSG Wannabe (4FIRE)’s “I Missed You” rounded out the top five for the week. 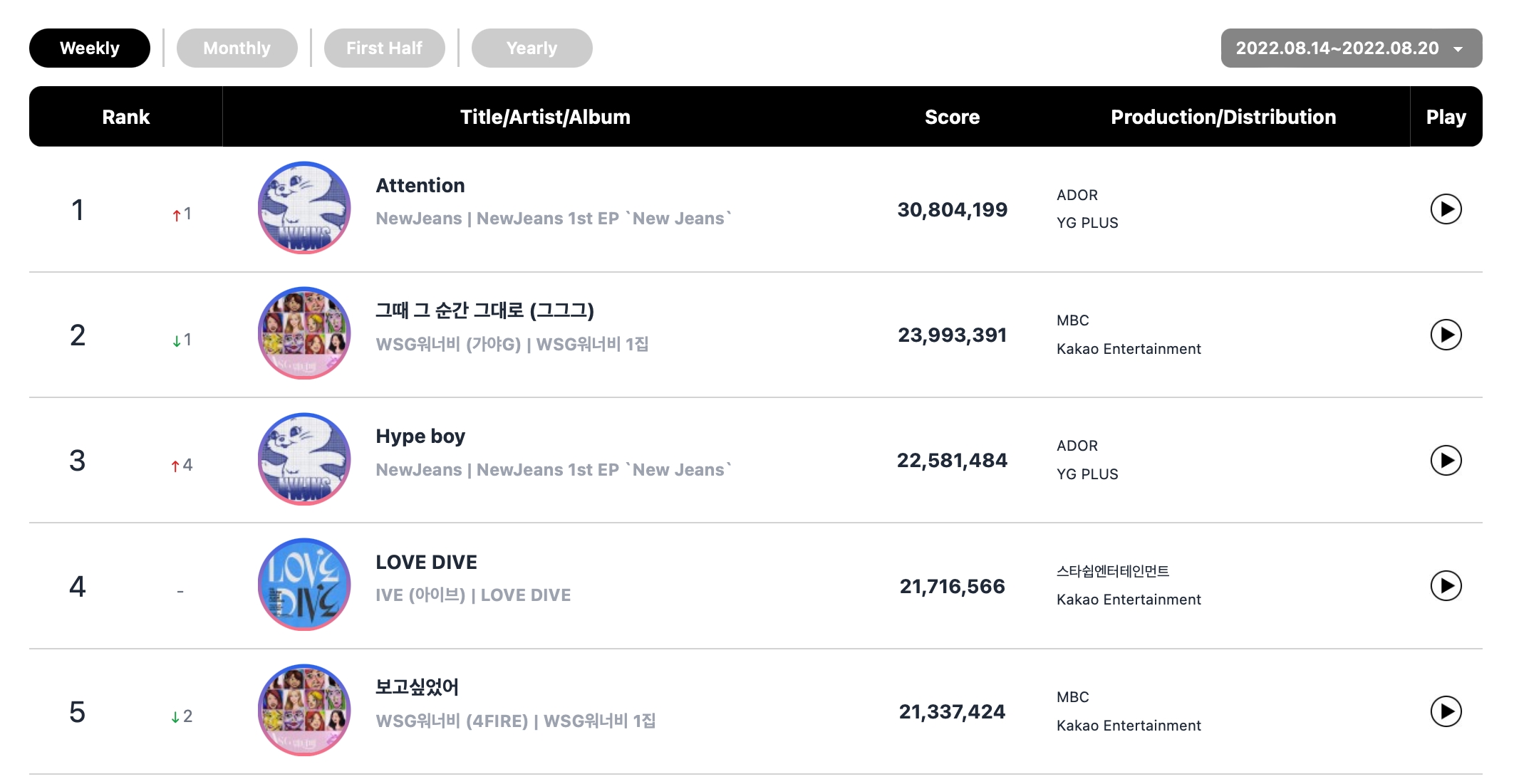 NewJeans also claimed two out of the top five spots on this week’s streaming chart, taking No. 1 with “Attention” and No. 5 with “Hype Boy.” 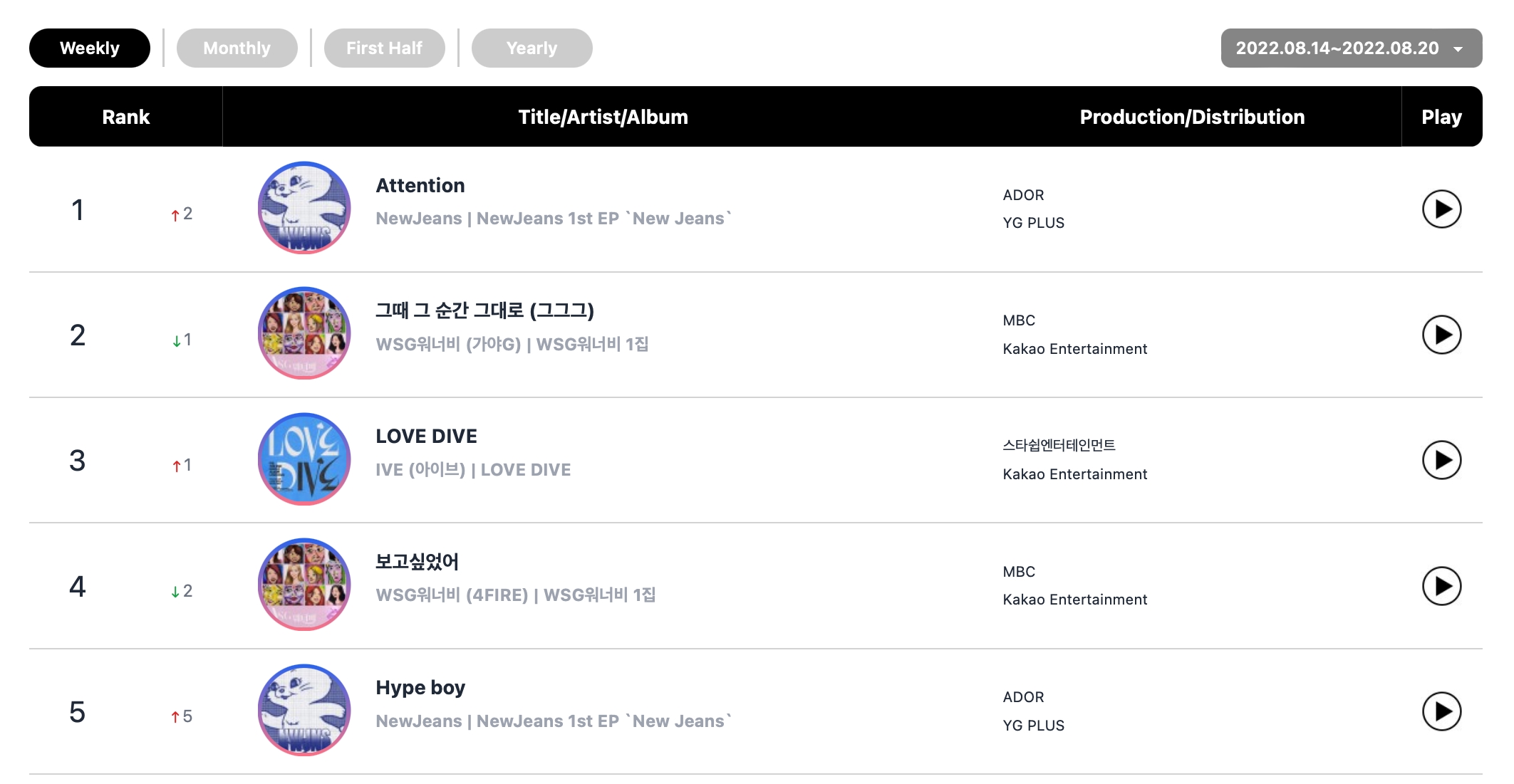 BLACKPINK’s “Pink Venom” debuted at No. 1 on this week’s Global K-Pop Chart (a new chart based on global streaming).

NewJeans swept the next two spots on the chart with “Attention” and “Hype Boy,” which came in at No. 2 and No. 3 respectively. 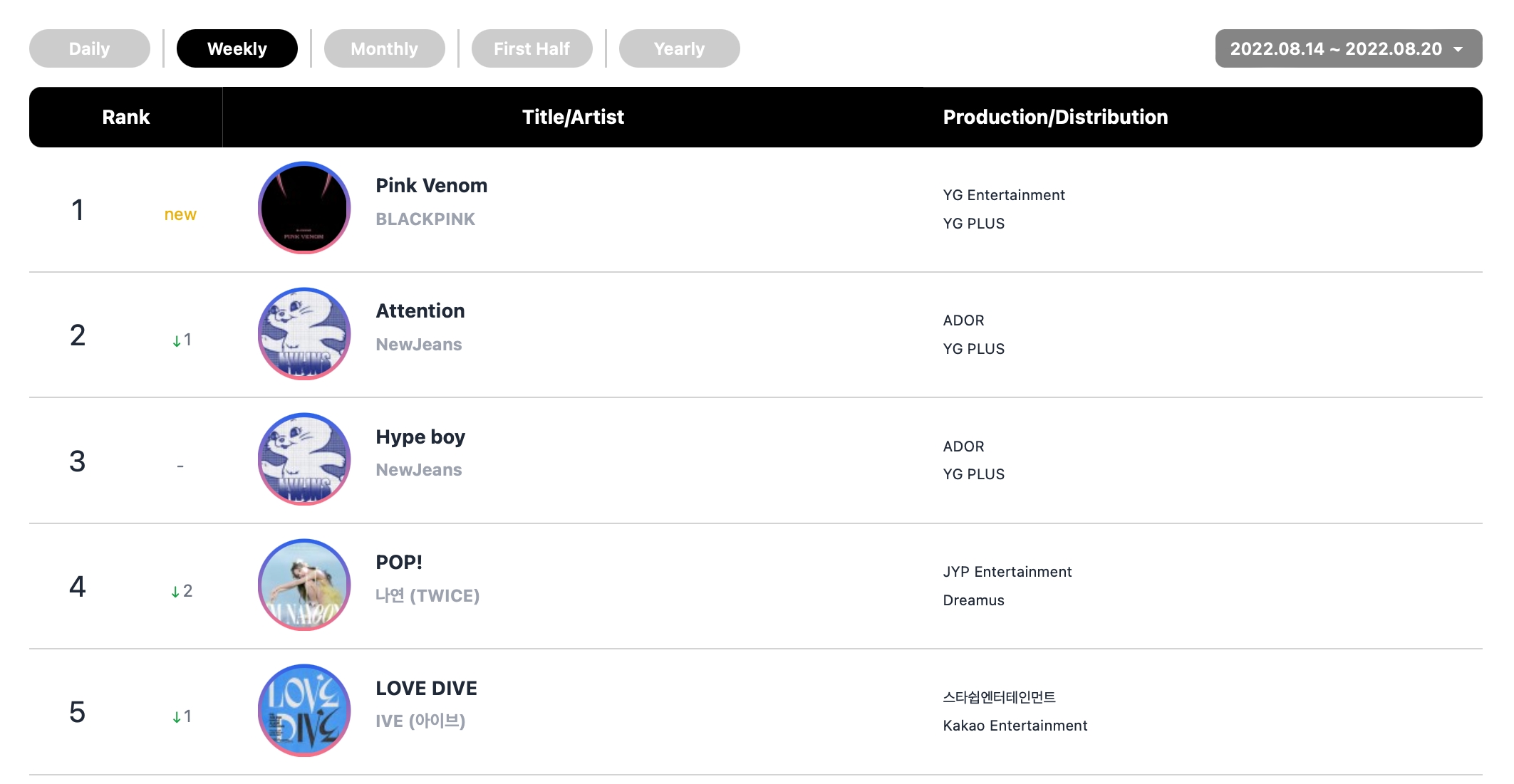 BTS continued their reign at No. 1 on the social chart, while BLACKPINK similarly maintained their position at No. 2. 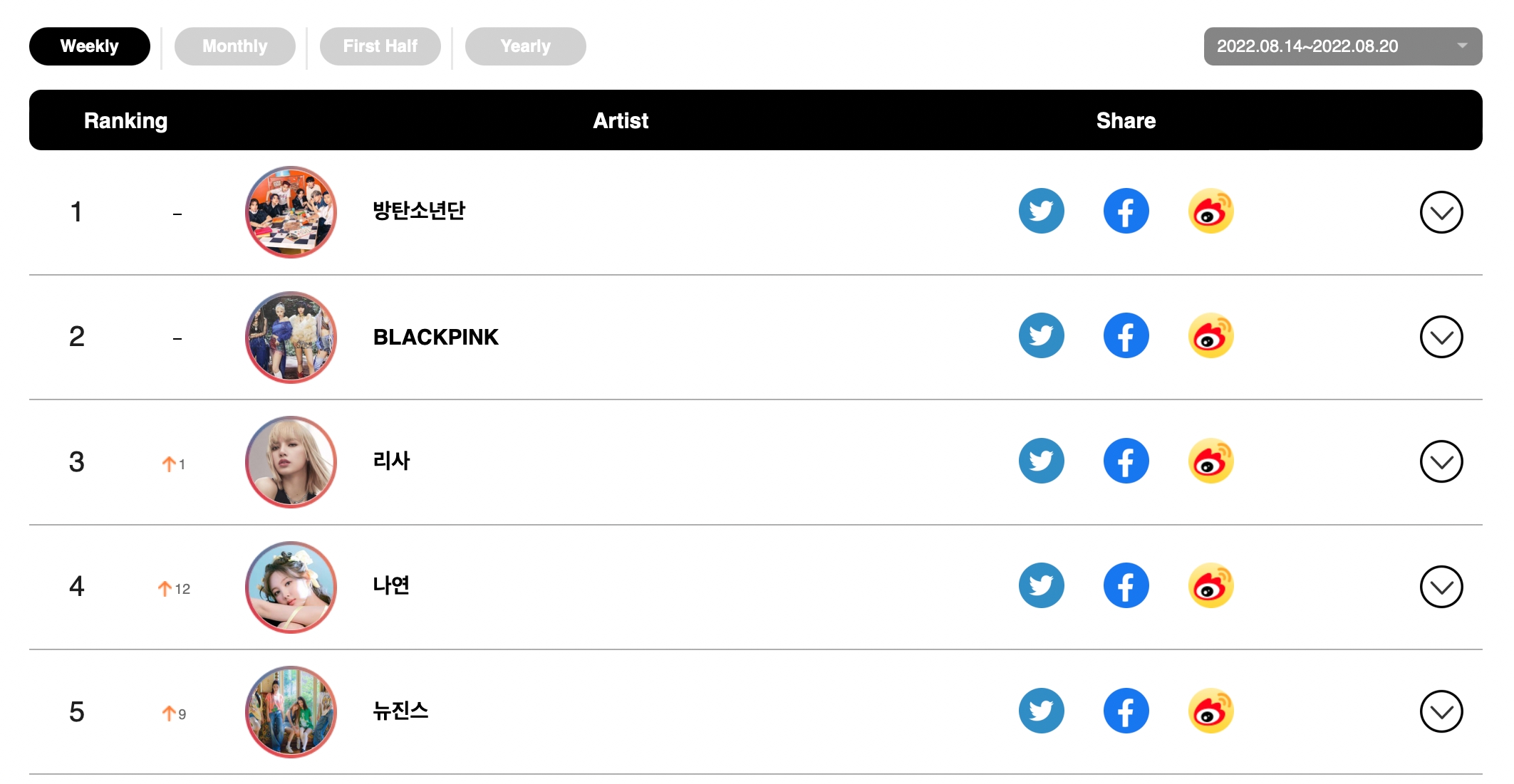