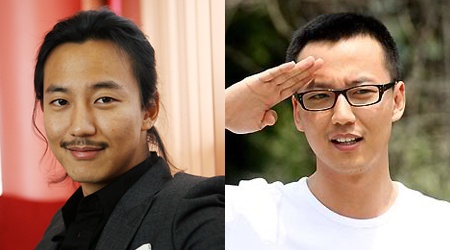 2010 Military Boys, Part I: Entertainers Who Enlisted This Year

As many of us know, South Korea institutes a mandatory military service period for all able-bodied male citizens. The service poses a problem for some men who must postpone their academic or professional careers, but it is particularly worrying to entertainers, who can only hope that the public won’t lose interest in them by the time they return. Thankfully, it seems that many fans are quite loyal. The norm for entertainers these days is to be sent off by a group of fans and reporters right in front of the training camp, right before they disappear from the public eye for almost two years. When they return, the fans and reporters will greet them them outside the gates, armed with presents, banners, and lots of questions about their official comeback plans.

Here, we pay tribute to the entertainers who left for the army in 2010. Well, we call it a tribute, but we think some of the entertainers may not appreciate the photos of “military special” haircut in comparison to their more stylish haircuts!

Kim Nam Gil lost not only the hair on his head, but an unfortunate mustache (which he’d grown for the purposes of the drama he’d been filming). Overall, we’ll have to call this one a win.

Kang Dong Won opted to bypass the public send-off by entering the military unannounced. Although this is unusual for an entertainer, we’re not really surprised; for an actor, he somehow strikes us as a rather introverted soul. However, a couple weeks later, photos of him in training camp surfaced on Korean message boards. He’s helmeted in all of them, so we still have no idea what he looks like with short hair. We imagine he’s still handsome!

When Jo Han Sun left for the army, he bid farewell not only to his fans, but also to his new wife and baby! We think his family and fans will look forward to his return, and also to the return of his hair.

This is rare, but we think Kim Ji Suk should actually consider keeping the shaved head! He looks really good!

We confess, we had to double- and triple-check this one. We’re pretty familiar with most of the Shinhwa members, but somehow maknae Andy has slipped through our radar. To make things more troublesome, he looks quite different in these pictures. We know we’re getting ourselves into hot water here, but.. this IS him, right?

Entertainers may fear that serving in the military will harm their career, but there’s a silver lining in the cloud: reporting willingly for patriotic duty can also bolster one’s image. This may have been the case for Joo Ji Hoon, who’s had a tough couple years. He looks like he misses his hair already. We do too.

Also suffering from a tough year, Super Junior’s Kangin is another entertainer who could have benefited from an image boost. He seemed to take his duty to heart, promising his fans that he would return from the military as a more mature person. We think that’s a good attitude to have.

One of Lee Jun Ki’s trademarks was definitely all that long, thick hair, so it’s really something to see him without it. We’re surprised by how young he looks — almost as if he’s going to boarding school instead of the military!

If Lee Dong Gun looks a little more mature than most of the people on this page (well, especially after Lee Jun Ki), it’s because he is: The actor postponed his service for a few years. Lee has actually been on hiatus from acting for awhile, due to a personal tragedy. Hopefully he will draw support from his fans who await his return.

Jung Kyung Ho looks pretty good, considering: one, he shaved his head (well, kind of), and two, he spent the night before his enlistment drinking with Ji Jin Hee, Gong Yoo, and Ha Jung Woo. He said the older actors gave him advice about life in the military. What a great support system!

Lee Wan looks even better when his hair isn’t in his face. His equally genetically-blessed sister Kim Tae Hee was filming and not able to see her brother off, but we figure she’s had some time to deal with it: Lee is another entertainer who was granted an extension.

Despite loving some of his songs, we have to admit we had absolutely no idea what Outsider looked like: his album cover featured him with very messy hair that obscured his face. We think the buzz cut is a step up for the super speedy rapper.

Speaking of hair in the face: It was extremely, extremely difficult for us to find a picture of Park Hyo Shin where his face was mostly visible. Maybe the military will convince him that it’s nice to be able to see out of both eyes. We hope so.

Watch out for the second half of our tribute: Entertainers who returned from the army in 2010! And we give our to all people in the military, famous or not!

Source: LOTS of websites, especially dramabeans. However, any errors are our own.