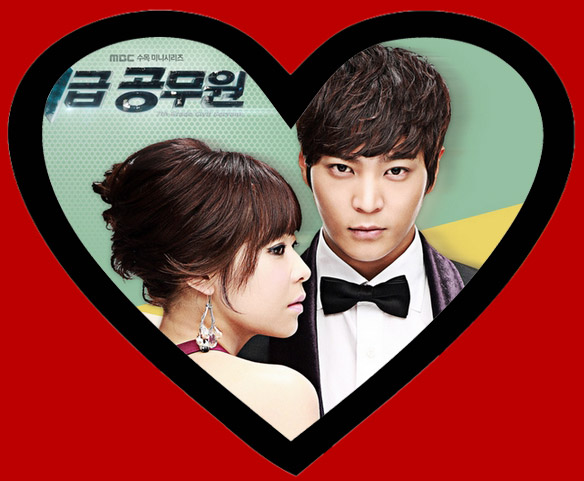 Our latest gallery is in celebration of the “noona/dongseng” (older woman/younger man) coupling of aegyo-boy Joo Won and sassy lady Choi Kang Hee in the new drama Level 7 Civil Servant, which premiered today.

Noona/dongseng relationships are nothing new in K-Dramas, and are much appreciated by older women like myself! Some of these drama-couples have a big age gap in real life while playing peers, while others emphasize the age difference in the storyline.

Let’s revisit some of our favorite couples, shall we? Their chemistry is rated on a scale of 1 to 5.

We’ll ease into this starting with a relatively innocuous gap of 6 years. Last year’s mega-hit The Moon That Embraces the Sun‘s lead couple actually had very few scenes where they are looking like a proper couple. It was mostly longing for each other in memory or from an enclosed space, and even when they were together, they were mostly facing each other from opposite sides of a table. It’s hard to say what sort of chemistry might have been.

Perhaps it could have been better if we ever got to see them together!

I recently watched 2007’s Dalja’s Spring for the first time, and really quite enjoyed it. The best romantic comedies are the ones that make you relive the magic of falling in love, which is how I felt as I watched Dalja fall in love with Taebong from a distance. However, when they actually started dating, I couldn’t fully buy them as a couple, which made me sad, but it was still a very good watch.

I really wanted to believe it, but I think Lee Min Ki was still a little green in his acting skills.

My Name is Kim Sam Soon was the show that made me fall in love with K-Dramas as an adult. The then 30-year old Kim Sun Ah and 23-year old Hyun Bin will always hold a special place in my heart.

You had me at the piano kiss.

It’s not so much the 8-year age gap that makes me uncomfortable, as much as the fact that he had just turned 17 when he played this adult role in 2010’s Flames of Ambition. His “noona-killer” status is without question, but all I can picture is a junior in high school with a 25-year-old woman.

No, I didn’t watch the show, so the chemistry may have been off-the-charts… was it? o_O

Now here’s a couple I can get behind, despite being 9 years apart, and the whole serial-killer thing. They looked amazing together in the recently completed I Miss You.

Minus one beaker for being insane!

Here’s another couple that I found believable despite the whopping 9-year difference. I can’t believe I put off watching The King 2 Hearts all this time – it’s definitely on my top 10 all-time list.

I didn’t watch I Do, I Do, but from what I’ve heard, the chemistry between the 30-something shoe designer and the young new employee was great.

Because I trust the internets.

An early on-set injury required the more appropriately aged Kim Jae Won to be replaced by the baby-faced Yoon Shi Yoon, who looks even younger than he is. I’d be lying if I said it wasn’t awkward when Lee Ji Ah would call him “ajusshi” (older man), but they eventually won me over as a couple in Me Too, Flower.

They made it work, somehow. It must be because Yoon Shi Yoon is awesome ^^.

“Oh, come on! They weren’t even really a couple – not in that body anyways.” True, true, but I’ve included them to show their age-gap in the context of their peers. Big‘s “little” Kyung Joon is actually two years older than Yoo Seung Ho – wrap your head around that one.

Because it never happened.

Now we are talking business, and by business, I mean a whole decade separating these two lovers across time in last year’s Faith. I didn’t watch this drama, but I’ve been watching Kim Hee Sun since 1997’s Propose. Talk about worlds colliding x_x.

I heard their chemistry was good – perhaps I’ll see for myself one day.

Remember, this was before Kim Bum suddenly turned into a manly winged-man in Padam Padam. He looked like a baby, and was still awful at fake-playing instruments, but he still managed to get me to root for this couple in The Woman Who Still Wants to Marry despite their 11-year age difference.

An extra beaker because they win as the most noona/dongseng-est couple!

I hope you had fun, and learned a thing or two. Tell us who your favorite K-Drama noona/dongseng couple is, and let me know if I missed anyone (I’m sure I did).

Be sure to check out our Level 7 Civil Servant thread on Soompi Forums for all the latest news and discussion about the show!

Note: Noona literally means “older sister,” but can also be used to describe an older woman that is close to you.
Dongseng means “younger sibling,” but can refer to anyone younger that you have affection for.