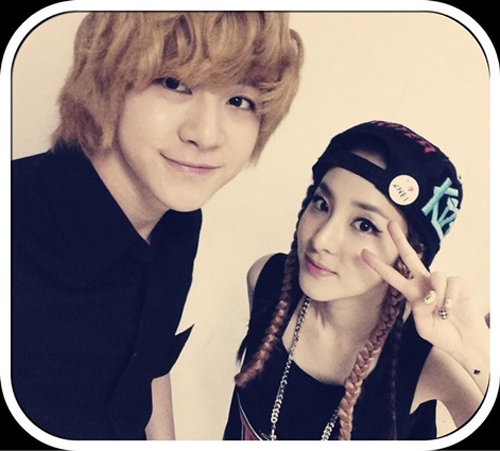 Another week has passed in the world of K-Pop and our stars are so faithful keeping us up to date with their lives! From Park Shin Hye’s movie date with a male celebrity to Girls’ Generation’s Seohyun being a sweet student, Lee Jong Suk’s sneaky post with Kim Woo Bin and Kara’s Kang Ji Young posing with her wig, lots of little bits of daily goodness are in store!

Hwang Jung Eum’s Sweeter Than Her Drink
On March 11, actress Hwang Jung Eum posted on her me2day, “Vitamin water for when I’m tired.”

Park Shin Hye’s Movie Date
On March 12, Park Shin Hye posted on her twitter, “Ah, my head hurts. I had a movie date with Jin Rak today. Had fun with 3D glasses.”

Refreshed Yubin
On March 12, Wonder Girls’ Yubin posted on her twitter, “It’s been a long time since I woke up this early. On my way to filming with a refreshing heart.”

Son Dam Bi’s Unreadable Facial Expression
On March 12, Son Dam Bi posted on her twitter, “What kind of facial expression is this at home?”

Goo Hara’s Hiking Adventure
On March 12, Kara’s Goo Hara wrote on her twitter, “Took a picture at the top of Baek Woon mountain. It was a great day for hiking! Love it.”

Sweet Student Seohyun
On March 12, an online community forum posted a picture of Girls’ Generation’s Seohyun while she was in class.

Yoon Hye’s Perfect Weather
On March 12, Rainbow’s Yoon Hye wrote on her twitter, “I love this grayish weather! Oh yea! People say that one should have Korean pancakes when it rains. I’m on my way to work. The picture portrays me craving some Korean pancake.”

Lizzy’s Self-Marketing
On March 13, After School’s Lizzy posted on her twitter, “‘Kiss Me’ is an eye’s lifeline. Ah small eyes became big eyes.”

Supportive Uee
On March 13, After School’s Uee posted on her me2day, “On my way to work when I saw this woo-ahhhh!!!!!!! It feels weird seeing a huge picture of me hanging near a main street in Gangnam. Heh! H. Connect’s faceboook page has been launched. Please love H. Connect and Uee a lot! ♥”

Lee Jong Suk’s Sneaky Post
On March 13, actor Lee Jong Suk posted on his me2day, “I filmed a CF with Woo Bin! He’s a friend, but he gives a ‘hyung’ vibe. We’ve been apart for two days, so he looks more lovely. I’m uploading this picture without telling him so this will be a secret between us.”

f(x) in Texas
On March 13, f(x)’s Luna posted on her me2day, “I came back after successfully performing at the huge music festival SXSW as K-Pop’s representative along with seniors No Brain and Guckkasten. Click. Everyone, I really want to see you.”

Park Shin Hye Is Philippine Bound
On March 15, Park Shin Hye posted on her twitter, “I’m leaving for the Philippines! Ah~ Anxious! Everyone, see you later.”

Kwon So Hyun’s Selca Expertise
On March 15, 4minute’s Kwon So Hyun posted on her twitter, “Thailand. Before the press conference. I take very good selcas.”

Sandara’s Brother Is an Eligible Bachelor?
On March 16, 2NE1’s Sandara Park posted on her twitter, “With my tall, cute and handsome little brother Thunder!” (Note: She wrote it all in English!)

MC Minah
On March 16, Girl’s Day’s Minah posted on her twitter, “Today is MBC ‘Music Core’!! 3:50pm!!! With Jokwon oppa~ With Seulong oppa~ We spent some time rehearsing for our special emcee appearance so please watch us favorably.”

G-Dragon’s Fan, Park Ji Min
On March 17, 15&’s Park Ji Min posted on her twitter, “I listened to G-Dragon’s song a while ago and tried to copy him. I’m sorry to the fans. Please watch over me cutely.”

Sandara’s Shocked?
On March 17, 2NE1’s Sandara posted on her twitter, “Thank you A+”