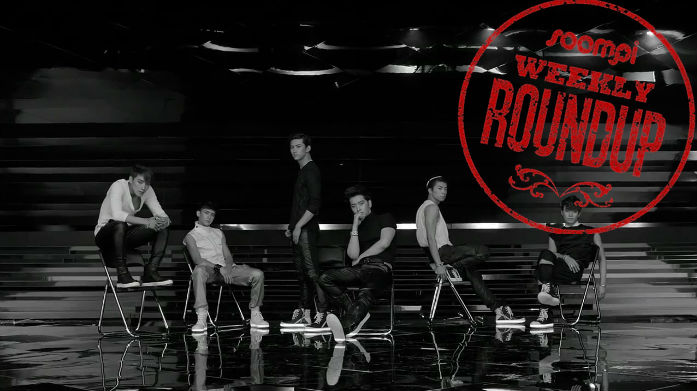 Welcome to the Soompi Weekly Roundup ! Every weekend we will highlight all the important news that happened this week, so you can catch up on anything you may have missed.

This week was all about relationships, especially with the very big wedding announcements. Instead of comebacks we had some exciting teasers but our music video of the week will go back to the past. Celebrities showed their love for their moms by celebrating Mother’s Day, f(x) had their bodies compared, and has Kang So Ra found the secret trick to looking great without dieting?

Next…Core Contents gets owned by a teenager.

Gossip of the Week: Core Contents Media‘s homepage was hacked not by some mysterious T-ara anti-fan hacker but by a high school student who just wanted to see if he could do it. Either the kid is a genius or the website was hosted by Geocities. Sometimes it feels like the company goes by the motto, “There is no such thing as bad publicity.” That is the only explanation for their potential collaboration with Chris Brown. Does anyone else find the combination ironic?

Runners Up: Yoon Jun Hyung is doing fine after breaking up with Goo Hara, thank you very much. Netizens are not happy with Lee Jang Woo and Oh Yeon Seo, whether they are dating, just friends, secreltly married, secretly siblings, spies for North Korea, or whatever.

Next….Guess who is coming back, for real this time?

Teaser of the Week: EXO-K and EXO-M finally got sick of performing “Mama.” SM‘s newest group is finally making their comeback and they are teasing us little by little. No official comeback date yet but that just means we are going to get more teasers before then, and with these visual guys that is just fine.

Runners Up: 2NE1‘s CL is making her solo debut and she’ll be busy with that and 2NE1’s comeback. After being teased by YG, a lot of fans are really anticipating this long awaited comeback. Boy band VIXX goes dark and shirtless for their comeback teasers.

Next…A blast to the past…

MV of the Week: There were a lot of music videos out this week but H.J.g.R‘s “May I Love You” wins the top spot for many reasons. First, these guys are in their thirties and they try really hard for this music video. Second, 90’s K-Pop is amazing. Third, they did a cover of NRG, a group that was underrated then and now.

Runners Up: So many things to say about 2PM‘s music video for “A.D.T.O.Y.” The self-hugging, self-touching, pants pulling, sexual tension, lazy on chair dancing, and Wooyoung‘s electrified hair makes it worth watching. Shinhwa tries to bring back vogueing but I can’t imagine this being too popular in the clubs.

Next…Sooyoung goes through a drastic change for her drama role…or not.

Drama Moment of the Week: Is it just me or does this drama version of Sooyoung look more like her than any performance version of her?

Runners Up: Song Seung Hun gets pretty close to Shin Se Kyung, but reading the comments it doesn’t seem like the actress is too popular with Soompiers. Actors and singers join and leave the cast for the future drama, “Heirs.“

Next…Who would dare mess with the Monday Couple?

Variety Moment of the Week: Jinwoon, you already have an adorable wife, do you really need to make Gary jealous over Song Ji Hyo?

Runners Up: SHINee goes on Dream Team and gets all the fans worked up with their charming antics. Choi Kang Hee and Seo In Gook play it cool about their lesbian and gay rumors.

Next…The most popular gallery this week was filled with beautiful girls, figures.

Gallery of the Week: Everyone has their opinions but a recent poll asked who the most beautiful visual of girl groups were and Suzy took the number one spot. Just being the visual of a group makes you a winner so there were no losers here.

Runners Up: The Dream Concert had everyone’s favorite groups, and there’s two parts! Sometimes it’s nice to take a break from looking at beautiful people to looking at delicious food. Yum.

Pictorial of the Week: Tiffany always looks amazing in her photo shoots but in this gallery you can see pictures from her first and more recent photos for 1st Look.

Runners Up: Jo Kwon and Rainbow’s Oh Seung Ah make a charming wedding couple and Kara’s Gyuri may play a tomboy but she’s all women for Esquire.

Next…Taeyeon is a great daughter and a great mother?

SNS Pic of the Week: Taeyeon buys her mother a very generous gift for Mother’s Day, and announces that she has a new baby. Lucky mom and lucky adorable puppy!

Runners Up: G-Dragon does a fashion no-no and Super Junior’s Siwon and Jung Ryeo Won take a picture with a world renown fashion designer.

Next…Guess which celebrity took over the headlines this week?

Celebrity of the Week: With 2PM‘s long awaited comeback, leader Taecyeon has taken to the talk shows to talk about everything from past rumors to his first love. The other members had plenty to say too. After all, they’ve been gone for a long time.