Last night, NCT 127 officially kicked off their very first tour of the United States with an electrifying concert in Newark—and the group made clear that they are fully aware of just how important this moment is to them and to K-pop as a whole.

On April 24, NCT 127 lit up the Prudential Center in a sea of green during the first stop of their ambitious North American “NEO CITY – The Origin” tour, which will take them to nine different cities in the United States and a total of 12 cities across North America—an unprecedented number for a Korean boy group.

With NCT 127 having just wrapped up their tour of Japan and preparing to take their tour to other countries as well (they recently announced that they would be heading to Russia after North America), their group introduction “To the world!” has never seemed so apt. Throughout the night, the NCT 127 members repeatedly expressed their excitement at being able to meet their fans abroad, and Mark mentioned that he was honored to be able to bring K-pop to the rest of the world.

“I feel like what we’re doing today and what we’re doing [with our] tour—it’s not something that should be thought about lightly,” said Mark. “Bringing K-pop [to North America] right now, there’s a significance to that. I’m very, very grateful.”

The many fans who attended the concert seemed just as grateful to be there—from the moment that the NCT 127 members first began appearing on stage one by one, the crowd went wild, and the group’s high-energy performances did nothing to diminish their excitement.

The concert was particularly special because it featured the premieres of no less than three of NCT 127’s new songs from their upcoming mini album “We are Superhuman.” Although the group first gave fans a sneak peek of their title track “Superhuman” on ABC’s “Good Morning America” last week, their Newark concert marked the very first time that they performed the full version of the highly-anticipated song. They also unveiled two other tracks from their upcoming mini album: “Jet Lag,” which they performed live, and “Highway to Heaven,” which they revealed in a special video that was played towards the end of the concert. 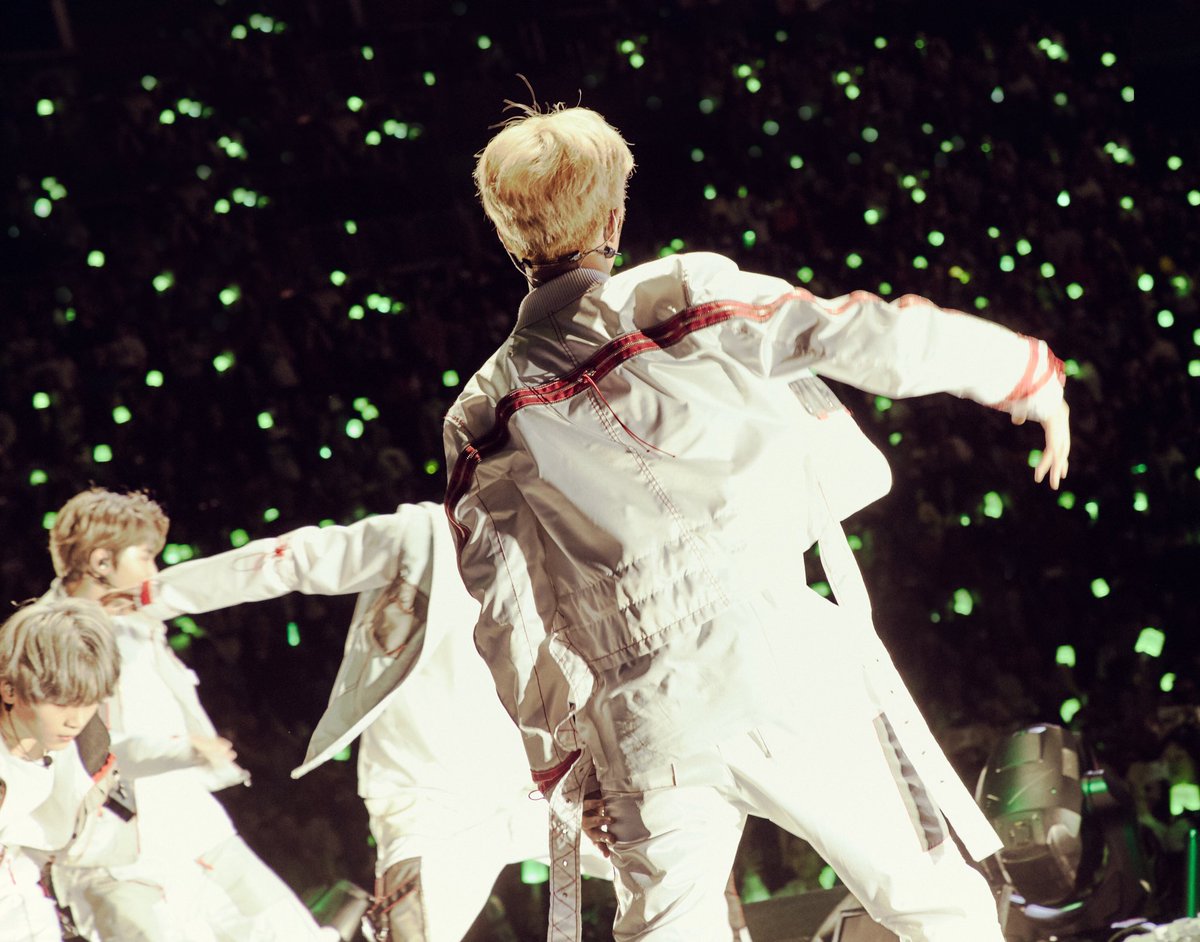 After they performed “Superhuman” to the cheers of the thrilled audience, Jaehyun commented, “Did you guys really like the new song? People told us not to do it, because we didn’t have a lot of time to prepare, but we really wanted to show you guys this [song], so we worked really hard.” Doyoung chimed in, “Yes, we slept less so that we [could] perform this song for you guys,” and Mark agreed.

Doyoung went on to reveal, “We shot the music video for ‘Superhuman’ the day before we came to the United States. You’ll be able to see it on May 24. I think the music video will be really cool and the album will be great, so I’m looking forward to both.”

Haechan added, “There are other tracks [on the mini album] aside from the three songs that you heard today, so please look forward to it a lot.”

In addition to their new songs, NCT 127 used the concert to showcase their exceptional versatility as singers. The group kicked things off with a few of the powerful dance performances for which they are best-known—after starting the show with a special remix of the English version of “Cherry Bomb,” in which each of the nine members took turns performing a solo dance break in the spotlight, they moved on to fan-favorite songs “Come Back,” “Limitless,” and “Chain,” all of which allowed the group to show off their signature razor-sharp dancing skills.

However, the next segment of the concert proved equally—if not more—impressive, with NCT 127 proving they could do it all as they shifted into slow gear and wowed the crowd with their incredible singing. During the songs “City 127,” “Angel,” “Jet Lag,” “Timeless,” and “No Longer,” the audience’s amazement at the group’s beautiful vocal harmonies and stunningly high notes was audible.

Jaehyun remarked, “We usually perform very strong performances on stage, but today, we wanted to show you guys this warm-hearted side of us.” Mark echoed his sentiments while introducing the ballad “Timeless,” commenting, “NCT: what we’re known for is to be very diverse, and we have a lot of sides and a lot of colors [to] our music. This particular next stage shows us the sweet and emotional, sentimental side of NCT 127.”

Haechan also took the opportunity to get a little flirty with the crowd, asking, “Now that we showed you an emotion-filled song like ‘Jet Lag,’ doesn’t it feel like we went on a date?” As Johnny and Mark jokingly scolded him, Jungwoo playfully responded, “It’s our first official date with our fans. Wow.”

NCT 127 did their best to interact with their fans throughout the evening, speaking almost entirely in English during the concert and playfully joking around with the crowd between songs. One of the most memorable performances of the night was “Replay (01:27 PM),” during which the NCT 127 members brought their own light sticks on stage and directed the crowd’s movements, with all of the fans following along as one.

green ocean was so pretty omg ?

everyone was following the way nct moved their lightsticks during 'replay' and it was the most beautiful thing ever ajsjja#NEOCITYinNJ #NEOCITYinUSA #NCT127inNJ #NCT127 #NCT pic.twitter.com/rit5mPN7Gy

The members also expressed their heartfelt gratitude to their fans for their love and support. Towards the end of the show, Doyoung remarked, “Usually, around this point, I get a little tired. But because of your cheers, I’m not tired at all.” Mark added, “I feel like we have chances to perform in front of you guys even when it’s not a concert, like TV shows or events outside, but I feel like having our own concert like this is what brings it to another level, and I’m so grateful to be here with you guys.”

Taeyong similarly commented, “I think this moment is a gift that you guys gave us. I will forever treasure this gift.” Meanwhile, Jungwoo told the fans, “Please look forward to us maturing and sharing that process with you.” Johnny added, “Thank you guys for loving us as you have so far—unconditionally. We will always make sure that your love is given back. We will make sure that this precious time together will be in our memories forever. Thank you guys for being a part of that.”

Mark also explained, “‘NEO CITY – The Origin’ is the name of our tour, and ‘The Origin’ means that from this point on, it is our new beginning.” Yuta chimed in, “When we heard that we were having our first solo U.S. tour, we were super happy,” and Haechan agreed, “Yes, we worked hard to meet you all.” 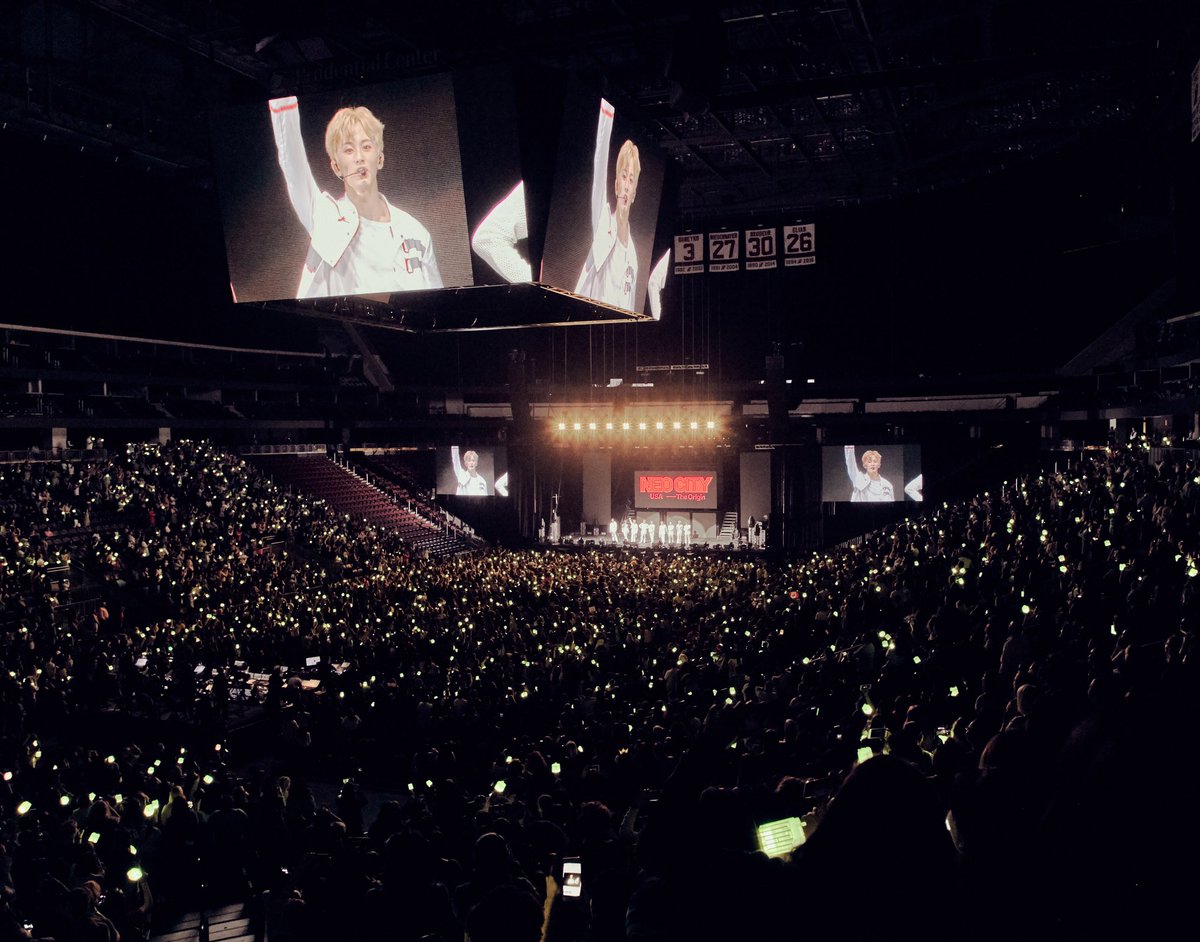 At the end of the concert, NCT 127 said their goodbyes and shared their thoughts on what was an especially meaningful night for the group. Taeyong remarked, “It is an honor to be here. Thank you for having us. I’m so happy in my life because of you guys. [Before tonight], we had only ever been to this venue to perform at KCON. Many people have been waiting for us since then, and I’m so happy that we were able to meet again like this.”

Mark added, “Thank you guys so much for showing up today, and I’m going to be honest. Before we even started the tour, I was nervous, because we had to bring this K-pop culture and all that we did to North America, and I feel like I want to thank you guys for being our confidence and allowing us to do what we do. I think that’s the best relationship any performer can have [with their fans]. I promise we’ll see each other again, and all I can say is thank you.”

Jaehyun chimed in, “I really wanted to say this while performing, but your energy is amazing. I [was] really touched by that energy, and I hope you guys have a good memory of today and keep up the good work you’re doing and feel our energy. Thank you so much. Let’s keep this good relationship going.”

Jungwoo similarly remarked, “We kicked off our first North American tour here in New Jersey [tonight], and I was so touched by your passion. Knowing that so many people are cheering us on, we will work hard so that we can show you even better things. Thank you.”

Taeil asked, “Did you guys have fun? We also had so much fun, and I think we really enjoyed ourselves during the concert tonight. I hope there will be many more opportunities for us to spend time together with our fans like this in the future. We will try to become an even cooler NCT 127 and have even more fun.”

Johnny commented, “If you guys had fun, this concert was a success. Throughout the show, I’ve been telling you guys, ‘Let’s be the happiest people on the planet today,’ and I think I am today. And I just want to thank you guys so much, and this was the best kickoff of a tour that any person could have!” Mark happily interjected, “We’re off to a good start!”

And with that, NCT 127 jumped into their final performance of the evening. The group wrapped up the show with a playful rendition of their 2017 B-side “0 Mile,” with the entire crowd joining in to dance to the signature choreography during the chorus. The song, with its lyrics about wanting to get closer to a loved one on the opposite side of the world, felt like the perfect musical summary of what NCT 127 had been telling their fans all night. 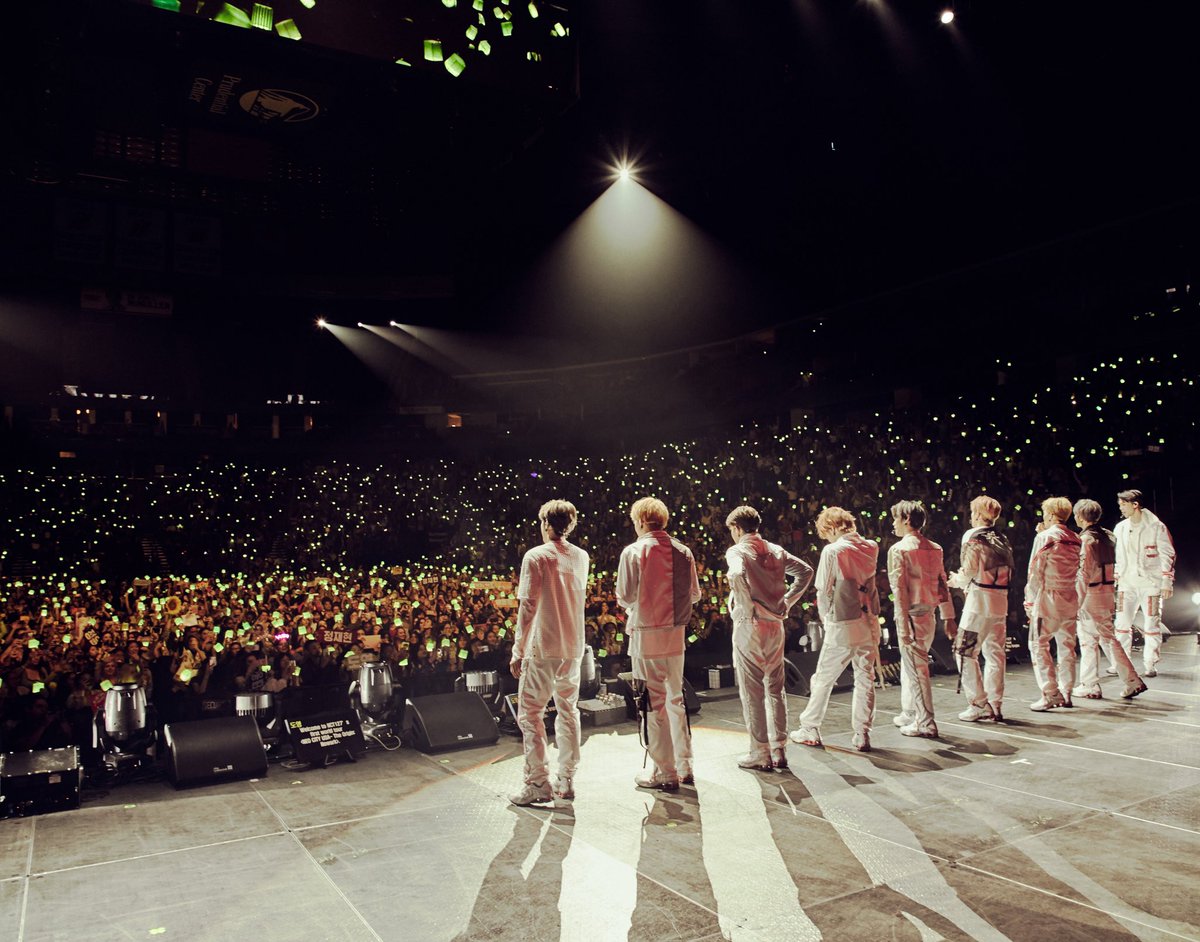 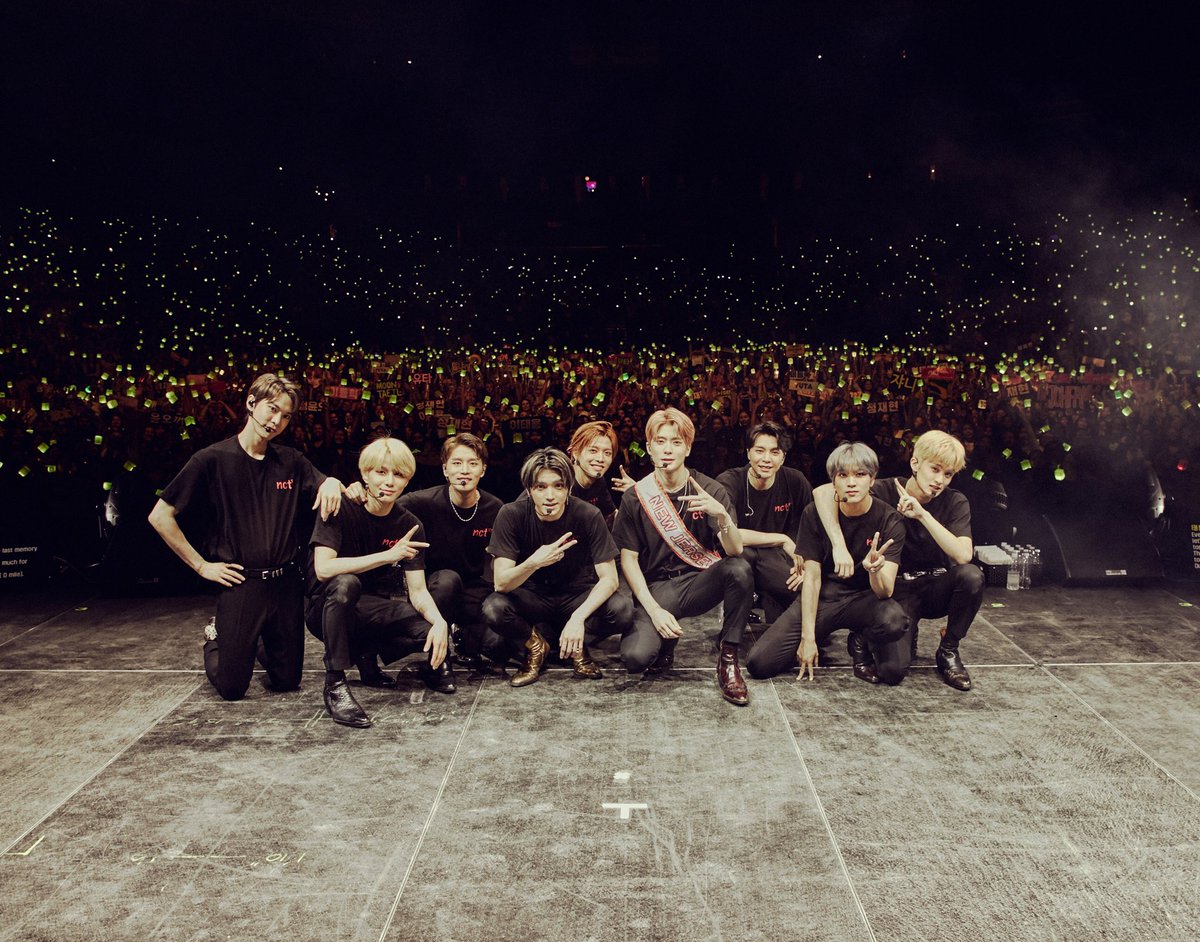 Soompi Spotlight
Soompi Exclusive
NCT 127
How does this article make you feel?