As Stray Kids stormed onto the U.S. K-pop scene last night with the first concert of their sold-out tour, they had a clear message: they have arrived, and they are ready to write the next chapter of their story.

Last night, the rookie boy group kicked off their very first tour of the United States with the first of two concerts at the New Jersey Performing Arts Center in Newark (due to high demand, SubKulture Entertainment ended up adding another show to the tour after tickets sold out in the blink of an eye). Just one year after their official debut in 2018, Stray Kids has already amassed a sizable and devoted fanbase, and their fans’ immense love and passion for the group and their music was palpable throughout the night.

Despite the fact that they’ve only been around for one year, Stray Kids has already managed to do something that many young K-pop groups struggle with: carving out their own identity in a saturated market. The group’s members have co-composed the music and lyrics for every single track that they have released thus far, and all of their songs focus on telling stories that are specifically about the struggles of youth.

Perhaps because of this relatable subject matter, many of the fans who attended Stray Kids’ first U.S. concert on May 14 clearly had a deep and personal connection to the music: even before Stray Kids stepped foot on stage, the audience was already singing their heart out to several of the group’s songs, including the introspective B-side “Question,” in perfect unison.

The crowd’s pulsing energy continued throughout the night, with the fans singing along to almost all of the lyrics, and the Stray Kids members repeatedly expressed their amazement at how passionately their fans were singing and dancing alongside them—as if performing together with the group. At one point, Lee Know asked with a laugh, “STAY, you guys aren’t tired? I think you all sing and dance better than we do. Really, you guys are amazing.” Bang Chan also joked, “Maybe you can come on [stage] next time and we can do it together.”

But as the night went on, Stray Kids made clear that despite having successfully forged an identity as a group that tells the stories of youth, they are ready to move forward and take their next steps into the future. Showing remarkable poise and awareness of the direction they want to take next, the Stray Kids members declared that they were leaving some of their teen angst behind as they begin a new, more mature chapter of their story.

Changbin explained that with their latest mini album “Clé 1 : MIROH,” which the group promoted with the fierce, confident tracks “MIROH” and “Victory Song,” the group was moving away from the conflicted uncertainty of their previous releases “I am NOT,” “I am WHO,” and “I am YOU.”

“If the ‘I am…’ series that we’ve shown you up until now told the stories of uncertain, anxious youths,” said Changbin, “then the new story that we just showed you [through our latest songs] is the story of youths standing on the edge of adulthood. We wanted to tell this new story in a powerful way through ‘Victory Song.'” Seungmin chimed in, “So please look forward to this new story that we have just started. Keep an eye on us.”

I.N also expressed the group’s determination to leave their mark on the K-pop scene, commenting, “Just like the lyrics [to ‘District 9‘], we will work hard in the future so that we can ‘shake everything up.'”

Bang Chan added, “Through STAY, we feel like we can go anywhere. As we’re starting this new story that Seungmin just [mentioned]—whatever maze, whatever wall, whatever obstacle we come across, we know that as long as we have STAY, we can overcome it. We can just break through all the walls. As long as we have you guys, we can do anything.” 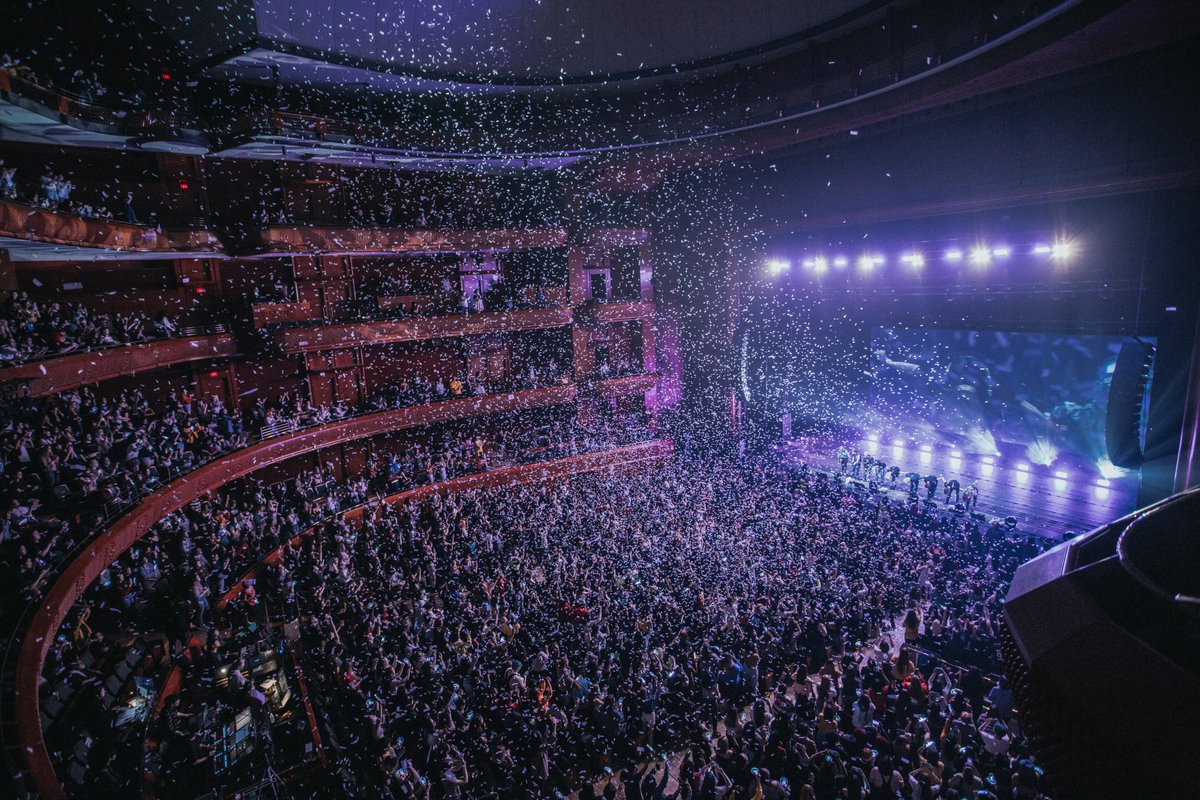 Highlighting the growth achieved by Stray Kids over the past year, the group’s “Unveil Tour ‘I am…'” is carefully designed to lay out their releases in chronological order. A pre-recorded video clip played during the concert also revealed that the idols paid careful attention to organizing the set list so that their songs’ lyrics would tell a linear story of growth. After beginning with the emotional turmoil of the group’s early tracks (such as “Hellevator,” “Grrr,” and “Mirror“), the concert took a more optimistic turn with the self-affirming “Voices” and “My Pace,” before ultimately building up to its triumphant climax with “Victory Song” and “MIROH.”

Toward the end of the show, Woojin thanked the fans for their passionate support, remarking, “Honestly, our ‘Unveil’ tour consists mostly of performance-focused songs, so there are occasionally times when we start to feel tired. But when we see STAY’s faces, it’s impossible not to give it our all and do our best for every single move.”

Although Stray Kids had performed in Newark once before—at last year’s KCON NY—the night marked their very first solo concert in the United States, and Hyunjin commented humbly, “I don’t know if this is a dream or reality.”

He went on to explain, “Last year, we performed at KCON, and we received a really great response, but it wasn’t only us performing. Now, we are standing in front of so many STAY. It’s such an honor to be able to perform for you like this [at a concert of our own] even though it’s only been one year [since our debut].”

Han added in English, “First, I’m really happy that we can perform our ‘Unveil’ tour in the U.S., and I’m also happy that I got to see you again. Thanks to you guys for coming and enjoying [the show] with us today.”

Felix also repeatedly expressed his gratitude to their fans, saying, “I’d just like to say thank you so much for showing us so much love. It really keeps us going. And thank you so much for coming here to watch our show today, for sacrificing your time for us. I’m so honored to be here and to perform for you guys.” He later added, “We’ll never forget this night.”

As they embarked on a new, more self-assured chapter of their story, Stray Kids also encouraged their fans to be just as confident in themselves. Just before the group wrapped up the night with an emotional rendition of their reassuring song “Grow Up,” Bang Chan implored the crowd, “Don’t ever doubt yourselves, okay?” 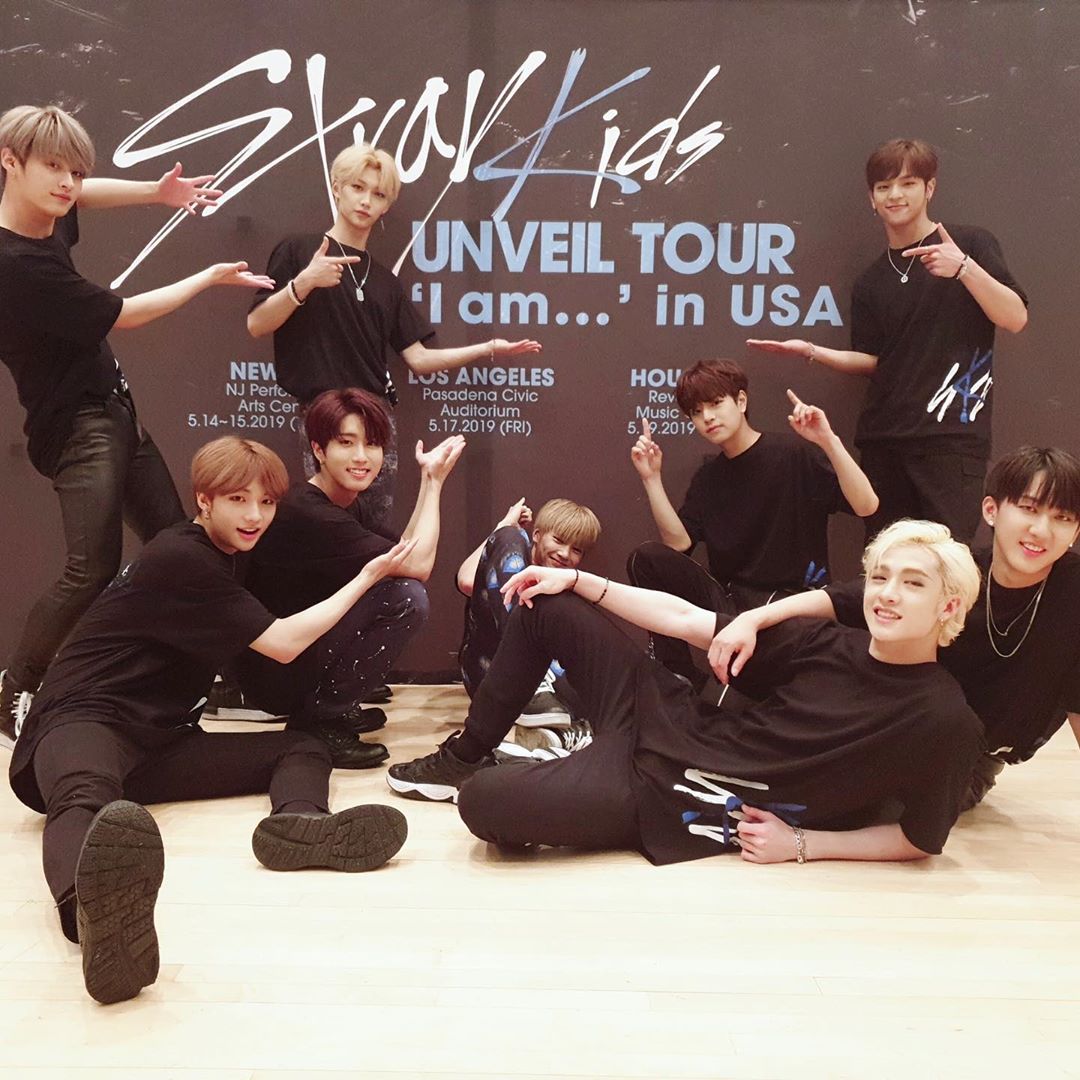 Stray Kids
Soompi Spotlight
Soompi Exclusive
How does this article make you feel?