The final lineup has been announced for the 2019 Soribada Best K-Music Awards (hereafter 2019 SOBA)!

The lineup for each day is as follows:

Both ceremonies will be held at Olympic Park KSPO Dome in Seoul. 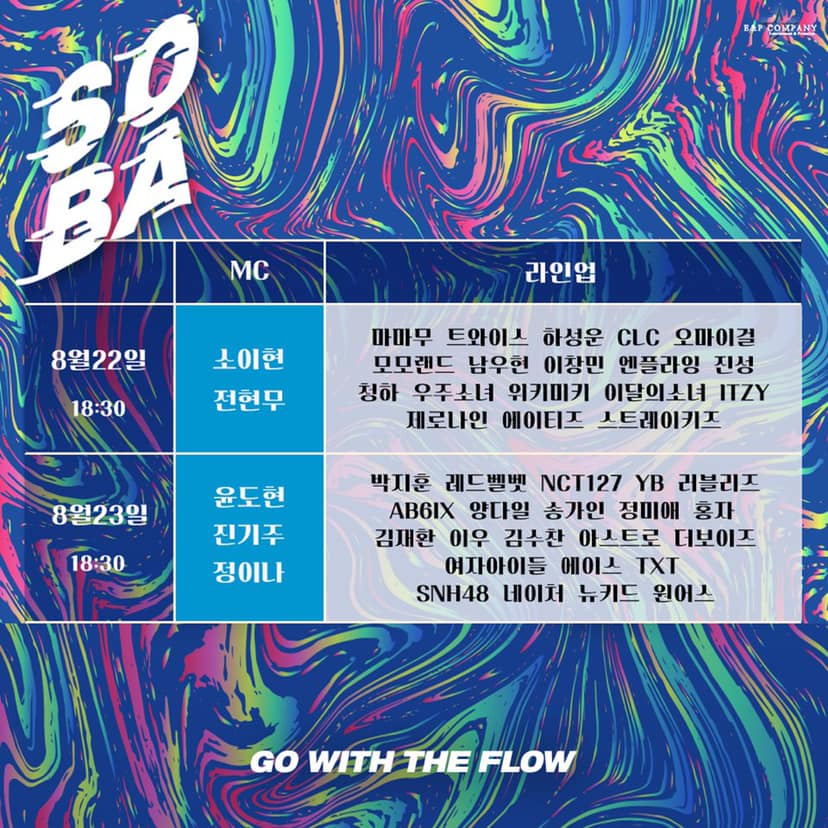 The next set of artists has been announced for 2019 SOBA!

It was revealed on August 9 that LOONA, A.C.E, ONEUS, NewKidd, Vietnamese group ZERO 9, and Chinese group SNH48 will be in attendance.

More artists have been announced for 2019 SOBA!

On August 6, it was announced that ITZY, NATURE, Lee Hyun, Yang Da Il, and Lee Woo will be attending the event.

The next lineup has been revealed for the 2019 SOBA!

On August 5, CLC, Oh My Girl, Weki Meki, The Boyz, and ATEEZ were confirmed to attend the ceremony.

2019 SOBA has announced the third lineup!

It was revealed on August 2 that MAMAMOO, Lovelyz, WJSN, (G)I-DLE, and Stray Kids will be in attendance at the awards show.

The second lineup has been unveiled for 2019 SOBA!

On August 1, it was announced that Red Velvet, NCT 127, TXT, and AB6IX will be attending this year’s show.

The first lineup has been confirmed for 2019 SOBA!

On July 31, it was revealed that TWICE, Chungha, Park Ji Hoon, Kim Jae Hwan, and Ha Sung Woon will be attending this year’s ceremony.

Jun Hyun Moo and So Yi Hyun will be MCs for the first day, while the second day will be hosted by Yoon Do Hyun, Jin Ki Joo, and Jung Yi Na. A star-studded lineup of presenters was also announced previously.

Stay tuned for the next lineup of artists for 2019 SOBA!