It was almost the end of the evening, and Stray Kids was preparing to wrap up an electrifying concert at New York City’s Madison Square Garden—the first stop of their ambitious “District 9: Unlock” world tour, which will take them to eight cities across the United States before heading to Asia and Europe this spring.

Throughout the night, which was packed with high-energy performances and jaw-dropping displays of talent, the entire venue was on their feet passionately singing and dancing along to the group’s songs—and it wasn’t until Stray Kids was starting to say their goodbyes that Bang Chan suddenly noticed that all that standing had been entirely voluntary.

Bursting into laughter, he asked the audience, “You guys have been standing up the whole time! You guys aren’t tired? You guys are okay?”

As far as we could tell, they were more than okay. Based on the cheers of the crowd and the fervor with which they were jamming to the music, it seemed pretty clear that the audience was having the time of their lives. Even for K-pop concertgoers—who are often extremely familiar with Korean lyrics and able to sing along with ease—the crowd at Stray Kids’ New York concert was particularly impressive in just how ardently they sang along to almost all of the group’s lyrics in perfect unison.

That passion wasn’t lost on Stray Kids, who expressed their amazement more than once at just how well the audience knew their lyrics. At one amusing point in the night, the group paused for dramatic effect in the middle of an emotional ballad remix of “I am YOU“—and instead of waiting for the idols to continue singing, the crowd took the initiative to begin singing the chorus at full volume on their own, making the Stray Kids members laugh when Bang Chan finally had to jump back in.

But as spirited and full of life as the crowd was, all of that energy was being reflected right back at them by the Stray Kids members, who themselves appeared to be enjoying the night to the absolute fullest on stage. 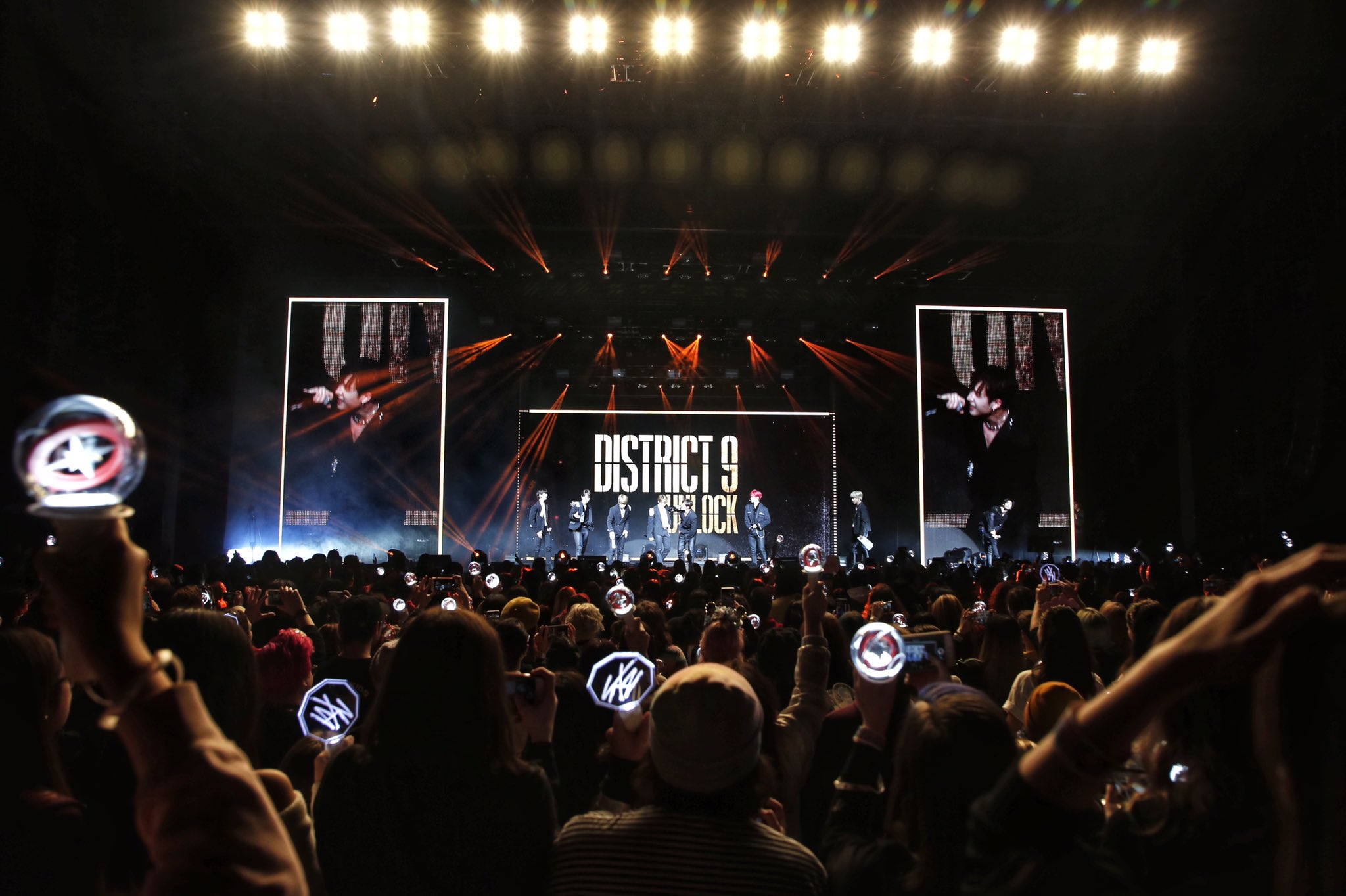 The perfectly synchronized intricacies of K-pop choreography, as impressive as they are, can sometimes make it difficult for idols’ spontaneity to shine through during their performances. But Stray Kids never hesitated to joke around with each other or let their personalities shine through during the middle of a song, and when they weren’t busy wowing the crowd with their flawlessly-executed choreography, they were often eager to make each other—and their fans—laugh with their spontaneous, playful antics.

The group also added something special to the show by finding ways to work new elements into their routines at every opportunity: whether it was a haunting remix of their pre-debut track “Hellevator,” a powerful choreographed intro to “MIROH,” or a too-cute-for-words dance break in the middle of “My Pace,” there were plenty of surprises in store, even for fans who are already intimately acquainted with Stray Kids’ repertoire.

Although “District 9: Unlock” marks Stray Kids’ first official world concert tour, the group has performed in the New York area before; most recently, the group stopped by Newark last May during their “Unveil Tour ‘I am…'” showcase tour. And if that show proved the idols to be talented, promising performers who were ready to make their mark on K-pop history, their concert at Madison Square Garden established beyond a doubt that they are no longer rookies who are still finding their feet. Less than two years after their official debut, Stray Kids already gives off the air of experienced idols who are confident that they know how to own the stage.

Changbin kicked off the night by rapping a fierce solo opening to the group’s debut single “District 9,” the song that gave their tour its name. And as the other Stray Kids members individually sauntered towards the center of the stage to begin the song, the subtle changes they had made to the track already highlighted just how much the members had grown and matured since they first stormed onto the scene with “District 9” in March 2018. There was something relaxed and self-assured about their manner, even as they maintained the explosive energy that defines the track. 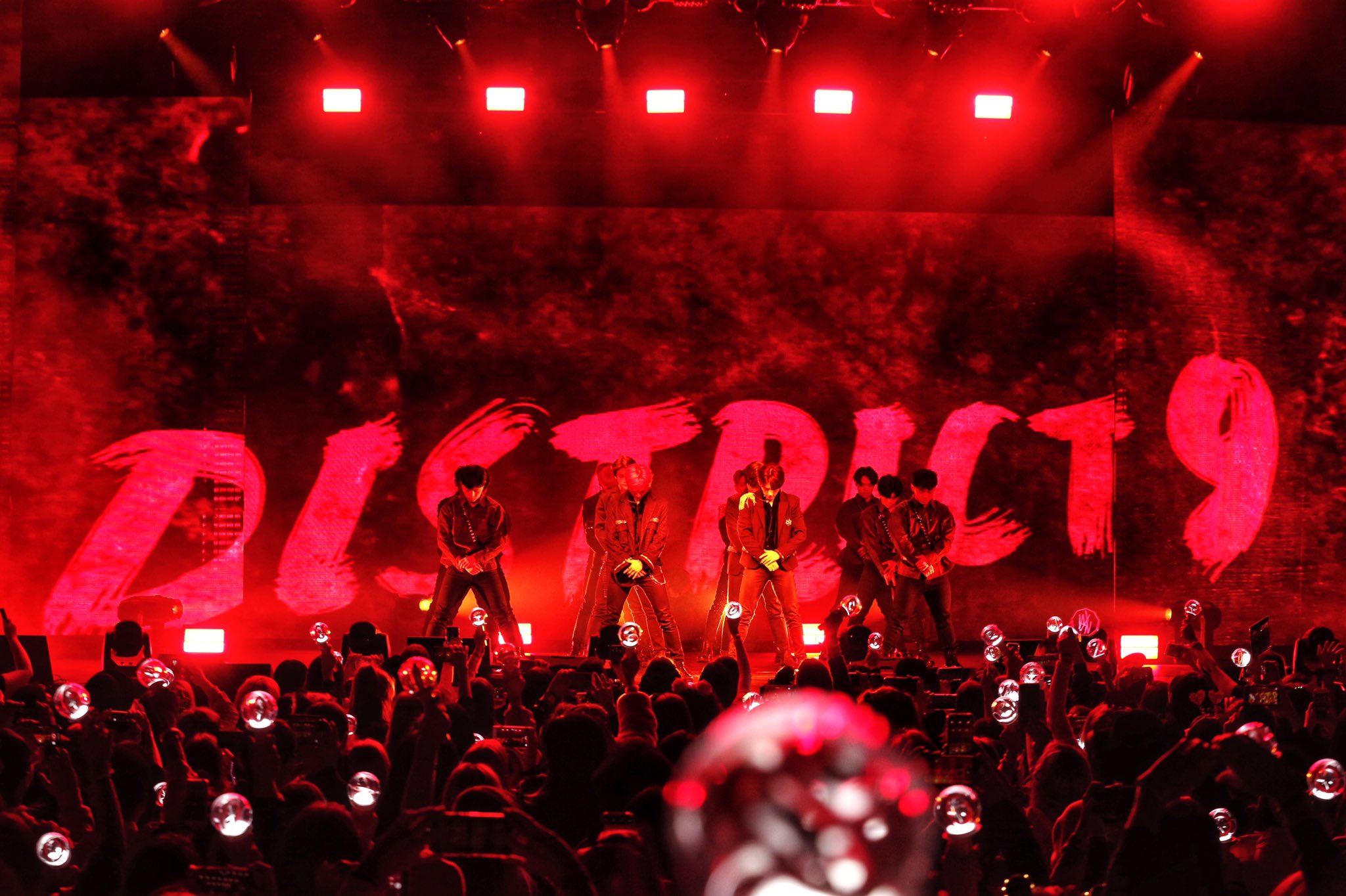 This easy confidence especially shone through during their unit stages, in which Stray Kids split up into three groups to perform unreleased songs that showcased their strengths and expertise. The dance line—Lee Know, Hyunjin, and Felix—thrilled the crowd and showed off their sexy side with a fiery performance of “Wow,” while vocalists I.N and Seungmin serenaded the audience with a sweet rendition of “My Universe.” Finally, 3RACHA—consisting of rappers Han, Changbin, and Bang Chan—tore up the stage with a performance of “We Go” that somehow managed to be both playful and feral at the same time.

Felix specifically mentioned this visible growth later on in the night, when he asked his bandmates, “When was our last performance [here]? Seven, eight months ago? That’s a long time. Coming back here to perform for our first world tour ‘Unlock’ here in New York honestly makes me feel that time has passed by so fast.”

“And not only that,” he went on, “but from the start, from our trainee days until now, STAY [Stray Kids’ official fandom] has always supported us. Whenever we needed you guys, you guys would always support us and give us love. You guys would always cherish us, and we cherish you guys the same way. And honestly, to feel that love for one another…” He then broke off to laugh at himself, joking, “This sounds very cheesy.”

As the crowd encouraged him with their cheers, he continued, “To express love for one another [like this], honestly, it gets me in the feels. And I really want to do so much more for you guys. Coming here, I feel so glad, and I’m so happy to be here. It’s so good to show that we’ve grown up, that we’ve accomplished many things over the past years and until now. You guys are always growing with us and having to see that process… and seeing you guys come with us and running together to the goal we want… honestly, you guys are the reason why we’re still Stray Kids, and you guys are the reason why we’re still here. So I just want to say thank you so much… I really believe in STAY.” 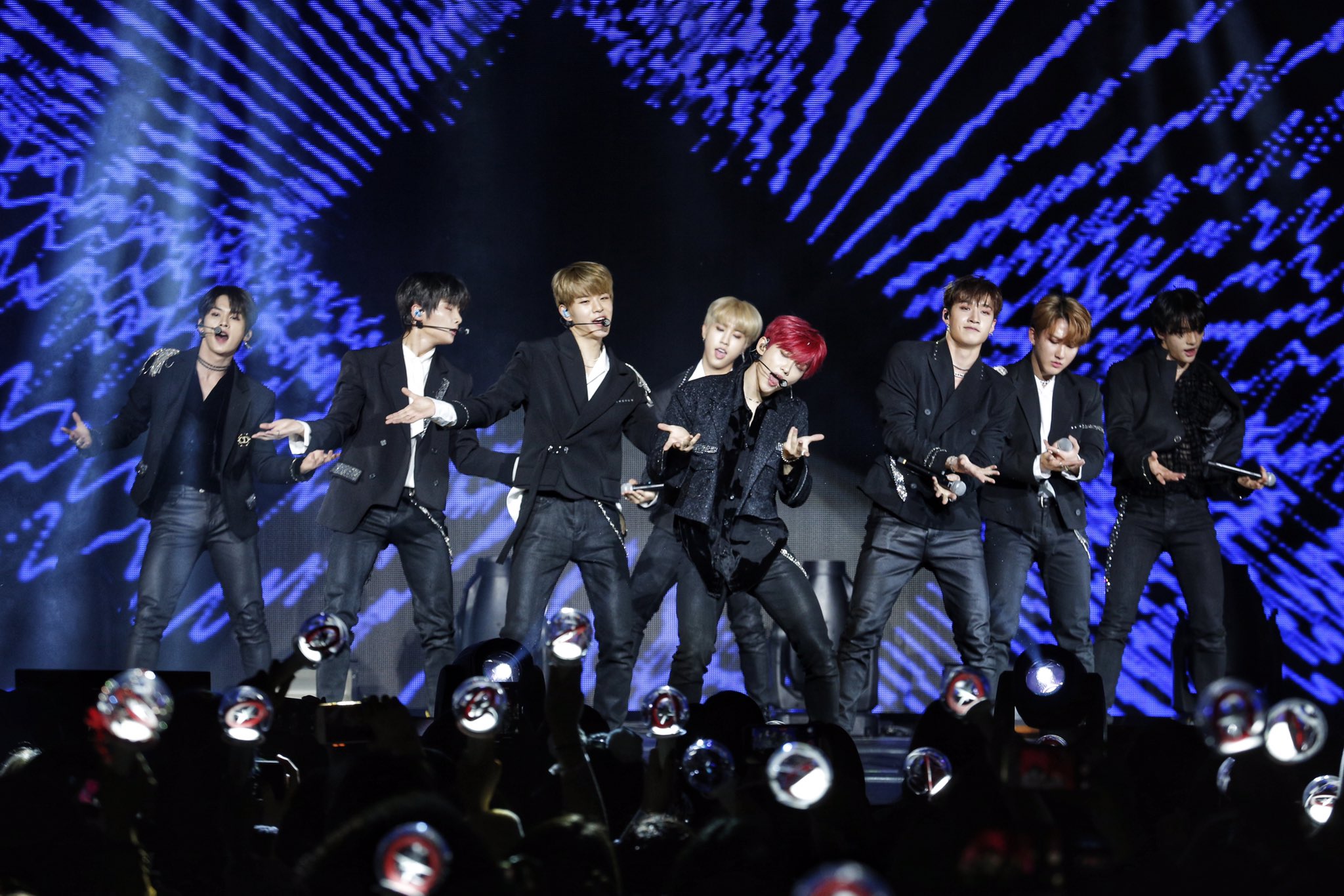 The Stray Kids leader was echoing a sentiment expressed poetically earlier in the concert, during a special introduction to their latest title track “Levanter.” A moving narration read by Felix—and also displayed on the screen for all to see—declared, “Stray Kids is not the only one who got lost; those who got lost could be anywhere. All strayed steps come together to make a new road, and Stray Kids will be with each and every step… You and I, we all make stray kids stay. Not just ‘Stray Kids,’ but stray kids everywhere all around the world.”

"Stray Kids is not the only one who got lost; those who got lost could be anywhere. All strayed steps come together to make a new road and Stray Kids will be with each and every step"#SKZUNLOCKinNYC pic.twitter.com/wekhU0Utnx

In a way, it makes perfect sense that Stray Kids’ fans were so connected to the music that they became part of the show itself. Not only are the group’s songs and lyrics relatable and inspiring, but the members themselves encourage their fans to find comfort and strength in joining the “Stray Kids family,” where even the lost are found.

As the idols prepared to say their goodbyes, Bang Chan told the crowd, “I promise that—not just me, but Stray Kids—we’ll be responsible for our beautiful STAY, and we promise to always try our best and always improve. And we’ll give you guys the best 2020 ever. Promise! It’s because of you guys [that] we want to do more, because it feels like STAY is part of our family… we’re all one big family.”

It was a promise he repeated fervently at the very end of the night. “2020 will be a fantastic year!” said the idol, as he smiled confidently out at the cheering crowd. “We promise to always improve, and we’ll make you guys have the time of your lives, and that’s a promise, okay?”

One thing’s for certain: if their New York concert is anything to go by, Stray Kids is already succeeding in keeping that promise. 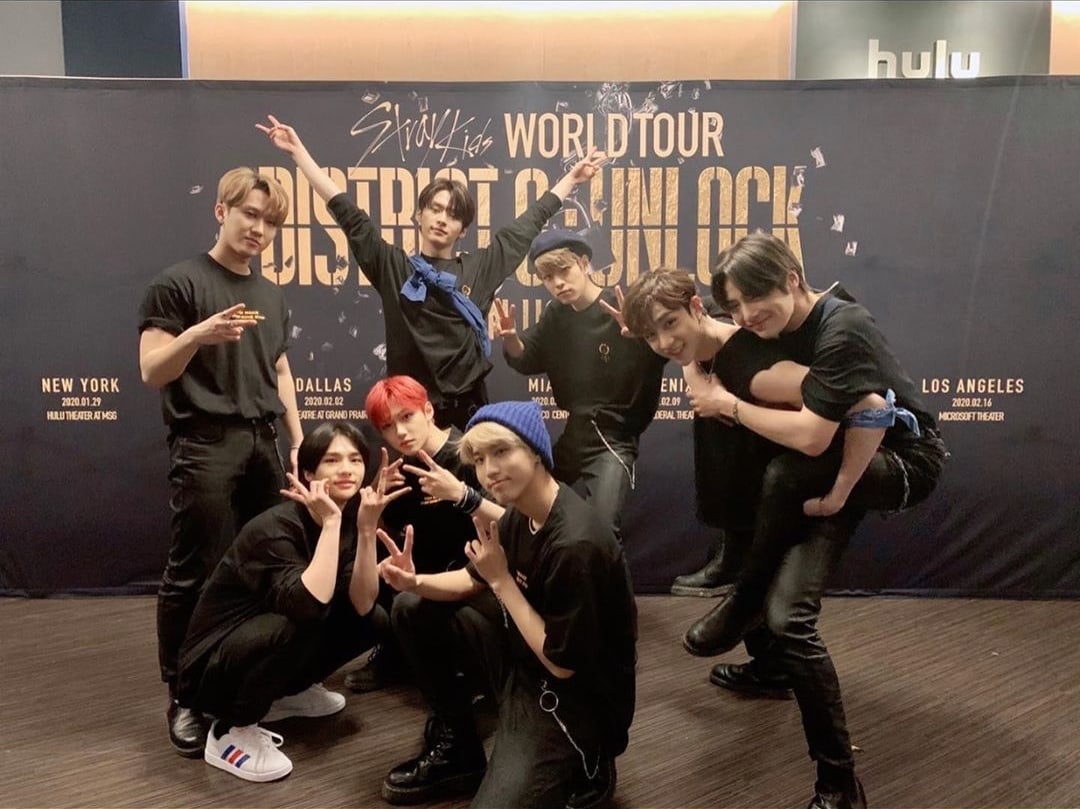 For a chance to win tickets to one of Stray Kids’ remaining concerts in the U.S., enter Soompi’s giveaway here!

Stray Kids
Soompi Spotlight
Soompi Exclusive
How does this article make you feel?