Watch: “I-LAND” Premieres With Trainees Covering EXO, NCT, And More For Test As They Aim For Spots In New Group

Mnet’s newest survival show “I-LAND” has kicked off the competition!

On June 26, Mnet’s “I-LAND” began telling its story of the 23 contestants aiming to debut in a new boy group. The “observation reality show” is the first project from BELIF+, a joint venture between CJ ENM and Big Hit Entertainment.

Actor Namgoong Min was first introduced as the show’s storyteller and he later introduced Bang Si Hyuk as the general producer with Rain and Zico also as producers.

The three producers met up in the “producing room” where Rain happily greeted Bang Si Hyuk. He shared, “When I was in grade 11, I auditioned for you. Whenever you made songs, I would sing the demos. But did you know this? That you were really scary back then?” Rain added, “I got scolded so often back then.” 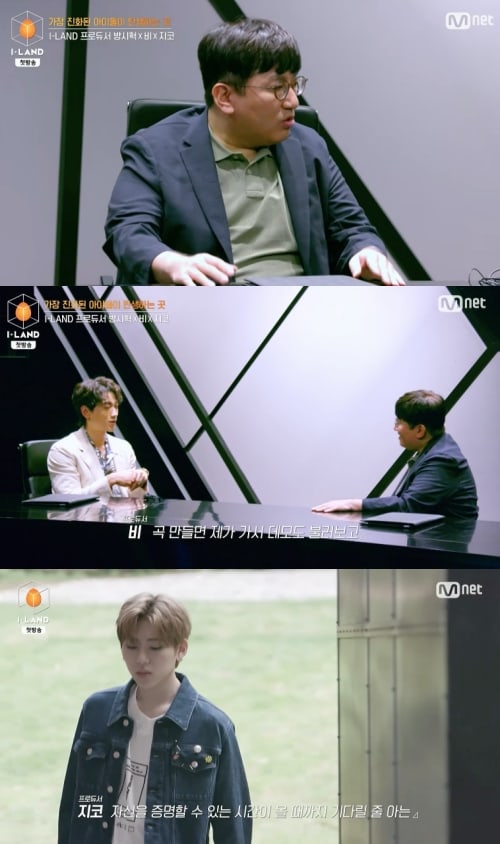 Bang Si Hyuk responded, “From my perspective, after your promotions for ‘How to Avoid the Sun,’ you were already such a global star and someone I really respected. I don’t know if you remember but once you said, ‘I think I sing way better after I run. I’m going to go run for a bit.’ You came back dripping in sweat and began to sing. I thought that you would become a model example.”

The producers later explored the unique training center made specifically for “I-LAND” and expressed amazement at its strategic design. Rain commented, “If you put it in terms of a movie, this is a blockbuster. I feel like I’m on the set of a movie.” Zico added, “I was so shocked when I first came in. It’s a place where you can’t not properly practice. Doesn’t it feel like it’s been made for you to invest 100 percent of your time in?”

Before introducing the trainees, Bang Si Hyuk shared, “23 applicants who have proven their potential are coming to ‘I-LAND.’ Their potential to develop is more important than their current skills.”

Many of the trainees then began entering in units. The first unit introduced Kim Sunoo, Lee Youngbin, and Jake. The next unit featured multinational trainees Hanbin, Ni-ki, and Nicholas. Songwriters and composers made up the next unit with Jimin and Sungchul. The last unit featured EJ and the youngest contestant Daniel.

Trainee Lee Heeseung gained a lot of attention for having had the longest training period at Big Hit Entertainment. He’s been training for three years and one month and was originally in the lineup to debut with TXT. Heeseung commented on the group, sharing, “They’re friends I trained with for a long time. I was supposed to congratulate them on their debut but it was hard for me. I’m going to put everything I have into ‘I-LAND.'” Bang Si Hyuk praised him by saying, “You can look forward to both his singing and dancing.”

Another trainee who garnered a lot of buzz was Sunghoon, who spent 11 years as a figure skater. He shared, “I’ve been a figure skater since I was 9 years old and I won many awards at international competitions. The more I prepared to become an idol, the more interest I gained in this field and my debut.” 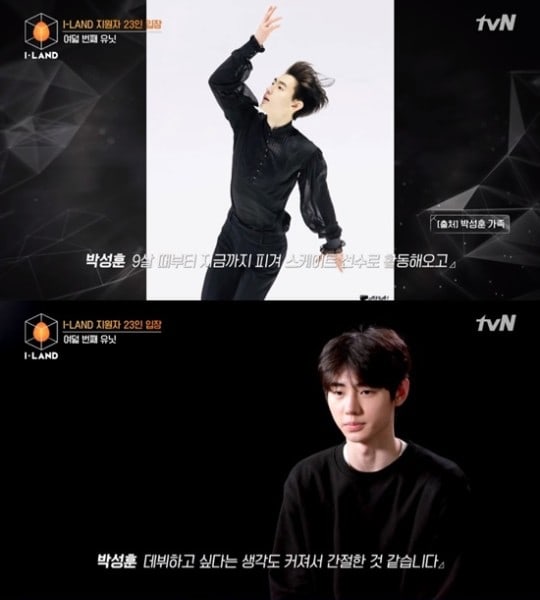 However, Sunghoon is not the only trainee with an athletic background. Youngbin played basketball, EJ was a fencer, Jungwon was a taekwondo athlete, and K was a marathon runner. Rain jokingly asked, “Did you pick them like this on purpose?” Bang Si Hyuk hilariously responded, “I’m surprised looking at this too.”

While there was a total of 23 applicants, only 12 would be able to make it through the “I-LAND” gates, so they began an entrance test where the trainees evaluated one another. First up was Seon who powerfully performed GOT7‘s “Lullaby,” but he was told by Rain that his performance was regretful. The voting was done with a simple hand vote on the spot and Seon was eventually able to enter the I-LAND with 22 votes.

Before Lee Heeseung’s performance, Kyungmin commented, “Heeseung is definitely first place for ‘I-LAND.'” In fitting with his long training period and his reputation for always placing first as a trainee, Lee Heeseung showcased his talent with a performance of NCT U‘s “BOSS,” also earning a pass to enter the I-LAND.

Afterwards, Jay and Sunghoon also took on an NCT U song with their cover of “The 7th Sense,” successfully entering I-LAND.

The first trainee to be “eliminated” was Hanbin, following his performance of “Jopping” by SuperM with Ni-ki and Nicholas.

From the performances of VIXX‘s “Chained Up” and Jay Park‘s “All I Wanna Do,” Kyungmin and Yoonwon were eliminated.

Ta-ki took the final remaining spot with an impressive 22 votes for his performance of “Monster” by EXO.

Watch the remaining performances below!

However, despite already having 12 trainees enter I-LAND, the final group to perform also earned passes. This put the final count at 16 trainees who had passed and 7 who had been eliminated.

The 16 trainees to make it into I-LAND were Geonu, Ni-ki, Nicholas, Jungwon, Jake, Sungchul, K, Sunoo, Youngbin, EJ, Daniel, Seon, Heeseung, Jay, Sunghoon, and Ta-ki. The boys bid farewell to the eliminated trainees and made their way through the gates to the I-LAND. Amazed at the structure, Daniel commented, “It was like a hero’s home base.” 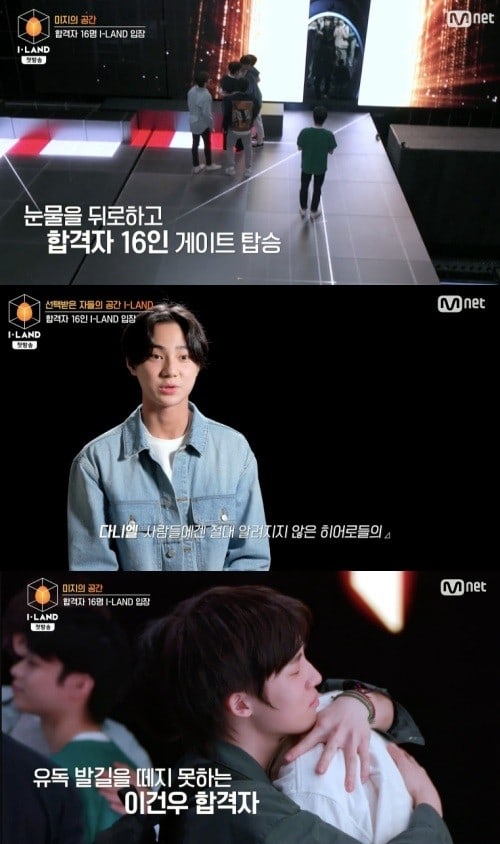 However, everything within I-LAND — including its recording studio, fitness center, individual practice rooms, group practice room, residence, item room, medical office, terrace, and more — was only made to accommodate 12 people.

To determine the final 12 trainees, they began one last vote. Those who did not make it into the final 12 would have to go to the “ground” and join the seven eliminated trainees. The trainees expressed disappointment that there was likely no chance of debuting if they were on the “ground” as Jaebeom confessed, “I’m scared that I’ll just keep practicing there and then this game of survival will end.”

The final vote was held among the 16 trainees to determine which four would be sent to the “ground.” Namgoong Min reminded them, “This is selecting the team that you desire. All of I-LAND’s decisions are made by the applicants themselves.”

The vote continued to showcase the intensity of the program and the competitiveness between the trainees, shocking viewers at the end when it seemed that Ni-ki had voted off his close friend Ta-ki.

This week’s full episode of “I-LAND” will soon be available on Viki. Watch a teaser below!