NCT’s second album as a full group, “RESONANCE Pt. 1,” topped the physical album chart for the month of October. BLACKPINK’s first full-length album “THE ALBUM” came in at No. 2, followed by SEVENTEEN’s special album “; [Semicolon]” at No. 3. BTS’s “Special Addition” reissue of their 2014 mini album “Skool Luv Affair” charted at No. 4, and SuperM’s first full-length album “Super One” rounded out the top five for the month. 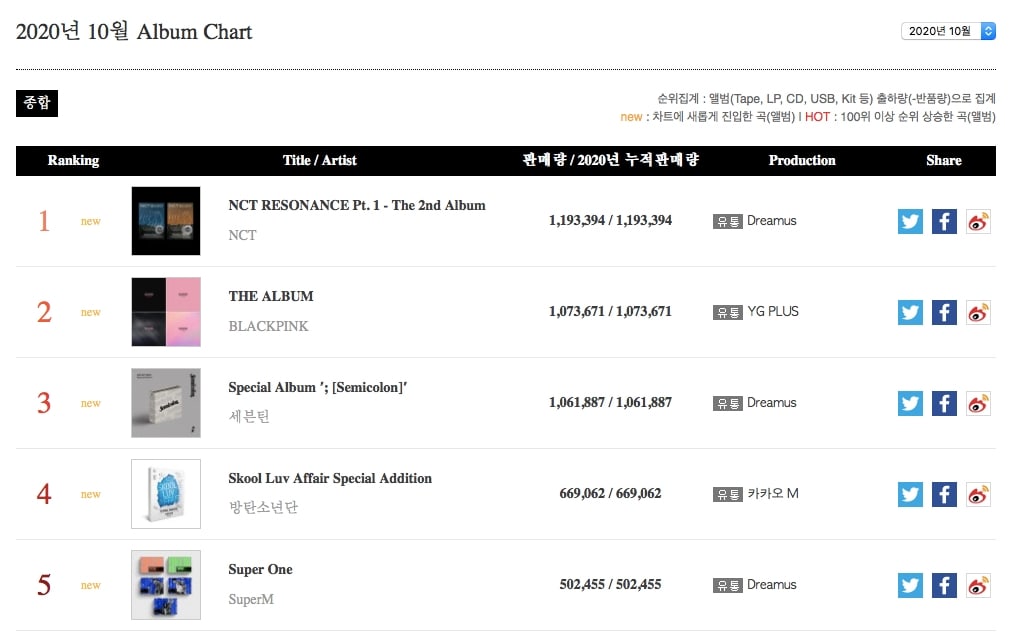 MONSTA X’s new album “Fatal Love” debuted at No. 1 on the physical album chart for the week of November 1 to November 7. MAMAMOO’s new mini album “TRAVEL” entered the chart at No. 2, while BLACKPINK’s “THE ALBUM” climbed back up the chart to No. 3. Finally, WINNER’s Song Mino’s new solo album “TAKE” and AB6IX’s new mini album “SALUTE” debuted at No. 4 and No. 5 respectively. 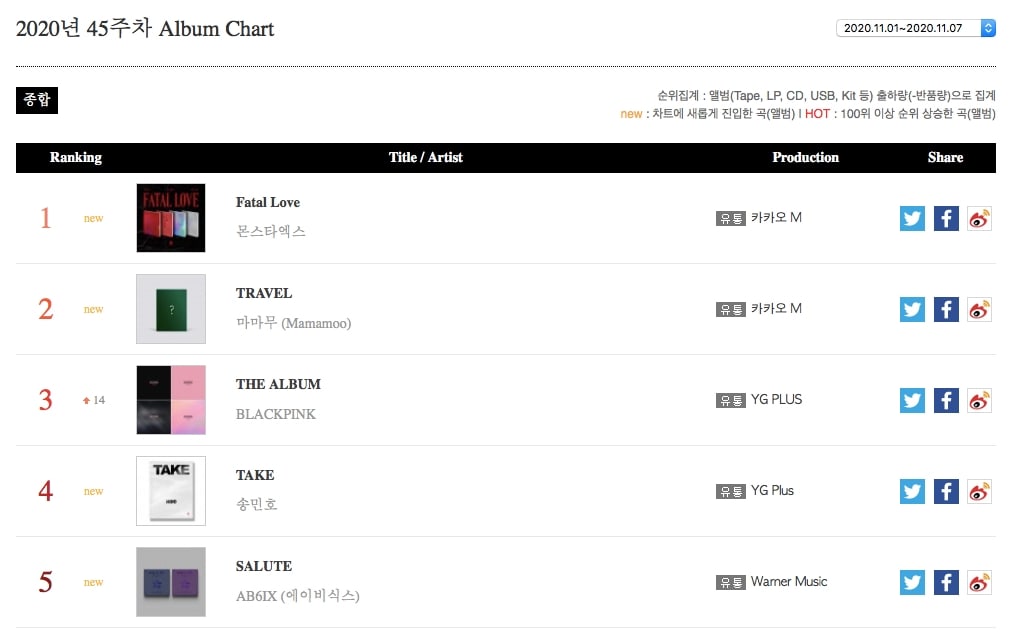 BTS maintained their double crown on the monthly charts for October, topping both the overall digital chart and the streaming chart for the second consecutive month with their smash hit “Dynamite.”

“How Do You Play?” project group Refund Sisters’ debut track “Don’t Touch Me” came in at No. 2 on the overall digital chart for October, followed by BLACKPINK’s “Lovesick Girls” at No. 3. B1A4’s Sandeul’s “Slightly Tipsy” stayed strong at No. 4, while Park Jin Young and Sunmi’s duet “When We Disco” charted at No. 5. 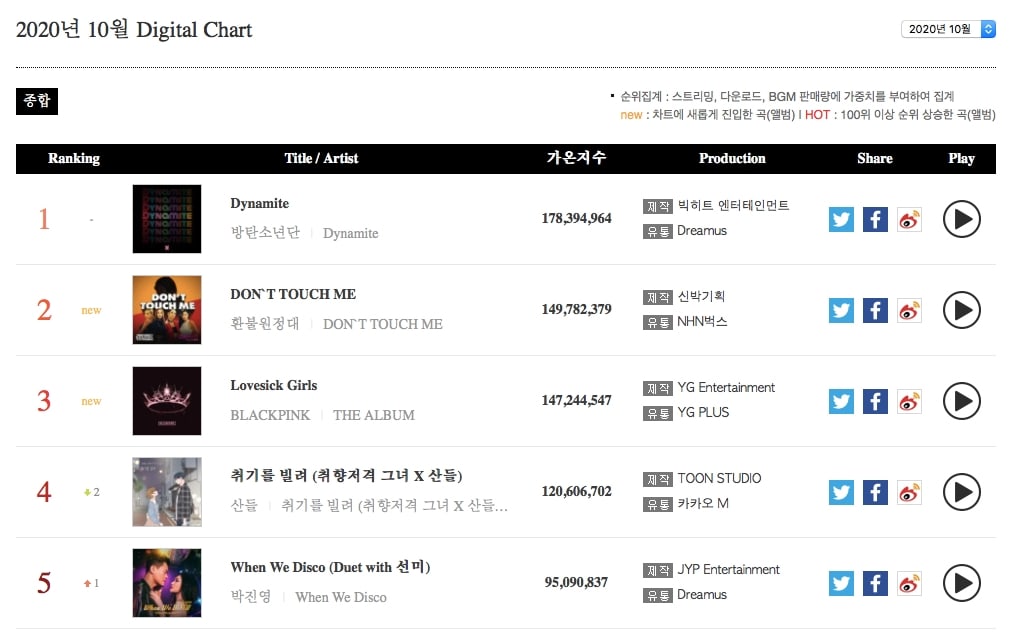 BTS also held onto their double crown on the latest weekly charts, where “Dynamite” topped both the overall digital chart and the streaming chart.

The top five songs on the overall digital chart and the streaming chart were exactly the same this week: BTS’s “Dynamite” remained No. 1, with BLACKPINK’s “Lovesick Girls” at No. 2, Im Chang Jung’s “Love Should Not Be Harsh on You” at No. 3, Refund Sisters’ “Don’t Touch Me” at No. 4, and B1A4’s Sandeul’s “Slightly Tipsy” at No. 5. 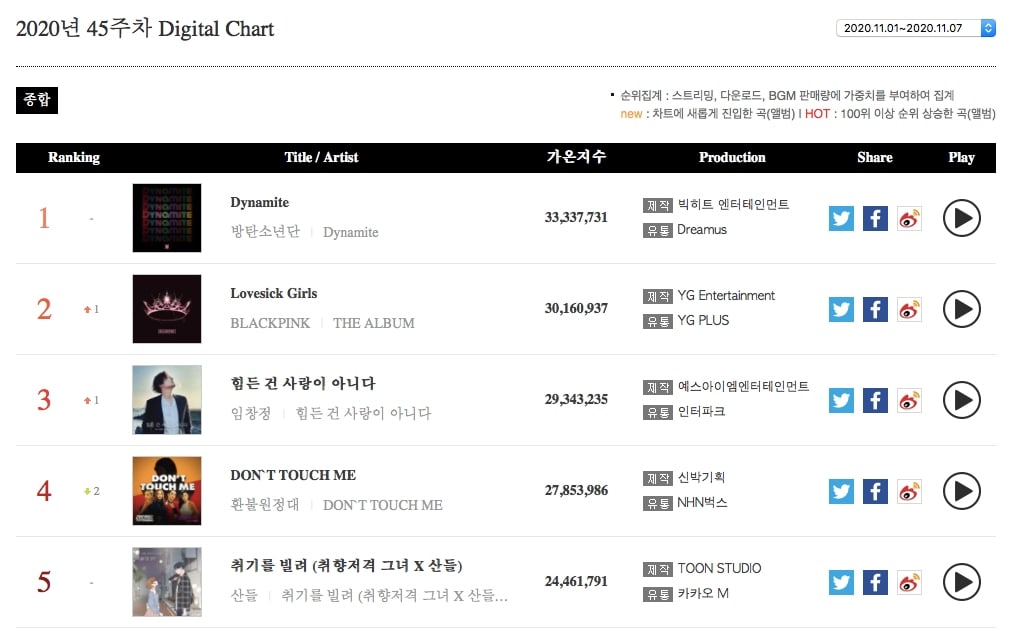 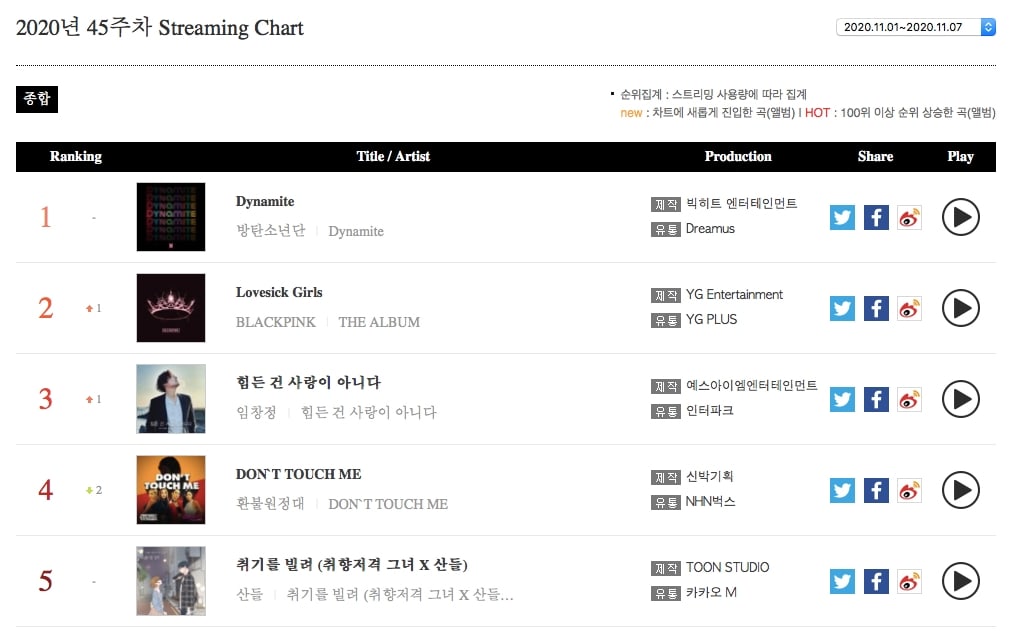 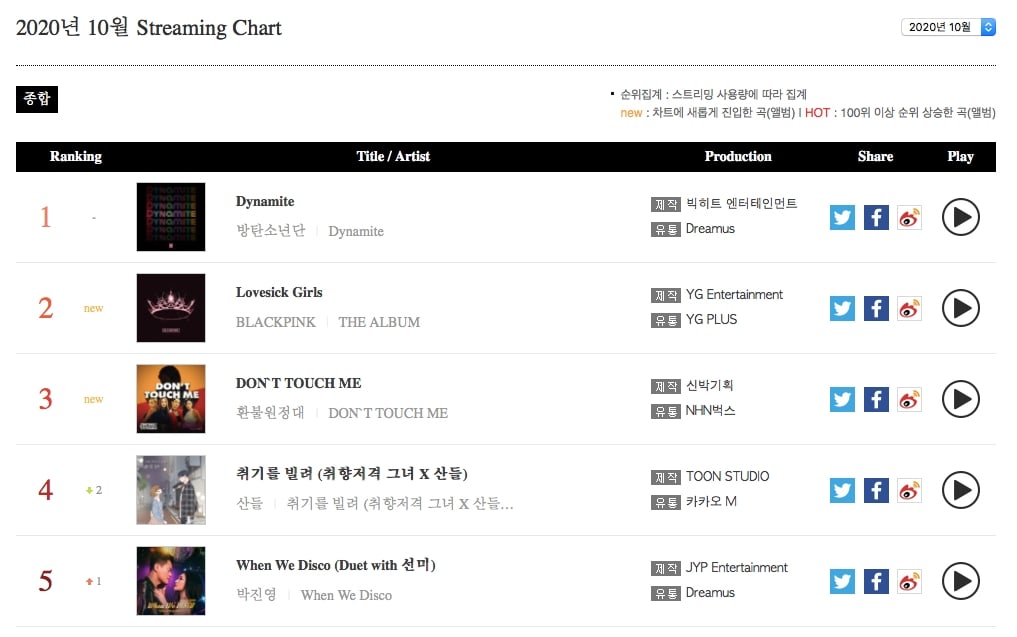 Refund Sisters’ “Don’t Touch Me” topped the digital download chart for October, trailed by BLACKPINK’s “Lovesick Girls” at No. 2 and BTS’s “Dynamite” at No. 3. NCT U’s “Make A Wish (Birthday Song)” came in at No. 4, and BTS’s remix of Jawsh 685 and Jason Derulo’s “Savage Love” rounded out the top five for the month. 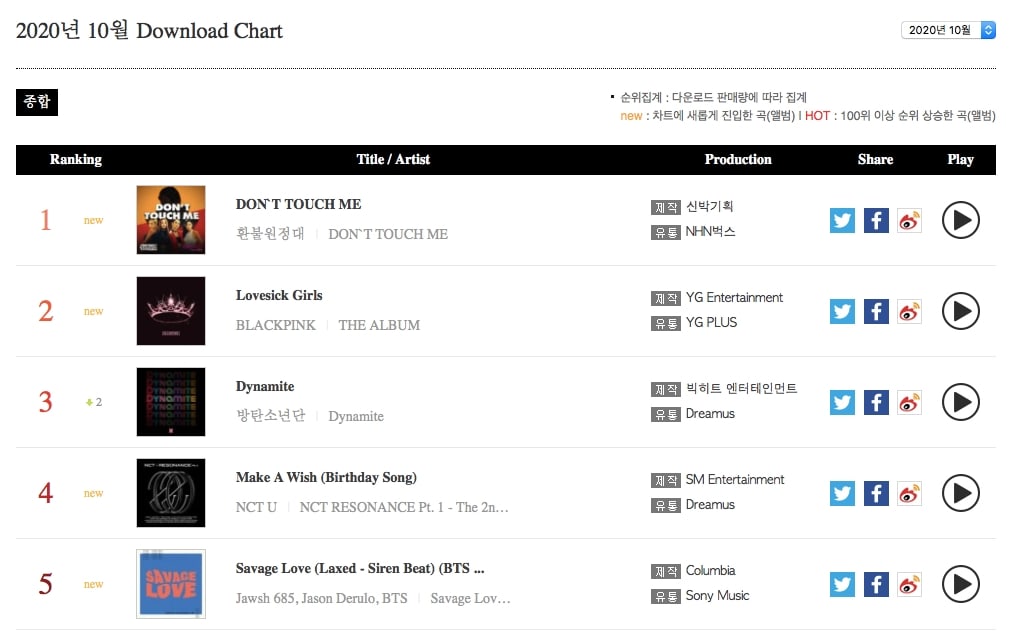 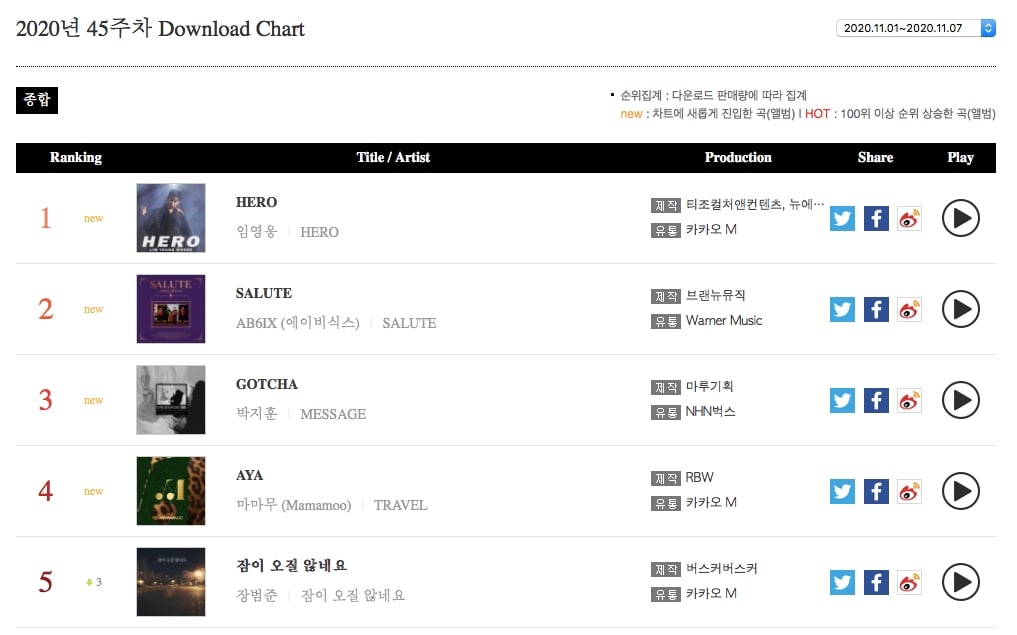 BLACKPINK continued their reign at No. 1 on Gaon’s Social Chart 2.0 for the sixth consecutive month, while Im Young Woong similarly held onto his spot at No. 2. Refund Sisters came in at No. 3 for October, followed by BTS at No. 4 and Yang Joon Il at No. 5. 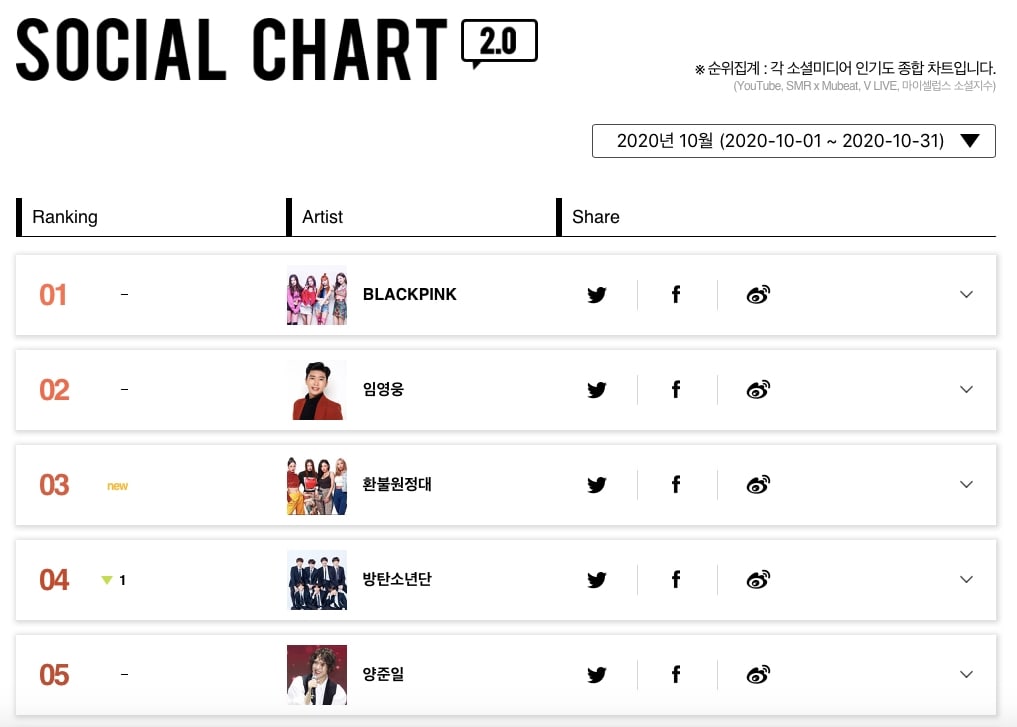 BLACKPINK also defended their position at No. 1 on Gaon’s weekly Social Chart 2.0 for the 24th consecutive week. The top five remained exactly the same as last week, with Im Young Woong at No. 2, BTS at No. 3, Yang Joon Il at No. 4, and TWICE at No. 5. 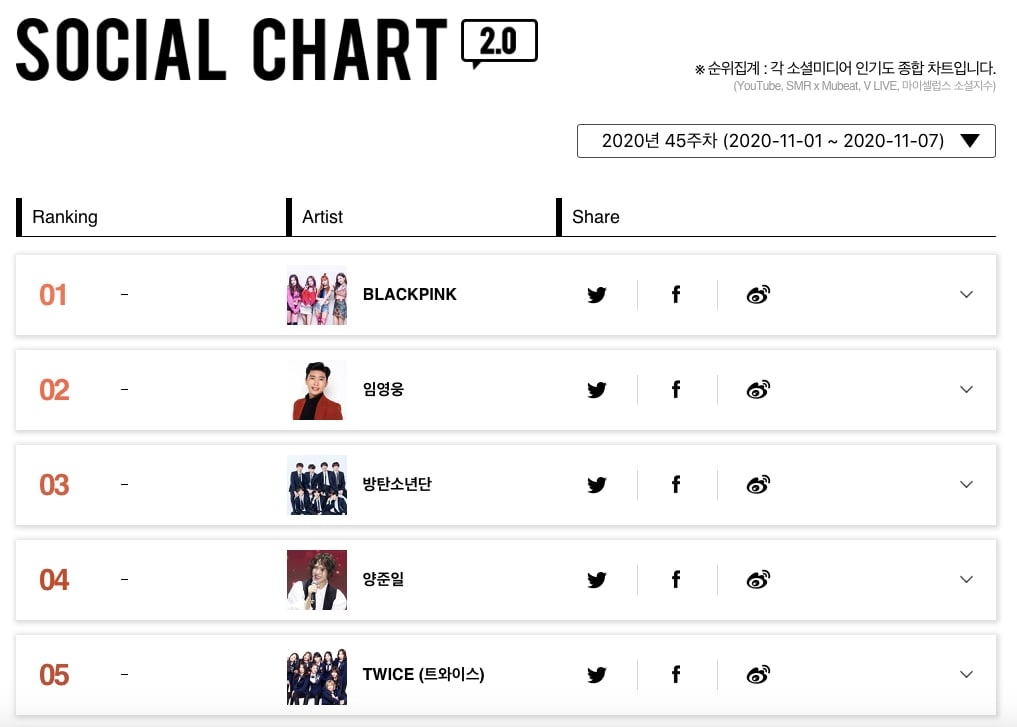