Gaon has released its weekly chart rankings for the week of January 2 to January 8. 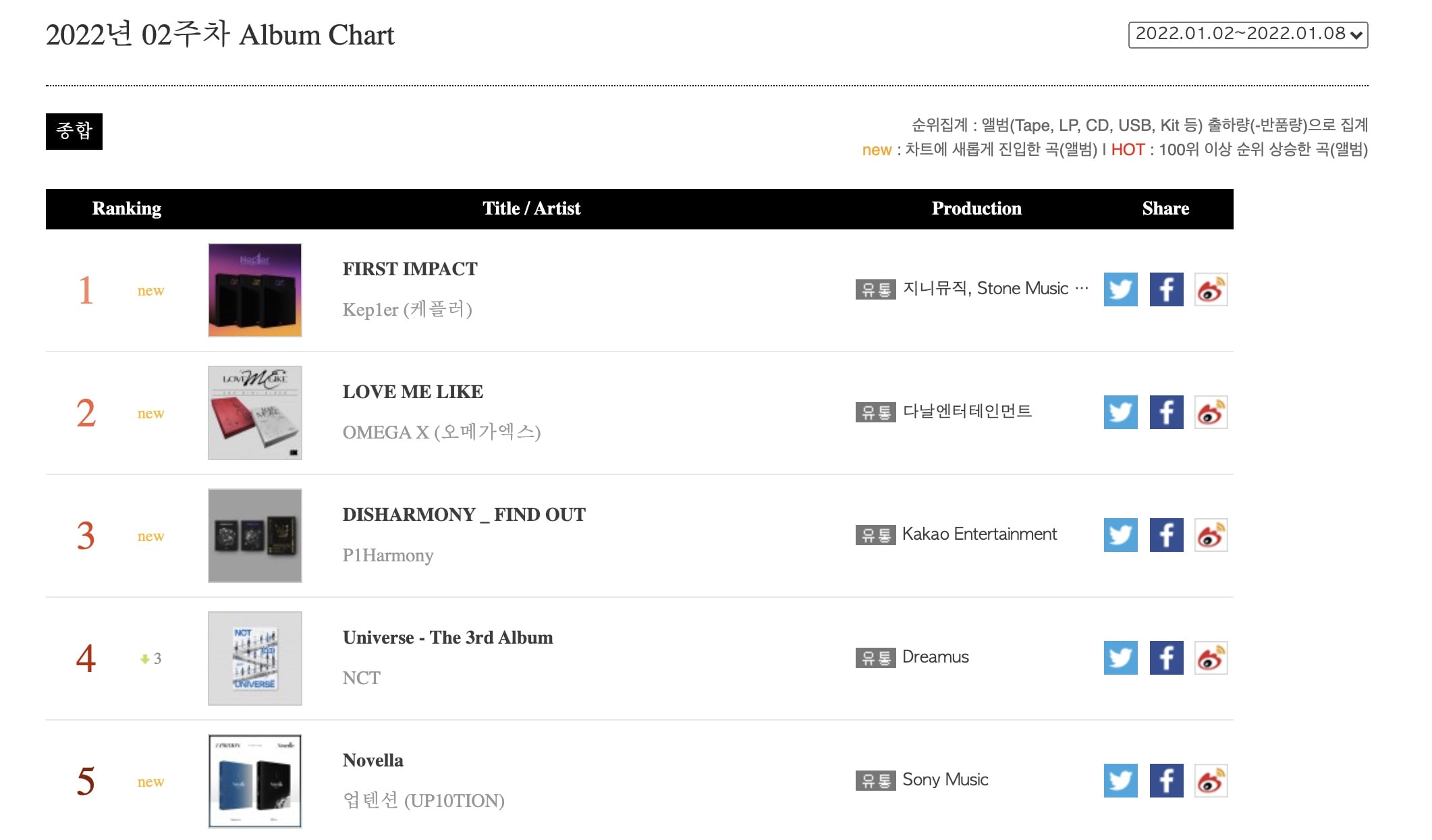 With the exception of NCT’s “Universe,” the top five on the album chart for the week of January 2 to 8 were new entries. Kep1er made their debut at No. 1 on the chart with their first EP, “FIRST IMPACT,” taking the coveted top spot. It was followed by OMEGA X’s new album “Love Me Like” and P1Harmony’s “Disharmony: Find Out.” NCT’s “Universe” dropped a few places to rank No. 4, while UP10TION’s “Novella” came in at No. 5. 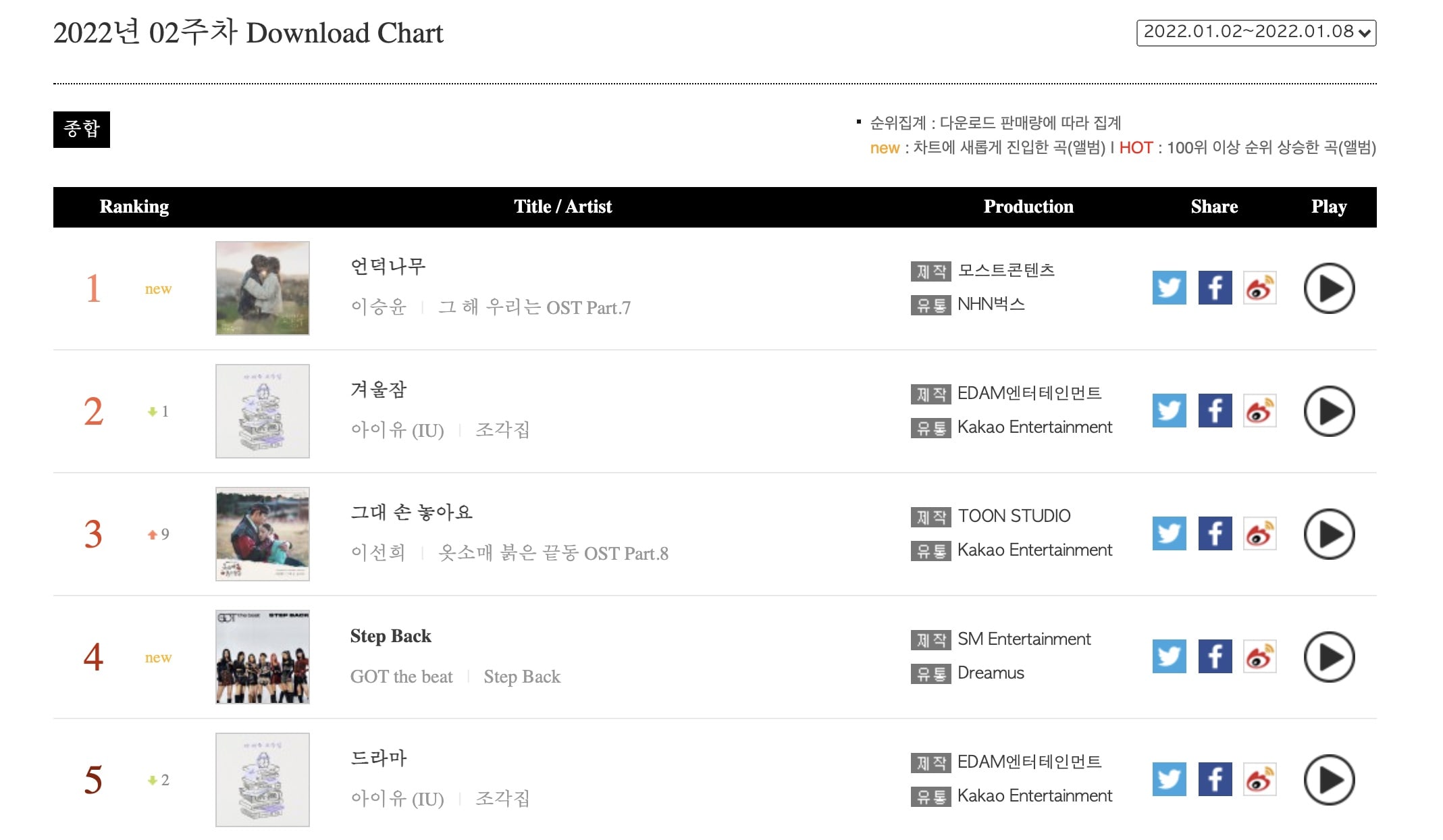 The download chart for the week for January 2 to 8 features two drama OSTs (original soundtracks). Taking the top spot was Lee Seung Yoon’s “The Giving Tree” from SBS’s “Our Beloved Summer,” starring Choi Woo Shik and Kim Da Mi. IU’s “Winter Sleep” followed at No. 2. Another OST came in at No. 3: Lee Sun Hee’s “I’ll Leave You” from the hit drama “The Red Sleeve,” starring Lee Junho and Lee Se Young. “Step Back,” from SM Entertainment’s new project girl group GOT the beat, with BoA and members of Girls’ Generation, Red Velvet, and aespa, ranked No. 4. IU’s “Drama” rounded out the top five. 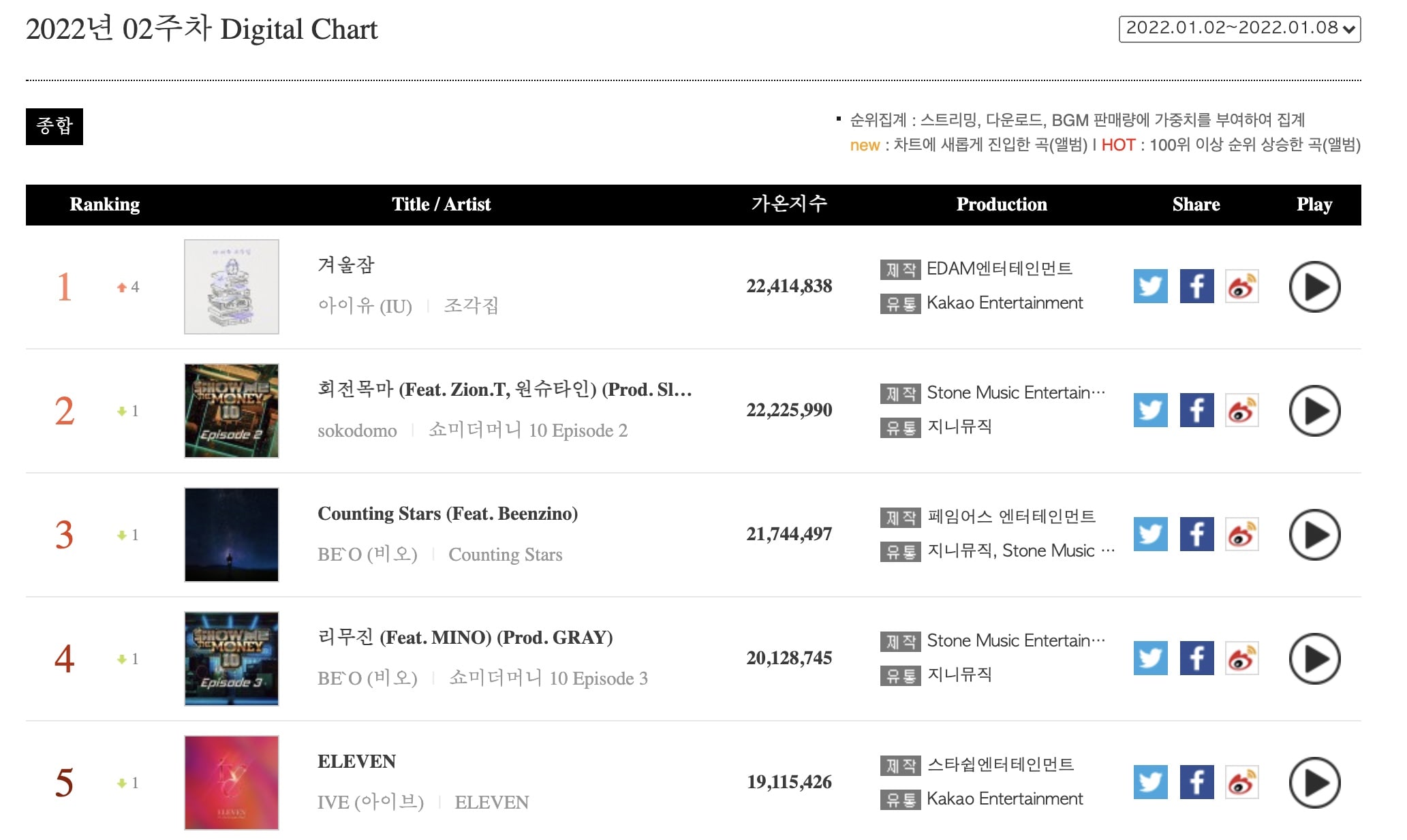 IU’s “Winter Sleep” rose up the top five rankings to take the No. 1 spot for this week’s digital chart. The other entries all dropped one ranking but otherwise remained similar to last week‘s chart: sokodomo’s “Merry-Go-Round” (featuring Zion.T and Wonstein and produced by Slom) from “Show Me the Money 10” at No. 2, BE’O’s “Counting Stars” (featuring Beenzino) at No. 3, BE’O’s “Limousine” (featuring Song Mino and produced by Gray) at No. 4, and IVE’s “ELEVEN” at No. 5. 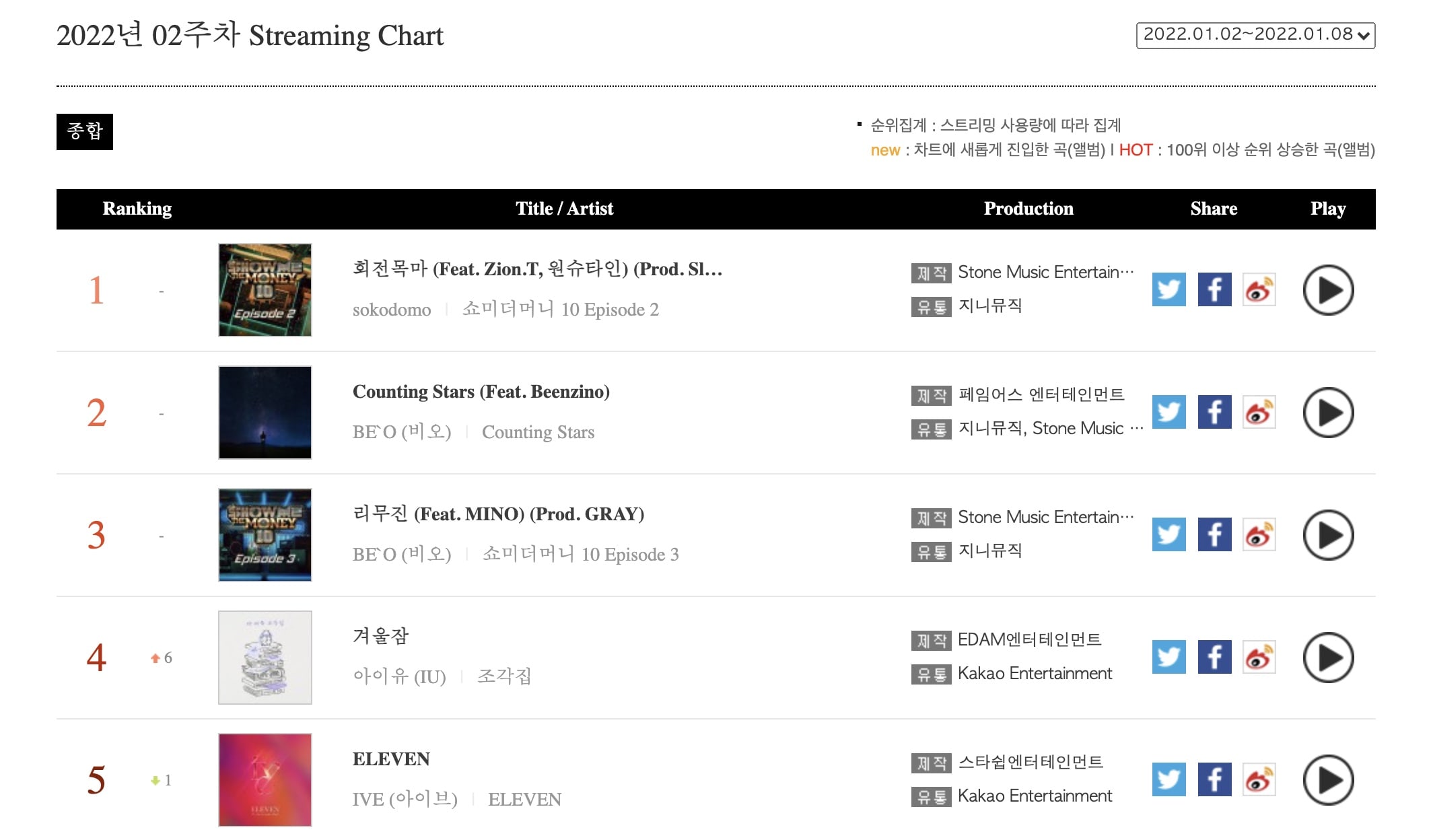 On this week’s streaming chart, “Merry-Go-Round,” “Counting Stars,” and “Limousine” remained in the top three from last week. IU’s “Winter Sleep” rose six places to take No. 4, while IVE’s “ELEVEN” dropped one place to take No. 5. 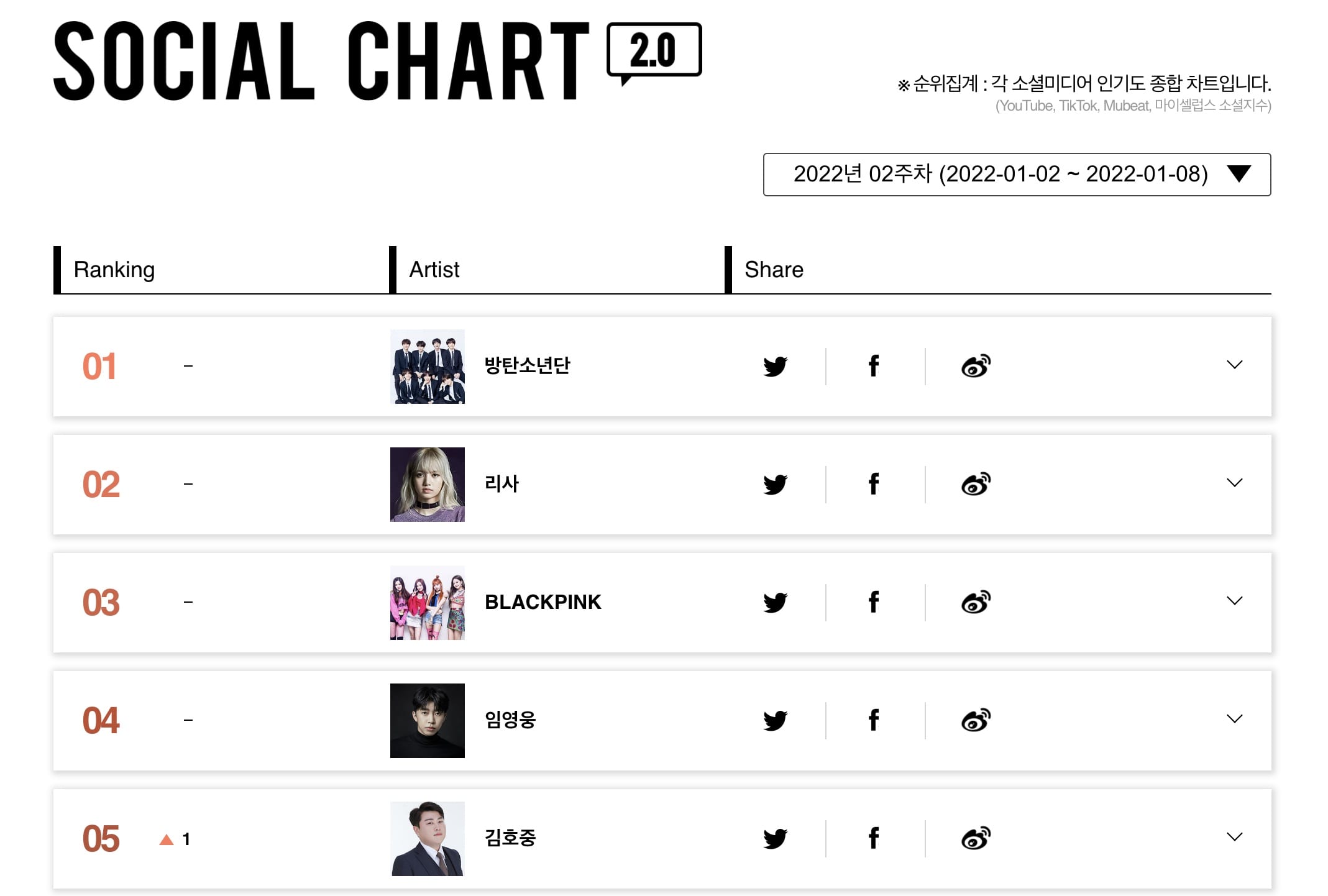 The social chart looks similar to last week except with trot singer Kim Ho Joong rising back up to No. 1. BTS, BLACKPINK’s Lisa, BLACKPINK, and Lim Young Woong continued to rank in the top four.