Gaon Chart has revealed its chart rankings for the week of January 16 to January 22!

NCT’s latest studio album “Universe,” which previously debuted at No. 1 on Gaon’s weekly and monthly album charts, climbed back up to No. 3 this week.

Finally, MAMAMOO’s Wheein and Moonbyul rounded out this week’s top five with their new solo albums. Wheein’s “WHEE” entered the chart at No. 4, followed by Moonbyul’s “6equence” at No. 5. 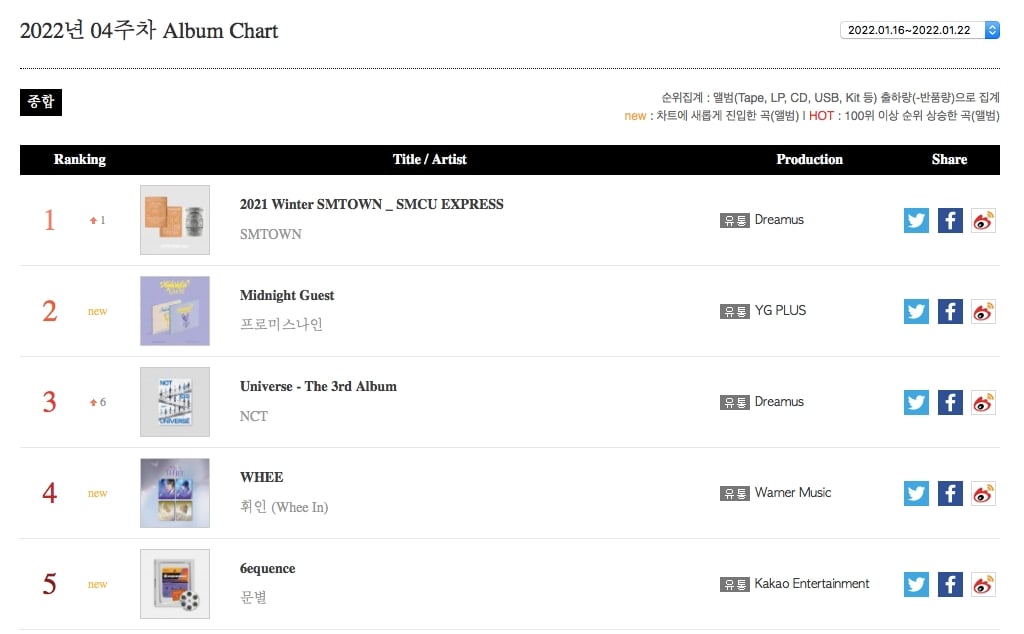 This week’s digital download chart was dominated by new releases. ASTRO’s new unit JinJin&Rocky’s debut track “Just Breath” debuted at No. 1, followed by Girls’ Generation’s Taeyeon’s “Can’t Control Myself” at No. 2, fromis_9’s “DM” at No. 3, GOT7’s BamBam’s “Slow Mo” at No. 4, and Choi Ye Na’s “SMILEY” (featuring BIBI) at No. 5. 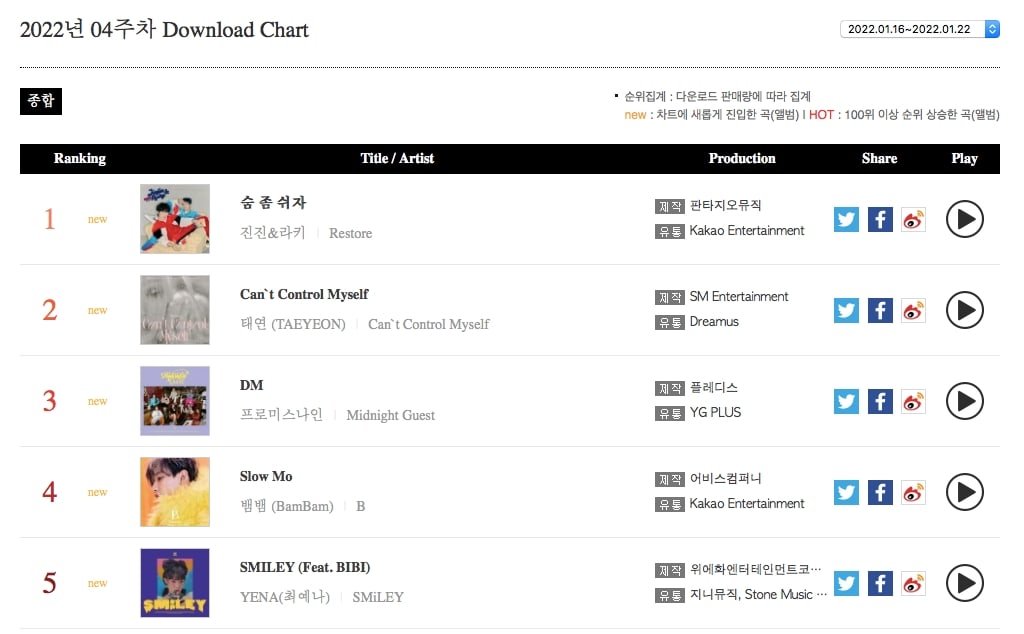 MeloMance’s Kim Min Seok’s “Drunken Confession” topped the overall digital chart for the second consecutive week, while sokodomo’s “Merry-Go-Round” (featuring Zion.T and Wonstein and produced by Slom) held onto its spot at No. 2.

IVE’s debut track “ELEVEN” climbed back up to No. 3 on this week’s chart, followed by IU’s “Winter Sleep” at No. 4 and BE’O’s “Limousine” (featuring WINNER’s Song Mino and produced by Gray) at No. 5. 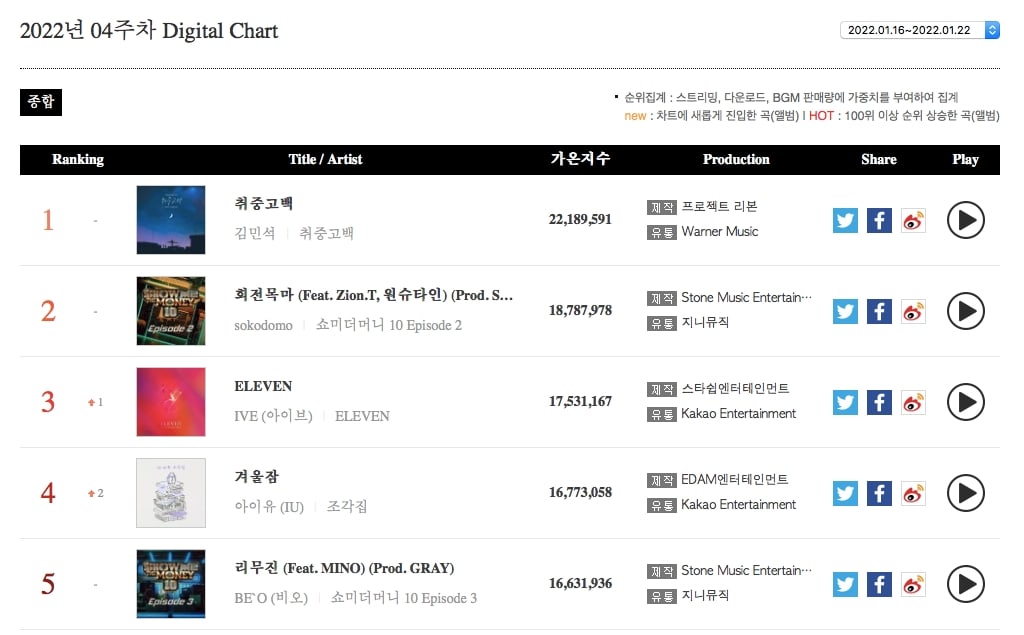 The top three songs on this week’s streaming chart were exactly the same as the overall digital chart: Kim Min Seok’s “Drunken Confession” came in at No. 1, sokodomo’s “Merry-Go-Round” at No. 2, and IVE’s “ELEVEN” at No. 3.

BE’O swept the next two spots on the chart, with “Limousine” at No. 4 and “Counting Stars” (featuring Beenzino) at No. 5. 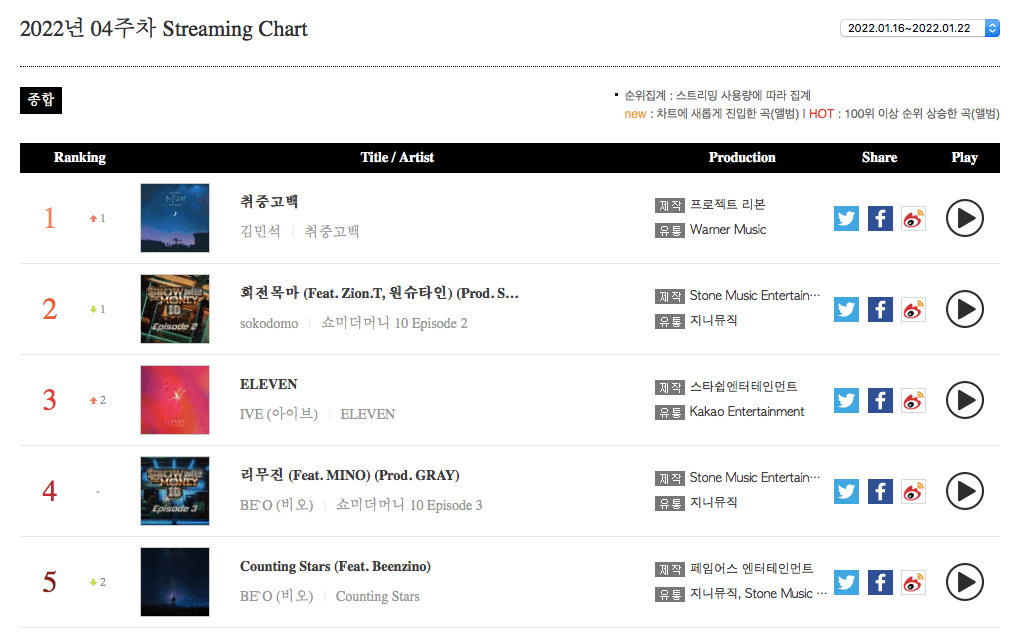 The top five artists on this week’s social chart were exactly the same as last week: BTS continued their reign at No. 1, followed by BLACKPINK at No. 2, BLACKPINK’s Lisa at No. 3, Lim Young Woong at No. 4, and Kim Ho Joong at No. 5. 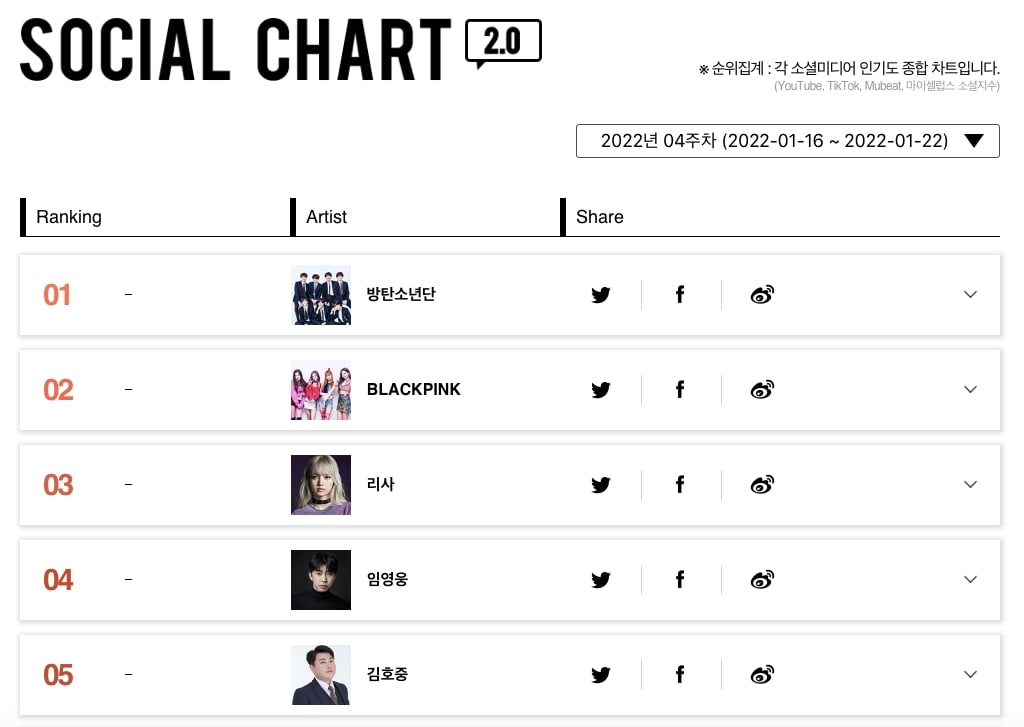