9 Culinary K-Dramas That Will Tickle Your Taste Buds

Food plays a major role in Korean culture and is strongly present in Korean television. While most viewers get starry-eyed over the lead characters or the compelling story, some have their hearts captivated by the magic that happens in the kitchen. Both Korean and international cuisine in K-dramas never fail to make our mouths water. If you love teasing your taste buds while watching a great comedy, drama, or sageuk, we have just the thing for you in the list below!

This romantic comedy stars Jung Il Woo as Chef Park Jin Sung, Kang Ji Young as variety show PD Kim Ah Jin, and Lee Hak Joo as designer Kang Tae Wan. The love triangle binding these three characters is quite interesting, as the fight this time is over a man.

Park Jin Sung owns a bistro where many people come to heal their hearts and leave their stress behind through his delicious food. Watching succulent treats being served at this restaurant day in and day out is sure to get your stomach growling with every take, especially tofu stew, fried chicken, and more. Jung Il Woo’s inner chef manifests himself abundantly through his unique meal preparation process, and the fact that he personally took part in cooking makes it all the more relatable and intriguing to watch! 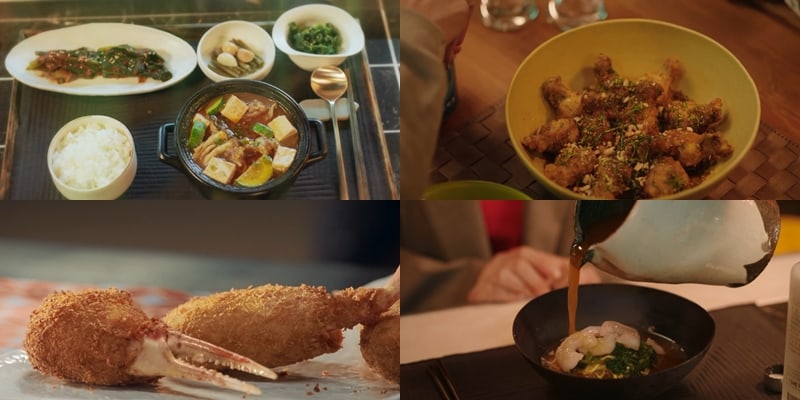 Chef Moon is known for making Korean cuisine known worldwide through pop-up restaurants. Additionally, he makes sure to handpick his ingredients even if that means going abroad to get the freshest sets. This careful attention to detail makes even a well-seasoned rice bowl a delightful meal. Plus the fact that Eric already guest-starred in cooking variety programs such as tvN’s “Three Meals a Day” makes this drama an appetizing journey for viewers to (re)discover Korean food and enjoy Eric’s sharp knife skills.

This drama is a fan favorite, starring Park Bo Young as Na Bong Sun, an awkward kitchen assistant who keeps finding herself in trouble with her difficult boss Kang Sun Woo, played by Jo Jung Suk, after being possessed by a virgin ghost.

Being mainly filmed in the kitchen, this drama gives you a taste of the whole atmosphere that takes place prior to being served a hot and delicious meal. One of the things to definitely keep you hooked is the interpersonal relationship Chef Kang Sun Woo has with his staff, as he buys them meals and teaches them a lot in terms of culinary art. Watching all these sizzling pans bringing exquisite dishes to life – especially the pasta scenes – is simply to die for, but most importantly, Na Bong Sun’s signature ginger chicken porridge recipe is one meal you won’t forget as it not only warms bellies but also hearts.

This web drama also brings a baking master and a TV show staff member together. EXO’s Suho stars as Ha Do Woo, a gifted baker who keeps rejecting the offer of scriptwriter Noh Mi Rae, played by Lee Se Young, who would stop at nothing to cast him in her new baking competition show.

The entire story revolves around the mystery behind Do Woo’s magical and tasty bread that not only grants wishes but also allows people to get in touch with their feelings, which makes Mi Rae even more determined to get the genius baker to take part in her show. On top of teasing your sweet tooth with all the tasty bites featuring in this web drama, watching Suho being meticulous in making his craft is undoubtedly the icing on the cake!

Catch the first episode of “How Are You Bread”:

If you’re a fan of Chinese cuisine, then look no further because this drama will get your brain and your tummy hooked. 2PM’s Junho stars as Seo Poong, a two-time Michelin star awarded chef. Once owning an exquisite Chinese restaurant, an unfortunate turn of events makes him lose everything and he ends up working at a lowly neighborhood restaurant instead.

A sprinkle of romance, a drop of action, and a full Chinese menu pretty much sum up this drama. Plus, you simply cannot disregard Junho’s amazing wok handling game. This drama is basically the perfect 101 course introducing you to a savory variety of buns, noodle soups, and dumplings, with jjajangmyeon being ever so present. If you miss all the goodies that have been featured on the show, take a look here for a reminder! 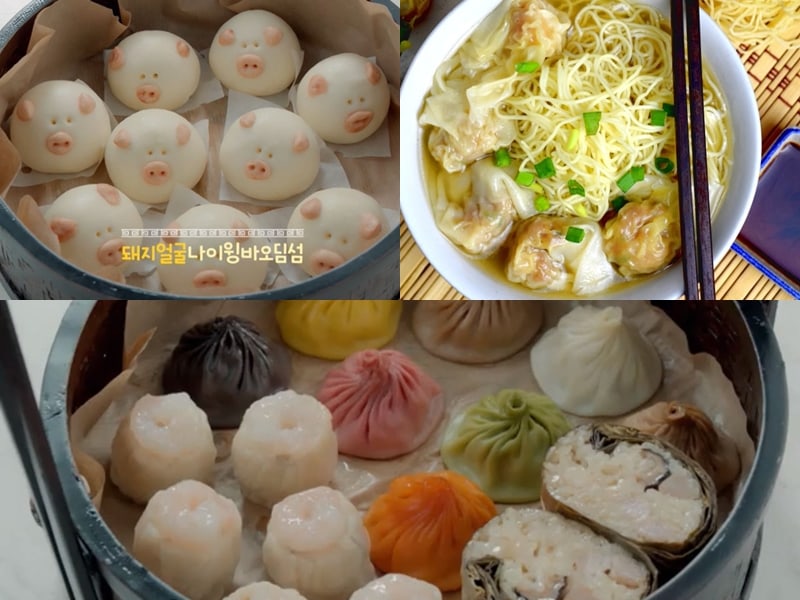 Catch the first episode of “Wok of Love”: 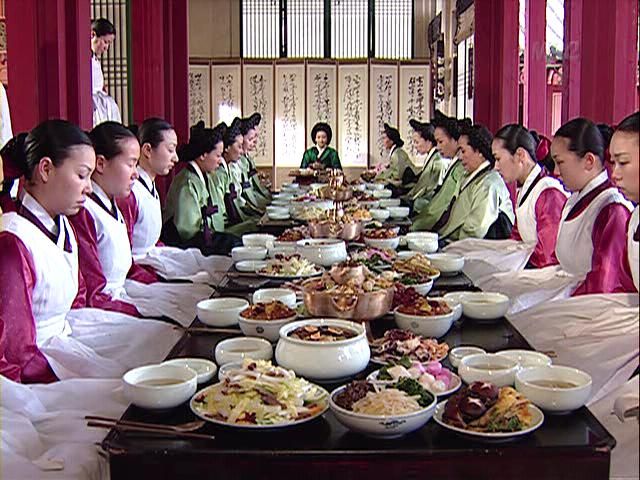 If you thought there was no room for food in historical dramas, think again! Dae Jang Geum, played by Lee Young Ae, is a servant with a keen sense of taste who works her way up to become a cook before she eventually becomes the first female royal physician in Korean history.

Being one of the top 10 dramas of all time, this drama introduced Korean traditional gastronomy in all its shapes and forms to the world and left many viewers drooling over the irresistible food display throughout the lengthy sageuk. The impressive and alluring detail in Korean royal court cuisine is what seems to be an endless and versatile amount of side dishes such as japchae, pajeon, and saengchae accompanying the main course like bibimbap (previously known as goldongban), nanmyeon, and mandu, all of which ornate the royal banquet.

Catch the first episode of “Jewel in the Palace”:

Foodies, assemble! “Let’s Eat” stars Yoon Doojoon as salesman Goo Dae Young, who acts friendly around people to persuade them to buy insurance. He is also secretly a food blogger. In the first season, he gets acquainted and shares his love for food with Soo Kyung, played by Lee Soo Kyung, a manager who always yearns for company during a meal, especially when she’s out and about discovering new restaurants. From a simple sunny-side-up with fried rice all the way to creamy pasta dishes and a heavenly onion soup bread bowl, “Let’s Eat” is pretty much international!

In the second season, Yoon Doojoon is joined this time by Seo Hyun Jin, who plays Baek Soo Ji, a freelance writer and Goo Dae Young’s childhood friend. To bury the hatchet that stemmed from a past feud, Dae Young promises to help Soo Ji on her love quest. Naturally, Korean food easily finds its way in the story and poses quite a challenge for Soo Ji given her strict diet. Meals like gamjatang (pork-bone soup), bibimbap, and fried chicken all find their way in this hors d’oeuvre of a drama.

The plot gets twisted a bit in the third season, as Goo Dae Young finds himself in a dark place mentally, but his love and opinion regarding food are still going strong. In a way to get his life together, he goes on a reminiscing quest through all the meals he once enjoyed when he was younger, joined by his college friend Lee Ji Woo (Baek Jin Hee). Crustacean delights, spicy chicken soup, and the famous rabokki (ramyun + tteokbokki) are but a few of the many delicious recipes that feature in the third installment of the series.

We don’t always see K-dramas having multiple seasons, but when we do it’s definitely worth the hype. The “Let’s Eat” series introduces viewers to satiating Korean cuisine that is bound to work up an appetite for every inner foodie that diligently watches it!

Which K-drama speaks to your taste buds the most? Did we miss any? Let us know in the comments below!

Soompi Spotlight
Let's Eat
Let's Eat 2
How Are You Bread
Jewel in the Palace
Oh My Ghostess
Let's Eat 3
Wok of Love
Eccentric! Chef Moon
Sweet Munchies
How does this article make you feel?