EXO’s Baekhyun topped the physical album chart for March with his new solo mini album “Bambi,” which impressively debuted at No. 1 despite being released right before the end of the month on March 30.

Super Junior’s latest album “The Renaissance” entered the chart at No. 2, followed by BLACKPINK’s Rosé’s first solo single album “R” at No. 3.

Finally, ATEEZ’s “ZERO : FEVER Part.2” and IU’s “LILAC” rounded out the top five for the month at No. 4 and No. 5 respectively. 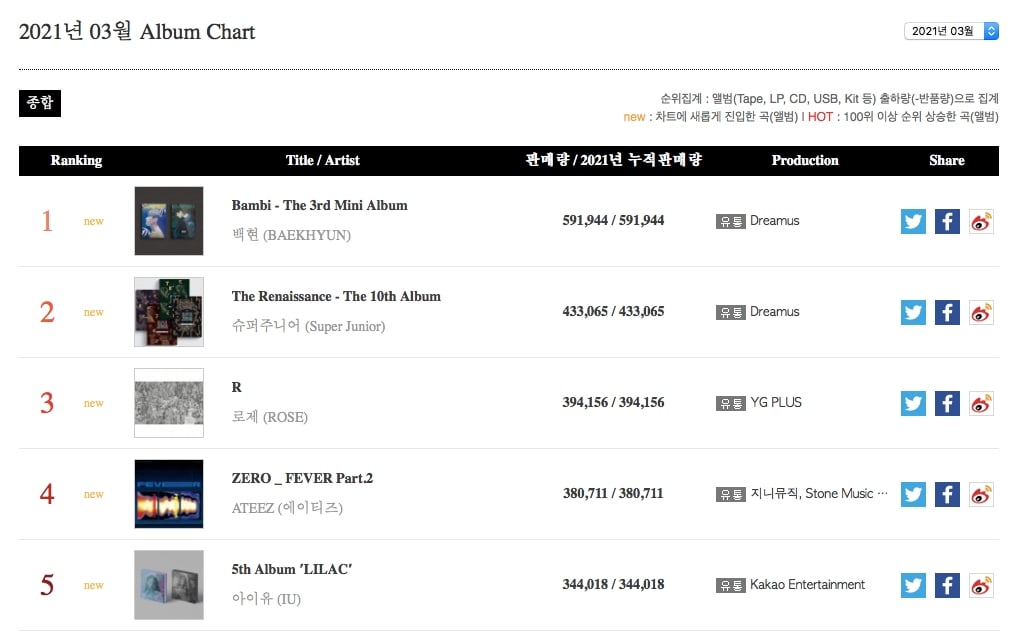 Baekhyun’s “Bambi” also debuted at No. 1 on the weekly album chart for the week of March 28 to April 3.

Notably, NCT 127’s repackaged album “Neo Zone: The Final Round,” which was released nearly a year ago, reentered the chart at No. 5 this week. 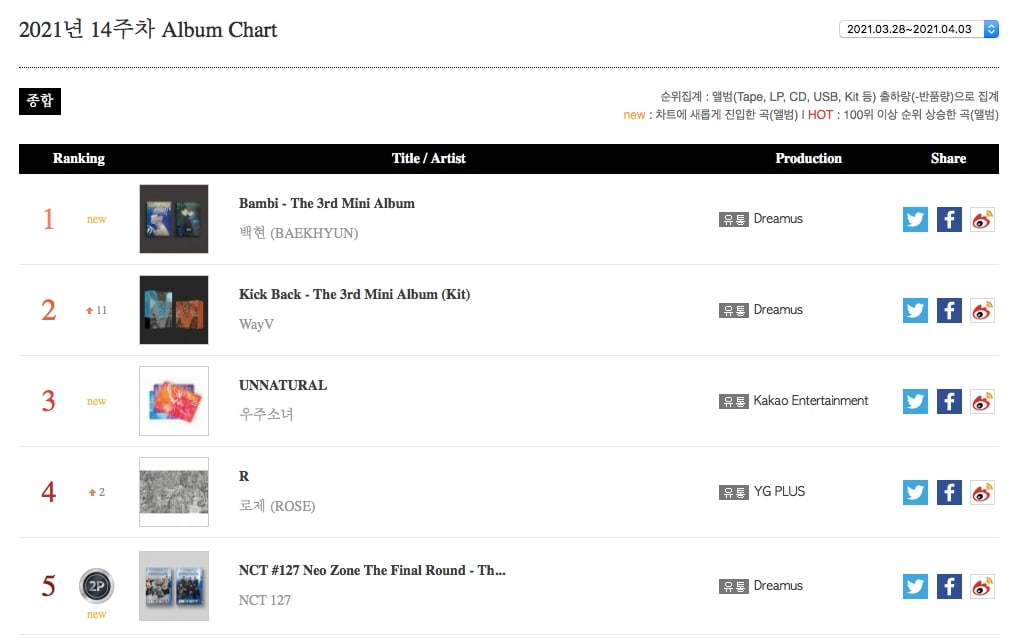 Brave Girls achieved a double crown for the month of March after topping both the overall digital chart and the streaming chart with their smash hit “Rollin’.”

IU’s “Celebrity” followed at No. 2 on the overall digital chart for March, trailed by Im Young Woong’s “My Starry Love” at No. 3. Highlight’s Yang Yoseob and Apink’s Jung Eun Ji’s “Love Day (2021)” entered the chart at No. 4, and Rosé’s solo debut track “On The Ground” came in at No. 5. 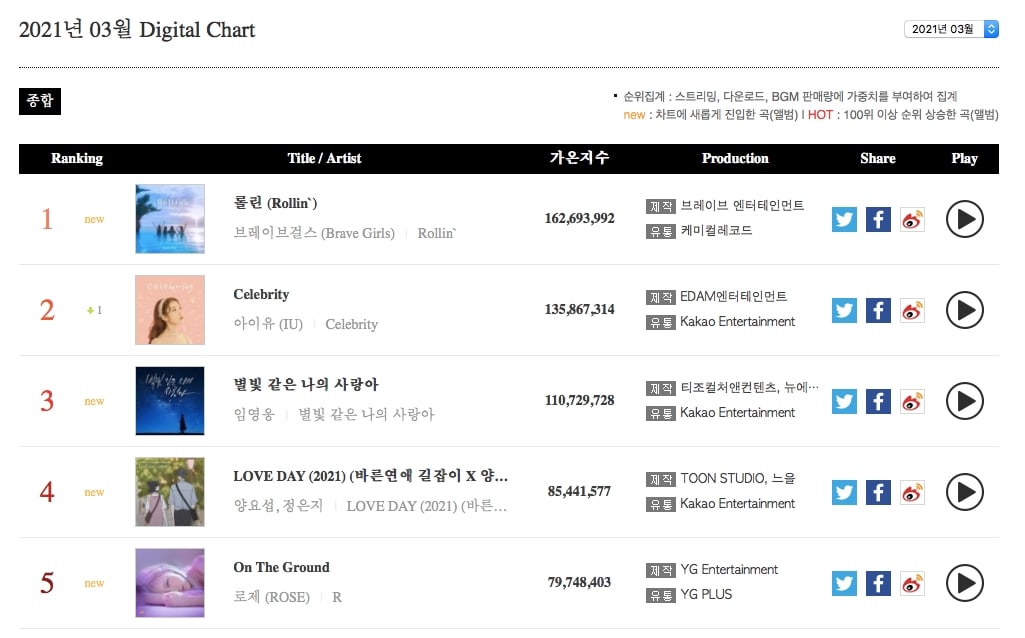 Meanwhile, IU achieved her own double crown on the weekly charts, where her new title track “LILAC” rose to No. 1 on both the overall digital chart and the streaming chart.

Not only did IU top the weekly digital chart, but she also claimed three out of the top five spots: her pre-release track “Celebrity” stayed strong at No. 3, while her second title track “Coin” climbed to No. 4 for the week.

Brave Girls’ “Rollin'” stayed strong at No. 2 on the chart, and Im Young Woong’s “My Starry Love” rounded out the top five for the week. 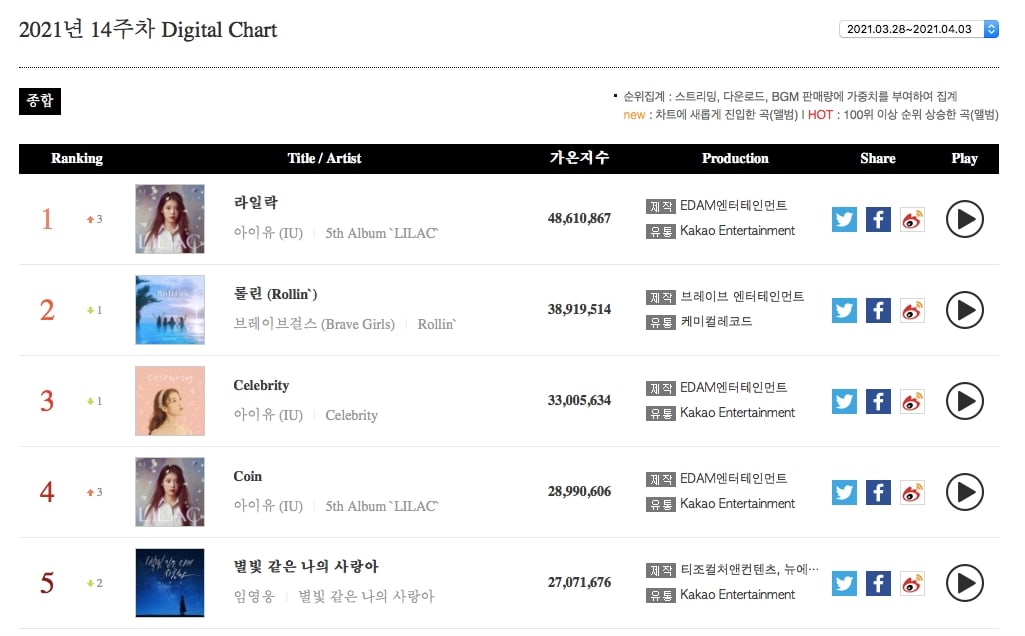 Brave Girls’ “Rollin'” entered the streaming chart at No. 1 for March, followed by IU’s “Celebrity” at No. 2. 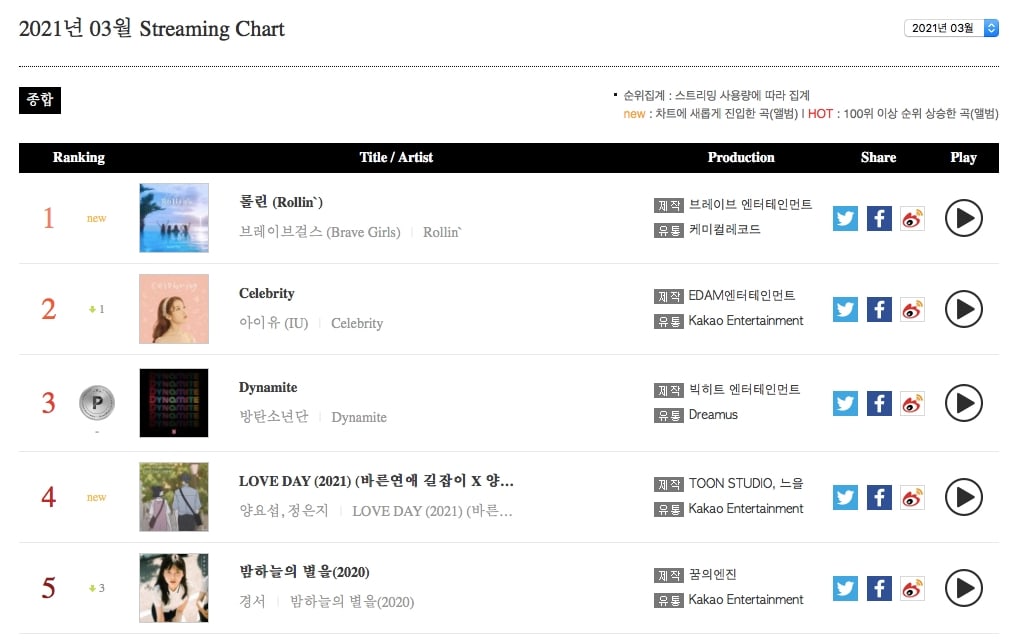 The top four spots on this week’s streaming chart were exactly the same as the overall digital chart: IU claimed No. 1 on the chart with “LILAC,” No. 3 with “Celebrity,” and No. 4 with “Coin,” while Brave Girls took No. 2 with “Rollin’.” Finally, Rosé’s “On The Ground” rounded out the top five for the week. 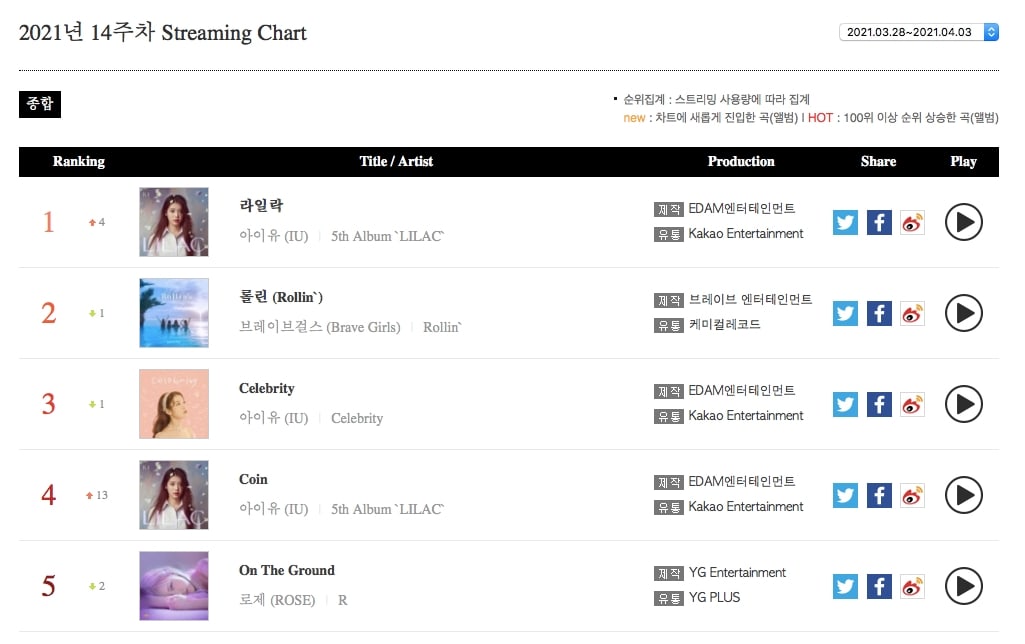 Im Young Woong’s “My Starry Love” topped the digital download chart for March, followed by SHINee’s latest title track “Don’t Call Me” at No. 2. Kang Daniel’s “PARANOIA” came in at No. 3 for the month, Brave Girls’ “Rollin'” at No. 4, and ONF’s “Beautiful Beautiful” at No. 5. 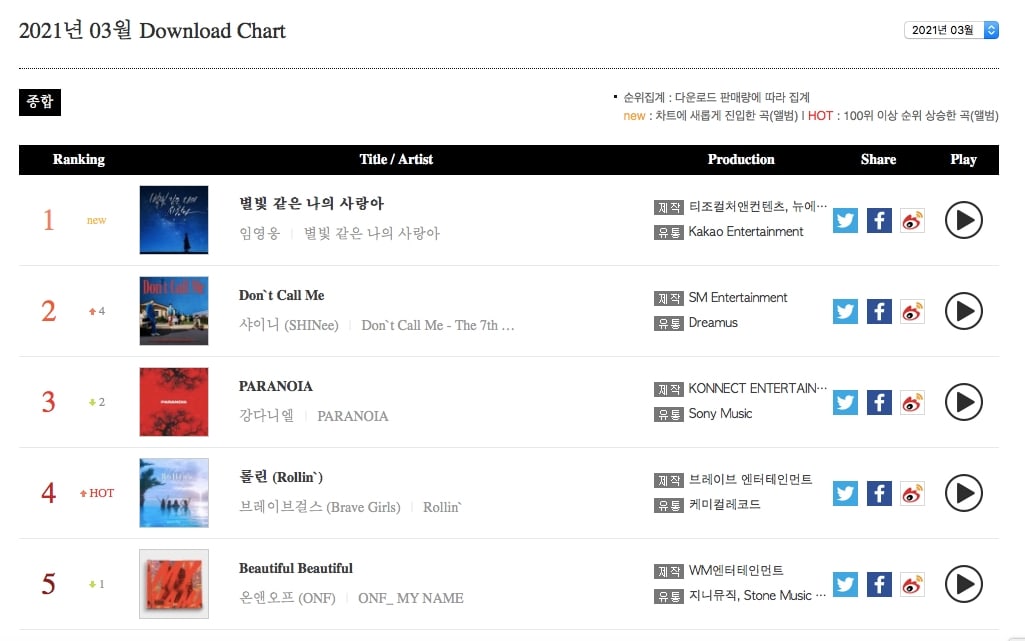 Im Young Woong also remained No. 1 on the weekly download chart with “My Starry Love,” while Baekhyun’s new title track “Bambi” debuted at No. 2. IU swept the next two spots on the chart with her double title tracks “LILAC” and “Coin” at No. 3 and No. 4 respectively, followed by PENTAGON’s “DO or NOT” at No. 5. 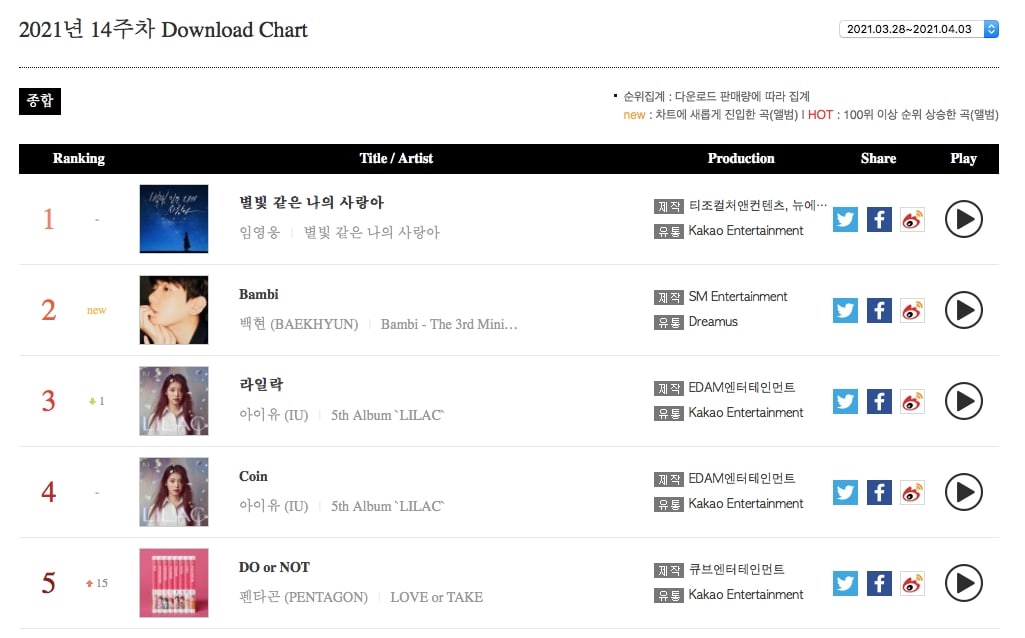 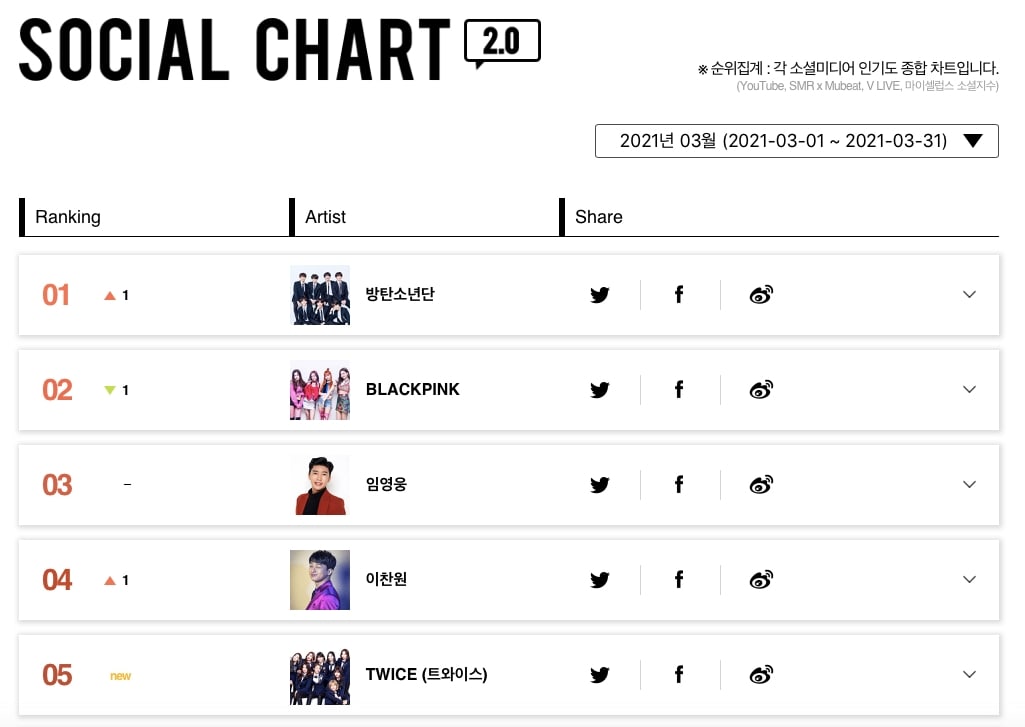 The top four artists on this week’s social chart were exactly the same as last week: BTS remained No. 1, with BLACKPINK at No. 2, Im Young Woong at No. 3, and Lee Chan Won at No. 4. Finally, IU rose to No. 5 for the week. 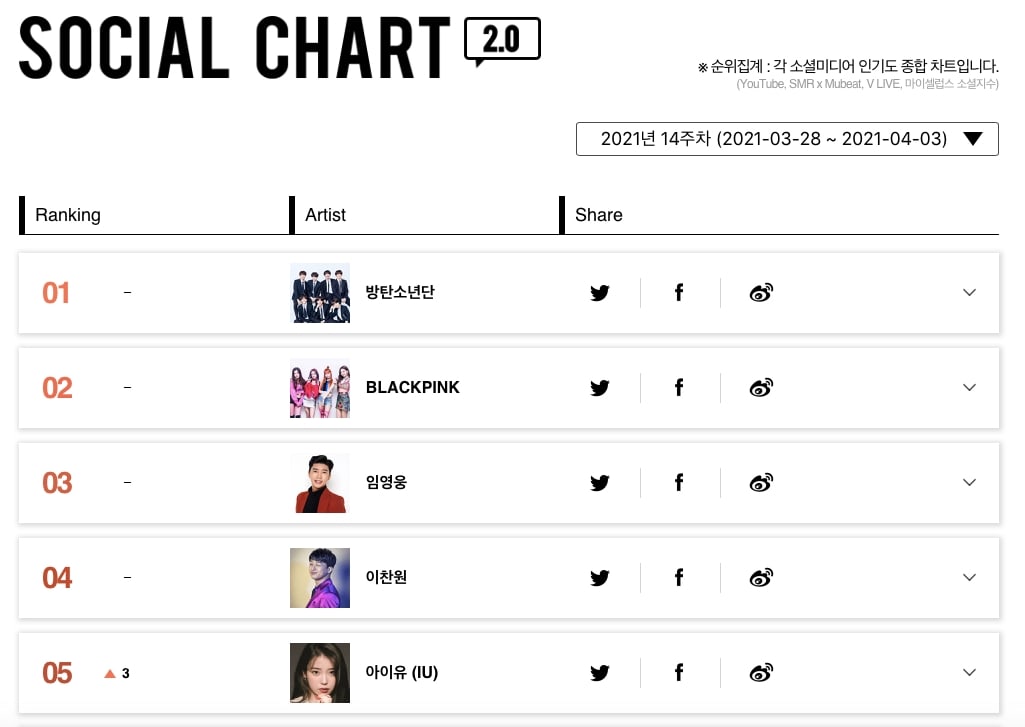