On September 17, Gaon Chart announced that both BTS and Taemin had officially earned double crowns for the week of September 6 to September 12 after topping two separate charts each.

BTS topped both the overall digital chart and the streaming chart for the third consecutive week with their latest hit “Dynamite,” which remained No. 1 on both charts.

Finally, BLACKPINK continued their reign at No. 1 on Gaon’s Social Chart 2.0 for the 16th week in a row.

Taemin’s “Never Gonna Dance Again : Act 1” debuted at No. 1 on the weekly physical album chart, while Super Junior D&E’s “BAD BLOOD” held onto its spot at No. 2 for the second week in a row. Oh My Girl’s YooA’s solo debut mini album “Bon Voyage” entered the chart at No. 3, followed by TREASURE’s “THE FIRST STEP : CHAPTER ONE” at No. 4 and Wonho’s “Part.1 Love Synonym (#1) Right for Me” at No. 5. 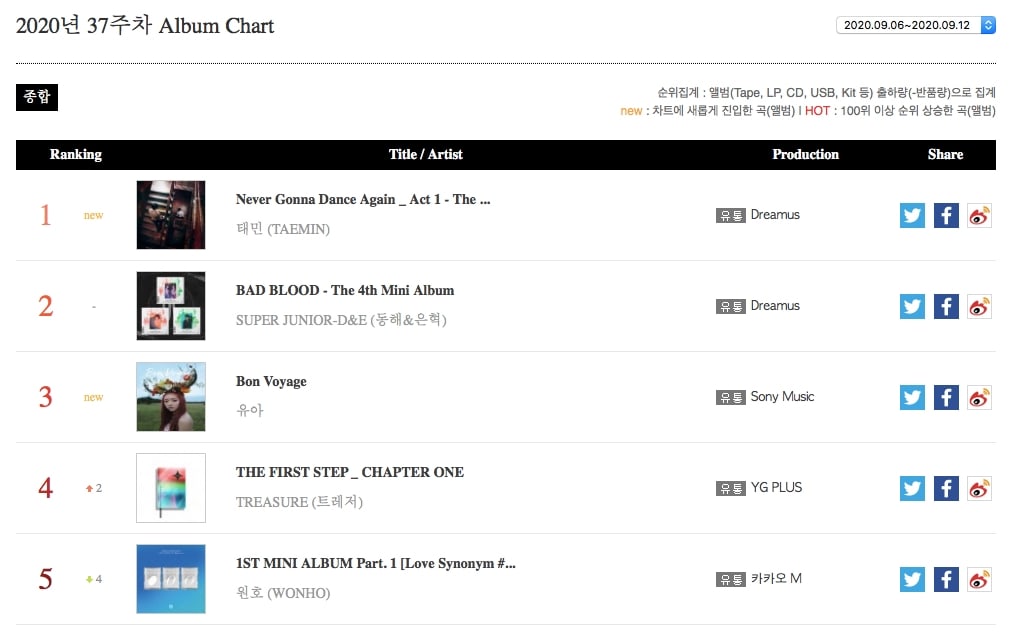 Taemin’s “Criminal” debuted at No. 1 on this week’s digital download chart, with BTS’s “Dynamite” staying strong at No. 3. Meanwhile, trot singer Kim Ho Joong claimed three out of the top five spots on this week’s chart: his song “I’m Alive Because of You” entered the chart at No. 2 this week, trailed by “In Full Bloom” at No. 4 and and “No Umbrella” at No. 5. 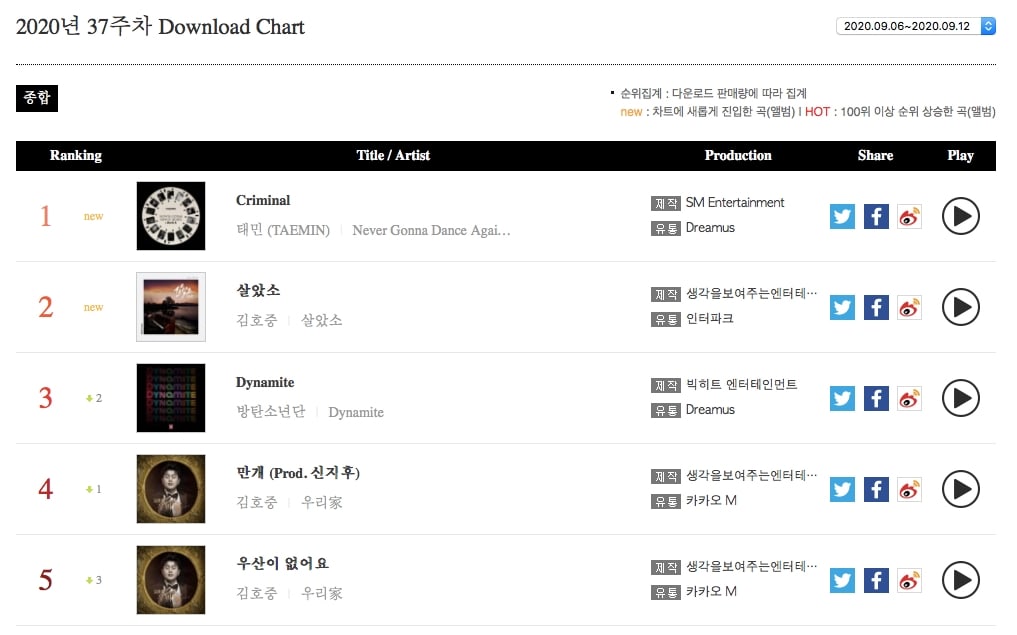 The top five songs on the overall digital chart and the streaming chart were exactly the same this week: BTS’s “Dynamite” claimed No. 1 on both charts, followed by B1A4’s Sandeul’s “Slightly Tipsy” at No. 2, SSAK3’s “Beach Again” at No. 3, Jessi’s “NUNU NANA” at No. 4, and MAMAMOO’s Hwasa‘s “Maria” at No. 5. 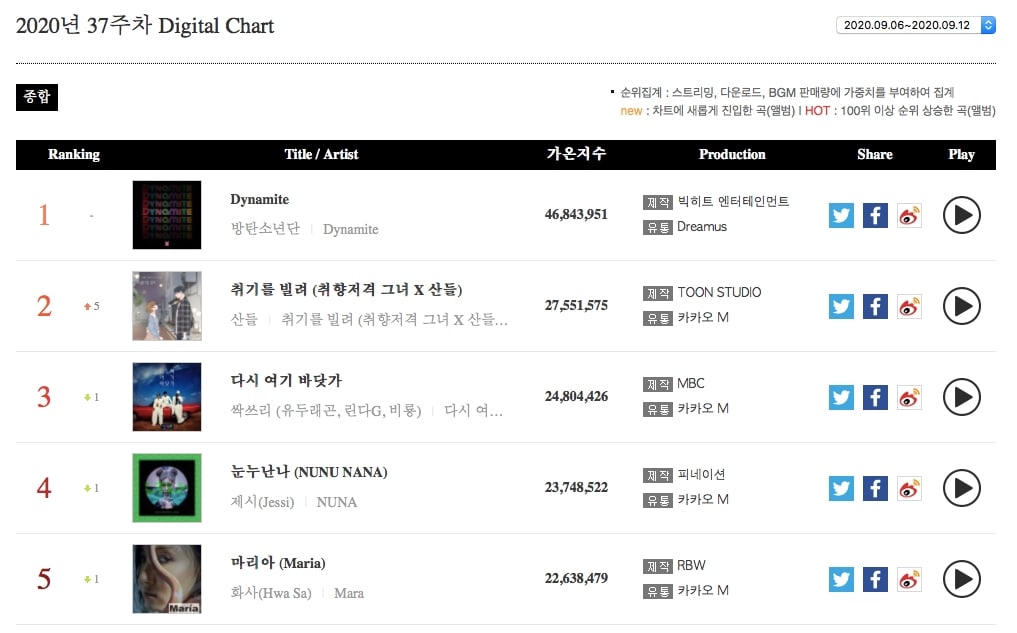 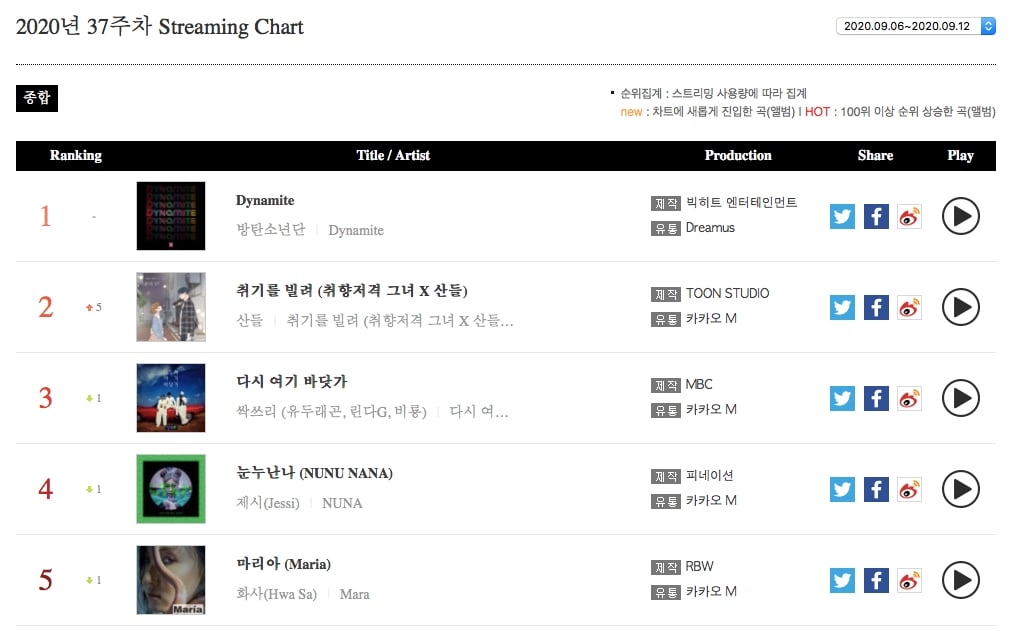 BLACKPINK remained No. 1 on Gaon’s Social Chart 2.0 for the 16th consecutive week, while BTS rose to No. 2. Yang Joon Il and Im Young Woong came in at No. 3 and No. 4 respectively, with YooA entering the chart at No. 5. 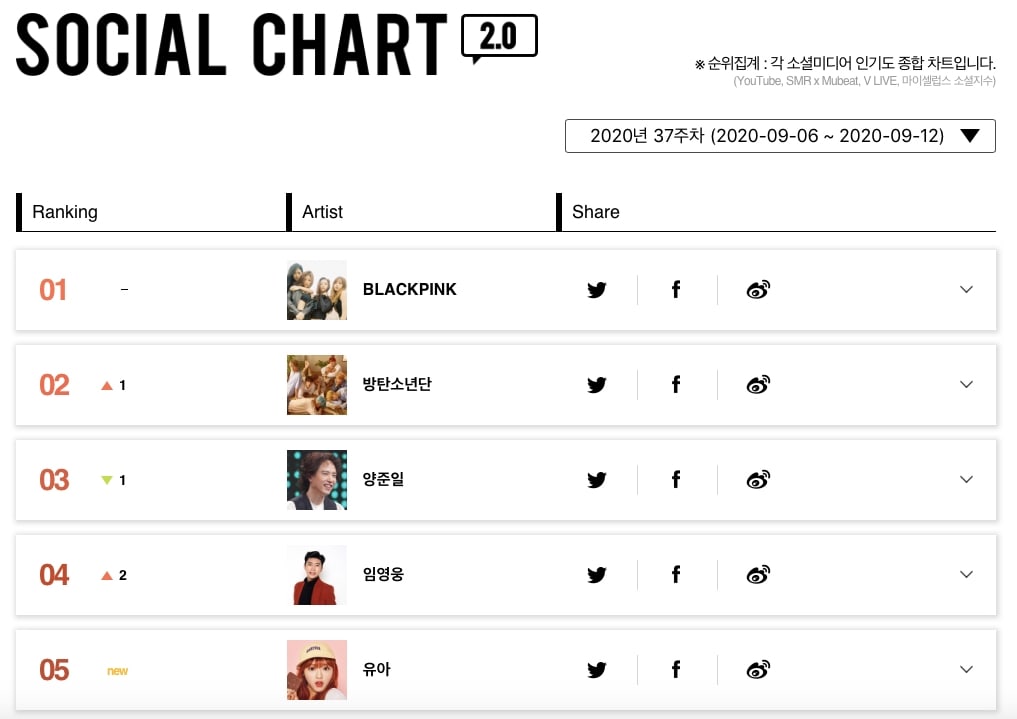