BTS has swept this week’s Gaon charts with their latest hit!

On September 3, Gaon Chart officially announced that BTS had earned a quadruple crown for the week of August 23 to August 29 after topping four separate charts with their new single “Dynamite.”

“Dynamite” claimed No. 1 on this week’s overall digital chart, streaming chart, digital download chart, and BGM chart (which tracks the songs that people purchase to use as background music for their blogs and KakaoTalk profiles).

Starship Entertainment’s rookie boy group CRAVITY topped this week’s physical album chart with “HIDEOUT: THE NEW DAY WE STEP INTO,” which entered the chart at No. 1.

ATEEZ’s “ZERO : FEVER Part.1,” which previously debuted at No. 1 on the chart, climbed back up to No. 2 this week. MCND’s “EARTH AGE” made its debut at No. 3, followed by DreamCatcher’s “Dystopia : Lose Myself,” which stayed strong at No. 4. Finally, ONF’s “SPIN OFF” rose six spots in the rankings to claim No. 5 for the week. 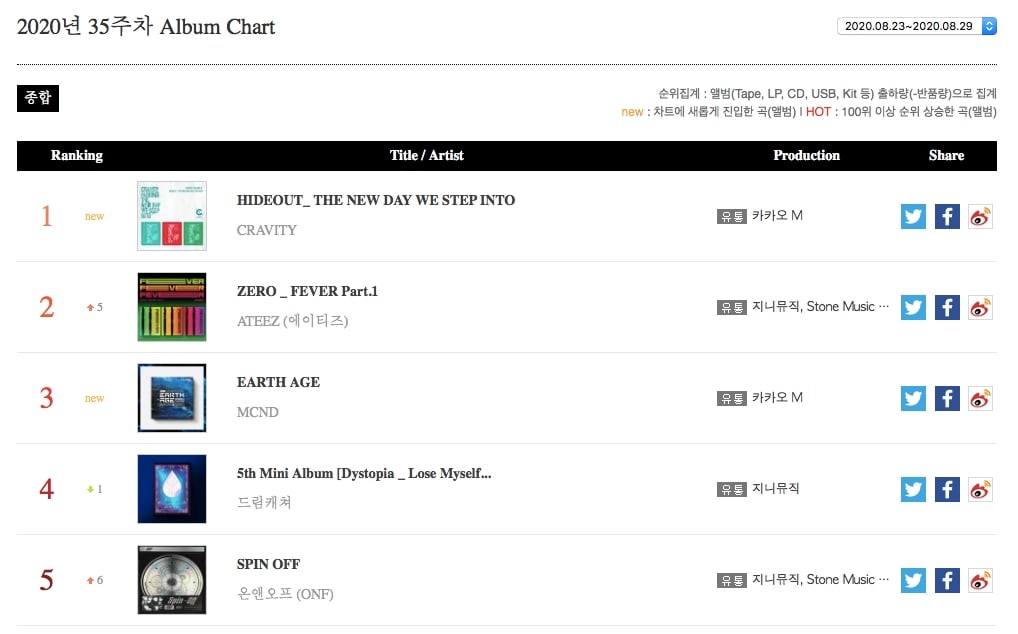 BTS’s “Dynamite” rose to No. 1 on this week’s overall digital chart, dethroning SSAK3’s “Beach Again,” which fell to No. 2 after five consecutive weeks at No. 1. Jessi’s “NUNU NANA” came in at No. 3, trailed by MAMAMOO’s Hwasa‘s “Maria” at No. 4. Park Jin Young’s duet with Sunmi, “When We Disco,” rounded out the top five for the week. 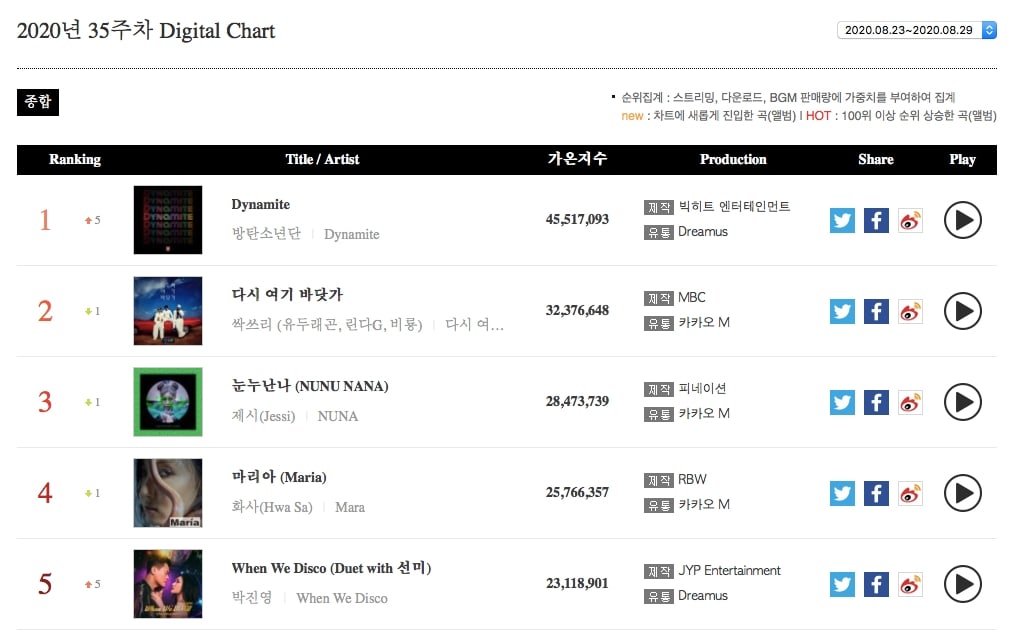 BTS’s “Dynamite” remained No. 1 on the digital download chart for the second consecutive week, while Kim Jae Hwan’s new single “I’m Not Okay” entered the chart at No. 2 and Park Jin Young’s “When We Disco” held onto its spot at No. 3.

BLACKPINK’s new collaboration with Selena Gomez, “Ice Cream,” debuted at No. 4 on this week’s chart, while Super Junior’s Kyuhyun‘s new OST “The Moment My Heart” debuted at No. 5. 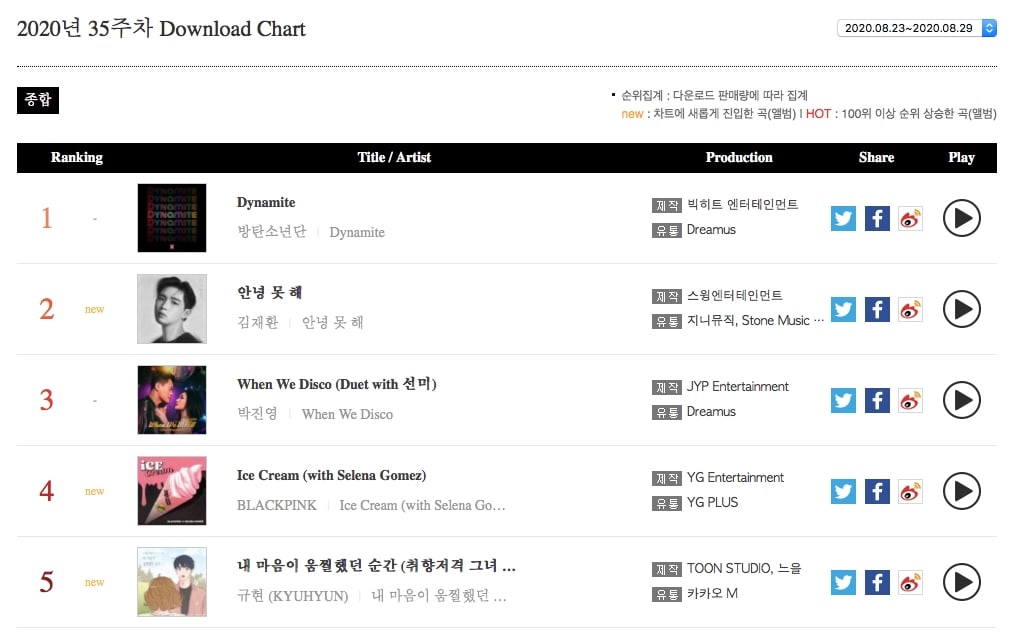 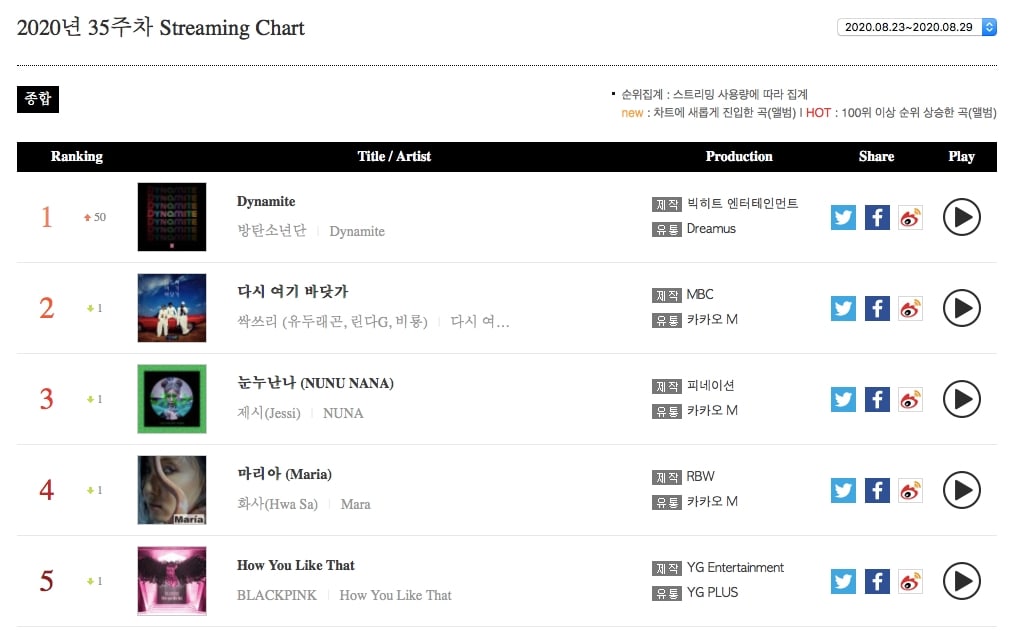 BLACKPINK continued their reign over Gaon’s Social Chart 2.0 for the 14th consecutive week, while BTS maintained their position at No. 2. Yang Joon Il rose to No. 3 this week, while trot singers Kim Ho Joong and Im Young Woong came in at No. 4 and No. 5 respectively. 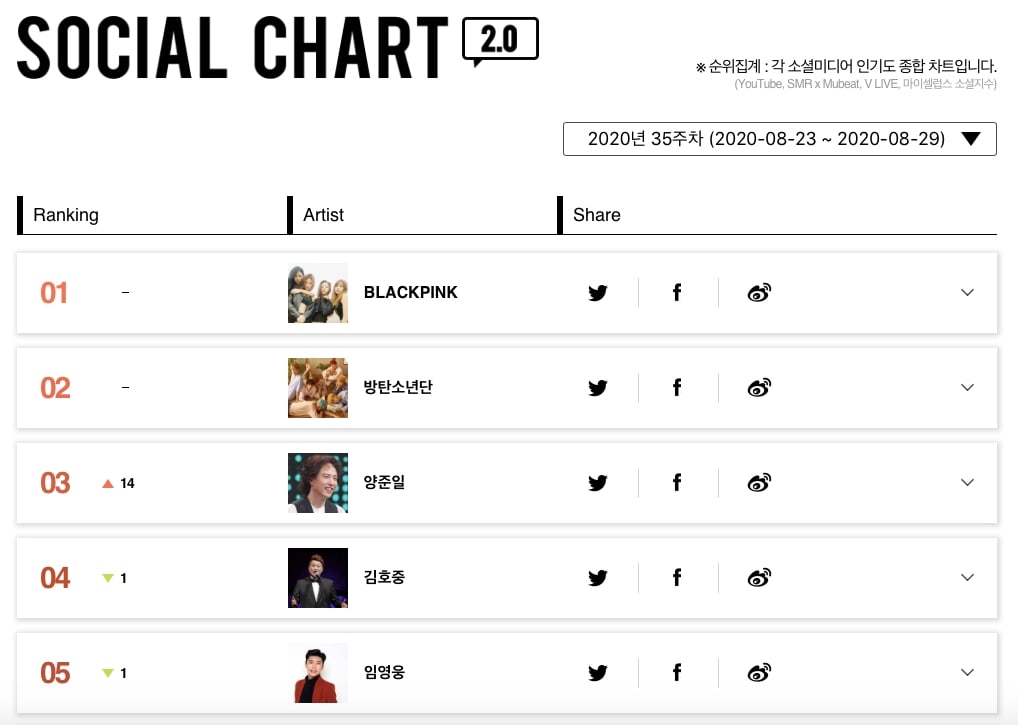