Wonho’s solo debut mini album “Part.1 Love Synonym (#1) Right for Me” claimed No. 1 on the physical album chart for the week of August 30 to September 5, which was dominated by new releases.

Super Junior D&E’s new mini album “BAD BLOOD” debuted at No. 2 this week, followed by DAY6’s new unit Even of Day’s first mini album “The Book of Us : Gluon – Nothing can tear us apart,” which entered the chart at No. 3.

Finally, A.C.E’s “HJZM : The Butterfly Phantasy” and Lovelyz’s “Unforgettable” made their respective debuts on the chart at No. 4 and No. 5. 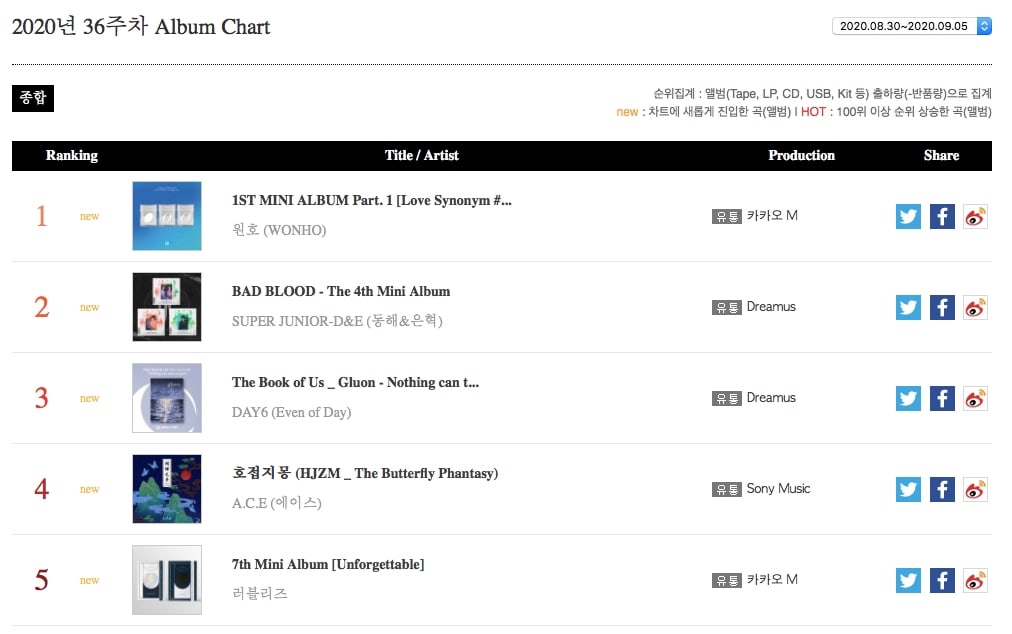 Kang Daniel’s “MAGENTA,” which previously debuted at No. 1 on Gaon’s weekly chart, topped the physical album chart for August. TREASURE’s solo debut single “THE FIRST STEP : CHAPTER ONE” entered the chart at No. 2, followed by ITZY’s “Not Shy” at No. 3.

ATEEZ’s “ZERO : FEVER Part.1,” which received an official platinum certification this month, stayed strong at No. 4, while CRAVITY’s “HIDEOUT: THE NEW DAY WE STEP INTO” debuted on the chart at No. 5. 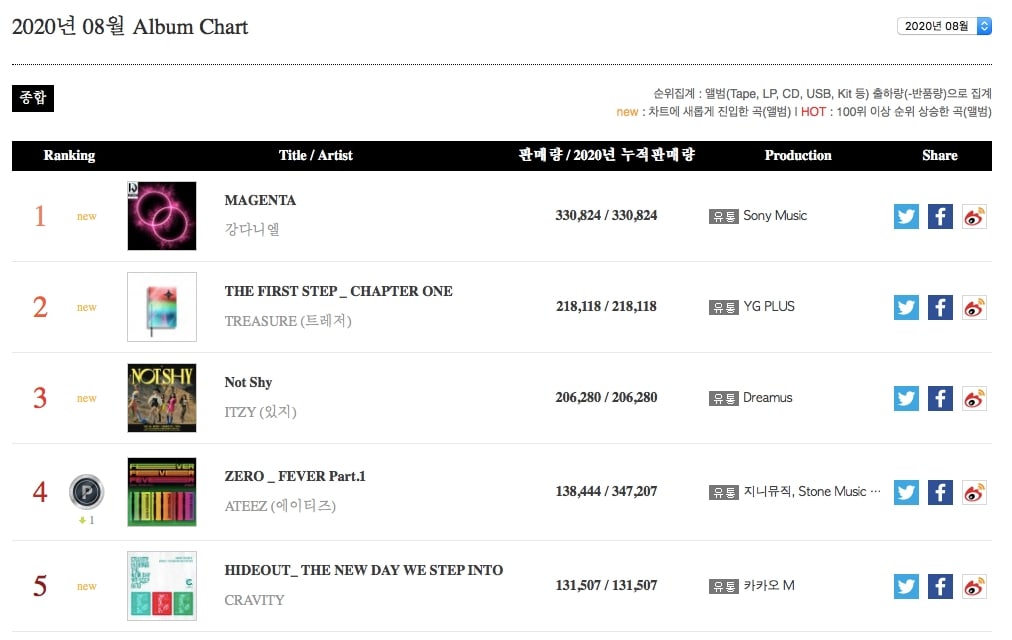 BTS successfully maintained their quadruple crown with their new song “Dynamite” this week: the hit single topped the overall digital chart, streaming chart, digital download chart, and BGM chart (which tracks the songs that people purchase to use as background music for their blogs and KakaoTalk profiles) for the second week in a row.

Trot singer Kim Ho Joong swept both the No. 2 and No. 3 spots on this week’s digital download chart with his new songs “No Umbrella” and “In Full Bloom” respectively. Super Junior D&E’s new title track “B.A.D” debuted at No. 4 on the chart, while BLACKPINK’s “Ice Cream” (with Selena Gomez) rounded out the top five for the week. 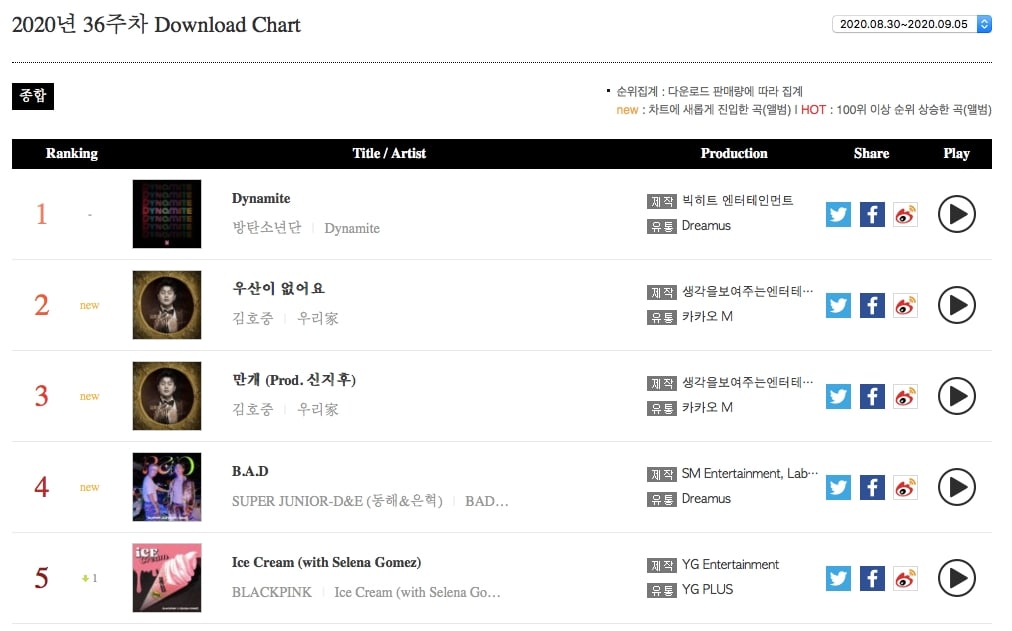 BTS’s “Dynamite” also took No. 1 on the monthly digital download chart for August, trailed by Kang Daniel’s “Who U Are” at No. 2.

“How Do You Play?” project group SSAK3 claimed the next three spots on the chart, with their official debut track “Beach Again” leading at No. 3. Rain’s solo song “Let’s Dance” (featuring MAMAMOO), which he released under his SSAK3 stage name B-Ryong, came in at No. 4; and Lee Hyori’s solo song as Linda G, “Linda” (featuring Yoon Mi Rae), followed at No. 5. 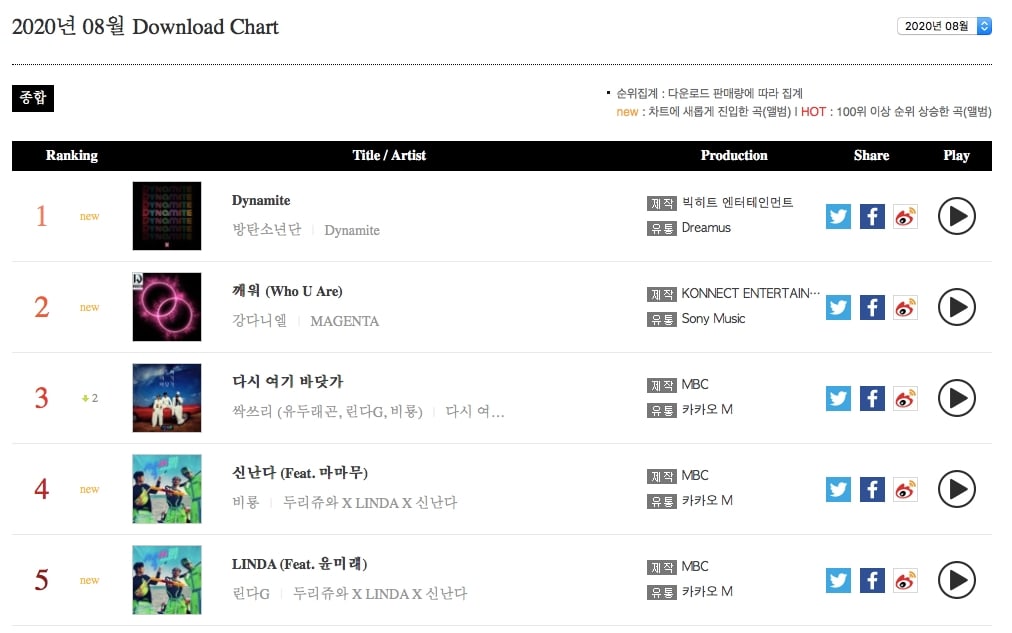 The top five songs on the overall digital chart and the streaming chart were exactly the same this week: BTS’s “Dynamite” remained No. 1 on both charts, with SSAK3’s “Beach Again” at No. 2, Jessi’s “NUNU NANA” at No. 3, MAMAMOO’s Hwasa‘s “Maria” at No. 4, and Park Jin Young’s duet with Sunmi, “When We Disco,” at No. 5. 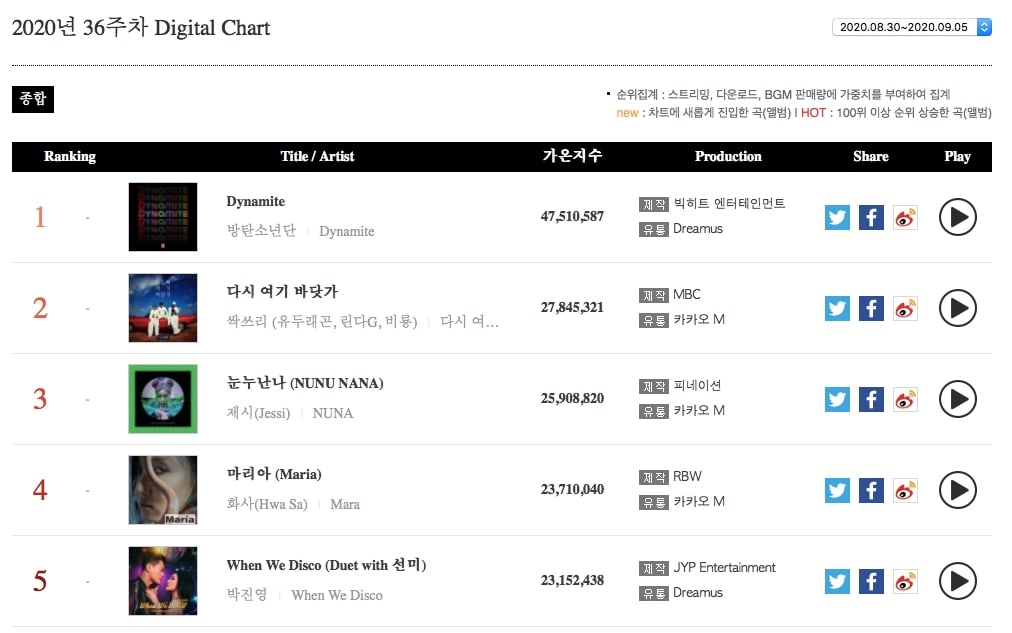 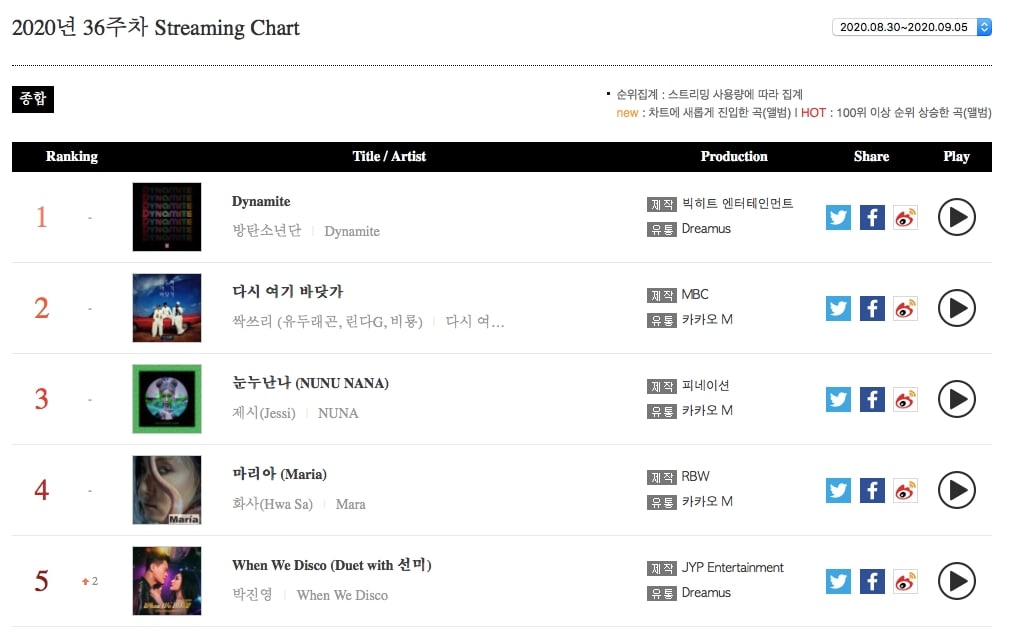 The top five songs on the overall digital chart and the streaming chart were also exactly the same for the month of August: SSAK3’s “Beach Again” topped both charts, followed by Hwasa’s “Maria” at No. 2, SSAK3’s “Play That Summer” at No. 3, BLACKPINK’s “How You Like That” at No. 4, and Jessi’s “NUNU NANA” at No. 5. 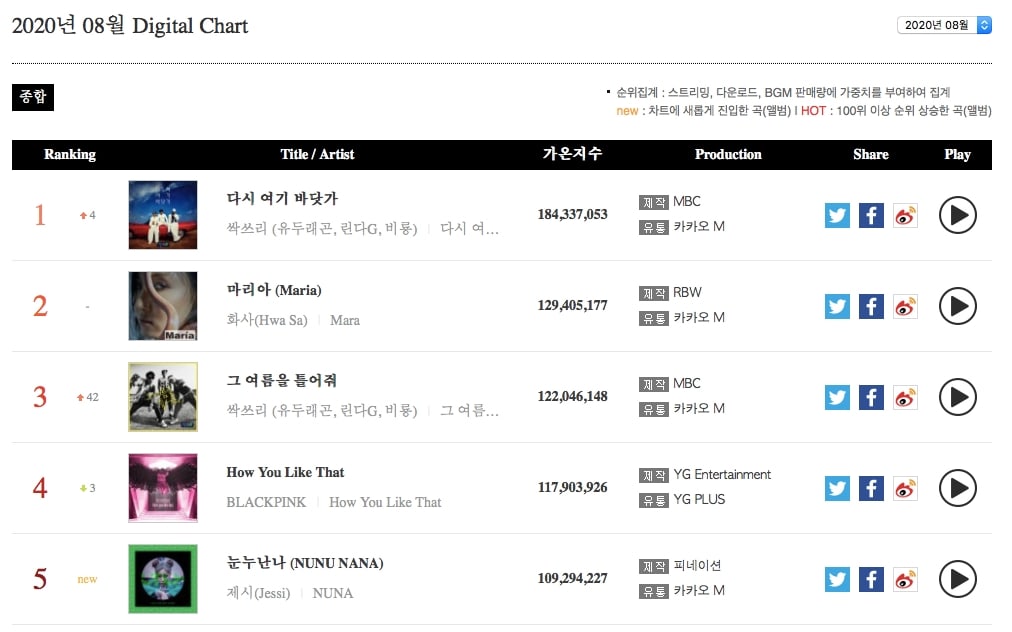 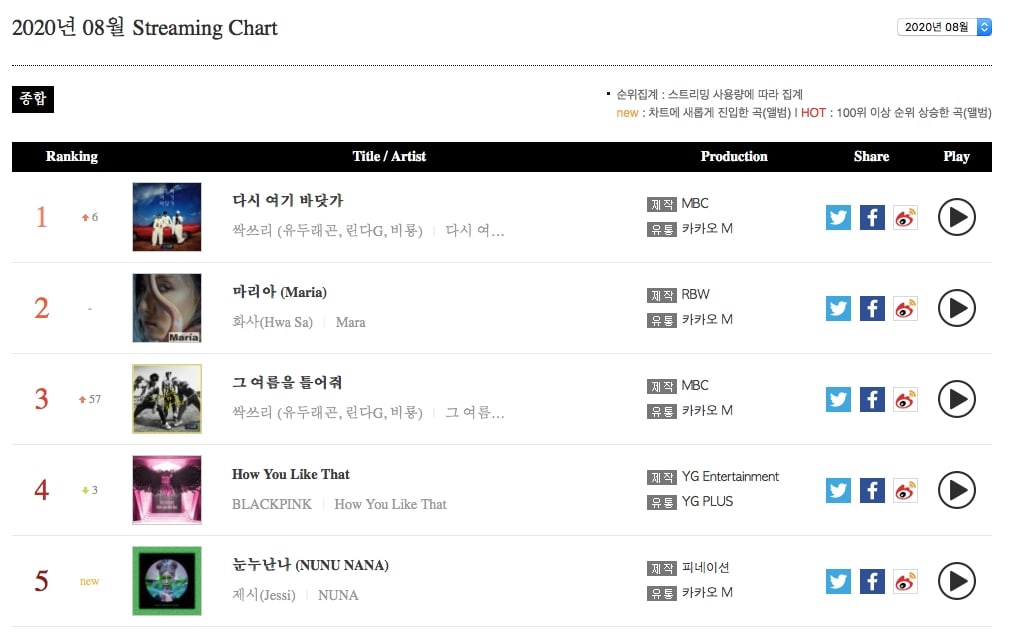 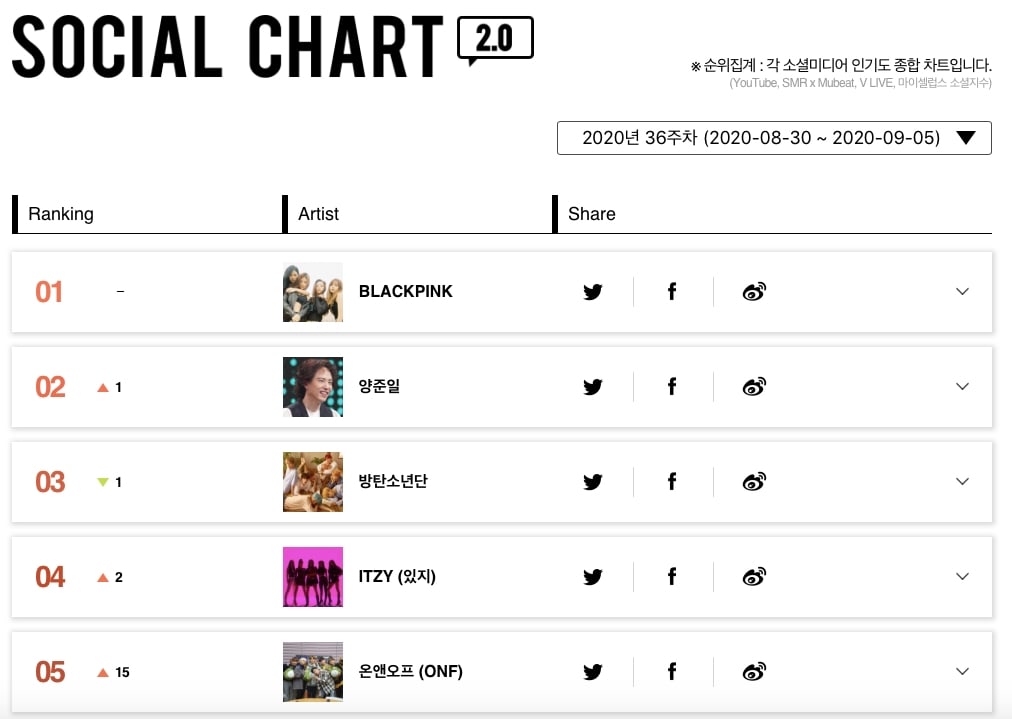 BLACKPINK also remained No. 1 on Gaon’s monthly Social Chart 2.0 for the fourth consecutive month. BTS came in at No. 2 for August, trailed by Kim Ho Joong at No. 3, Yang Joon Il at No. 4, and Im Young Woong at No. 5. 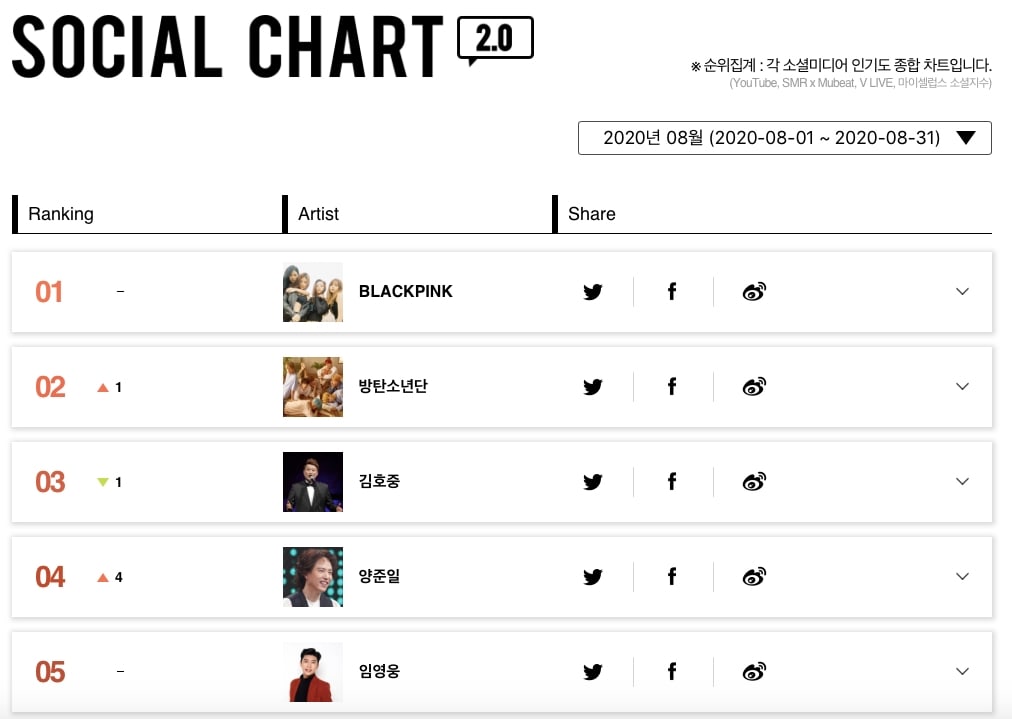 Check out the latest episode of “How Do You Play?” with English subtitles below!