Gaon Chart has revealed its chart rankings for the week of October 4 to October 10!

Check out the top five for each of this week’s charts below!

BLACKPINK’s first full-length album “THE ALBUM” debuted at No. 1 on this week’s physical album chart, with Golden Child’s new single album “Pump It Up” entering the chart at No. 2 and WEi’s debut mini album “IDENTITY : First Sight” at No. 3.

Stray Kids’ repackaged album “IN生” (“IN LIFE”), which previously debuted at No. 1 on the chart, climbed back up the rankings to No. 4 this week, while WJSN’s new sub-unit CHOCOME’s debut single album “Hmph!” rounded out the top five. 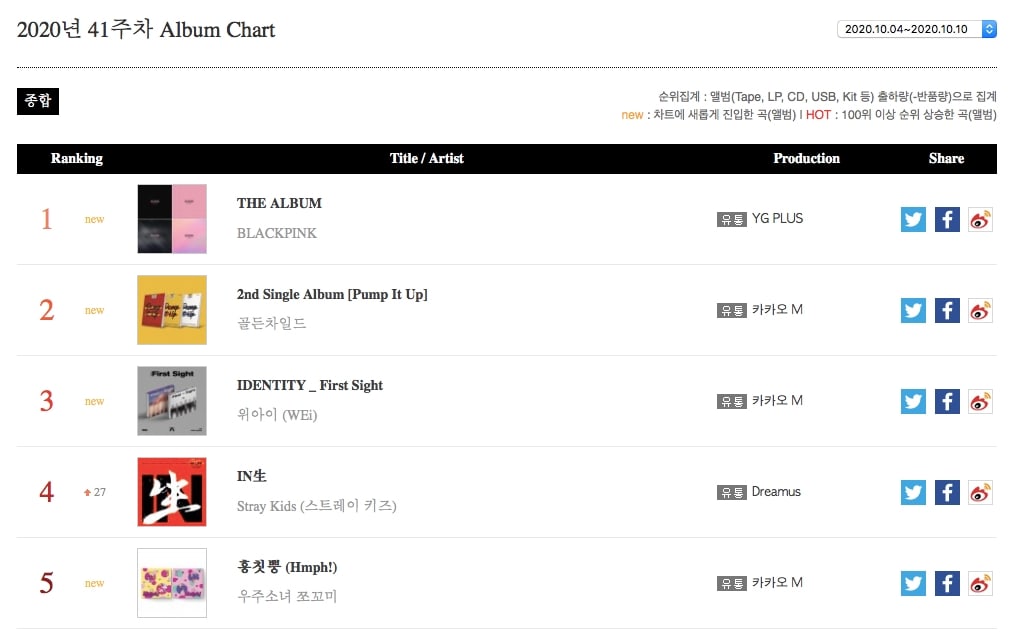 “How Do You Play?” project group Refund Sisters (consisting of Lee Hyori, Jessi, MAMAMOO’s Hwasa, and Uhm Jung Hwa) topped this week’s digital download chart with their debut track “Don’t Touch Me,” which entered the chart at No. 1.

BLACKPINK’s new title track “Lovesick Girls,” which debuted at No. 1 on last week’s chart, stayed strong at No. 2, followed by BTS’s long-running hit “Dynamite” at No. 3.

Finally, EXO’s Baekhyun’s “happy” (from the OST of the SBS drama “Do You Like Brahms?”) debuted at No. 4 on the chart, while Super Junior’s Kyuhyun‘s new ballad “Daystar” entered the chart at No. 5. 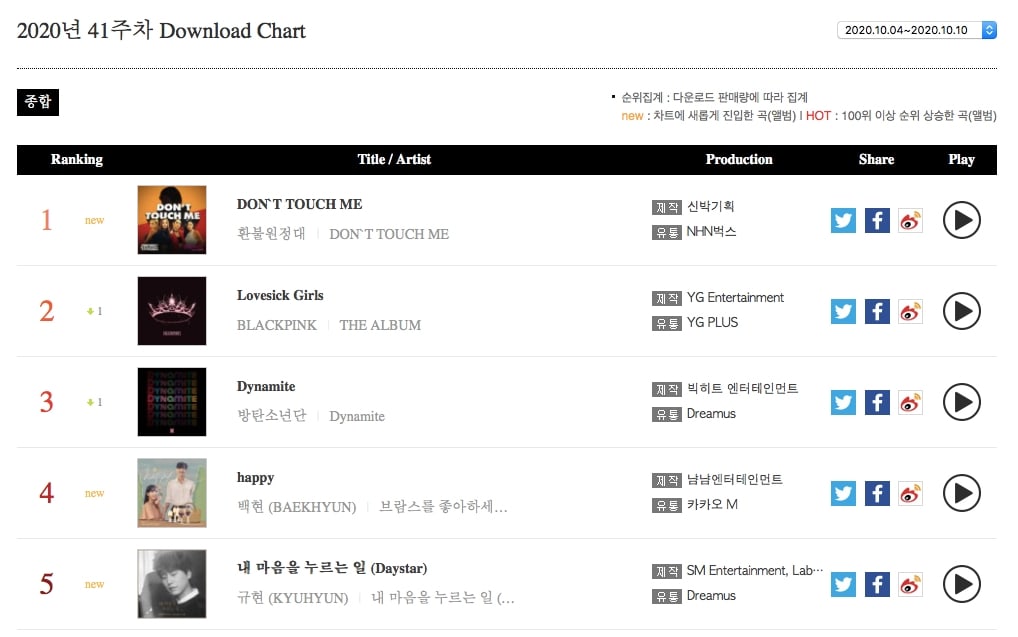 The top five songs on the overall digital chart and the streaming chart were exactly the same this week: BTS’s “Dynamite” remained No. 1 on both charts for the seventh week in a row, followed by BLACKPINK’s “Lovesick Girls” at No. 2, B1A4’s Sandeul’s “Slightly Tipsy” at No. 3, Park Jin Young and Sunmi’s “When We Disco” at No. 4, and Jessi’s “NUNU NANA” at No. 5. 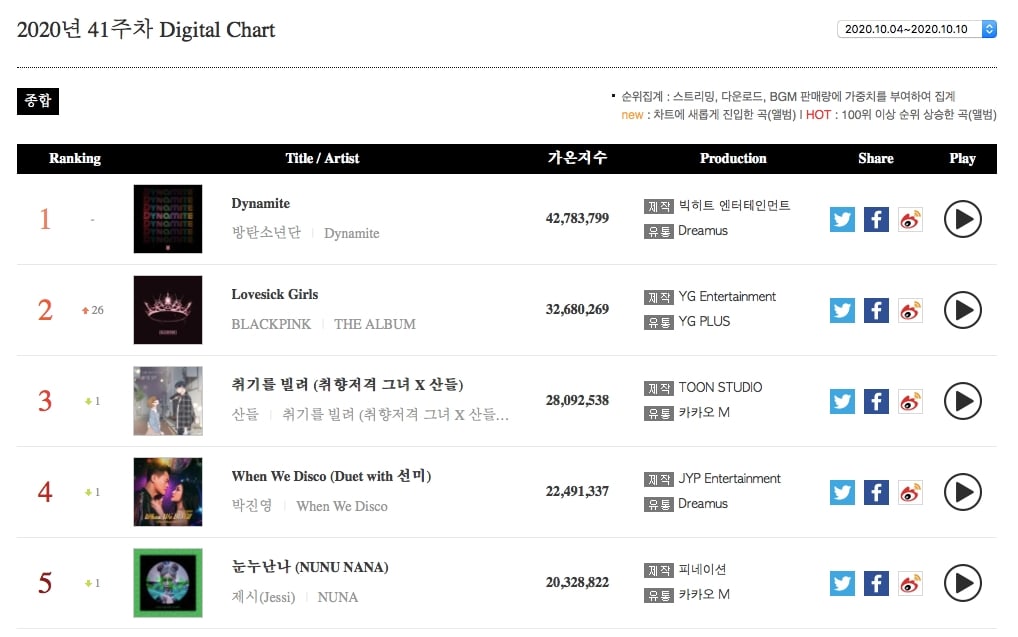 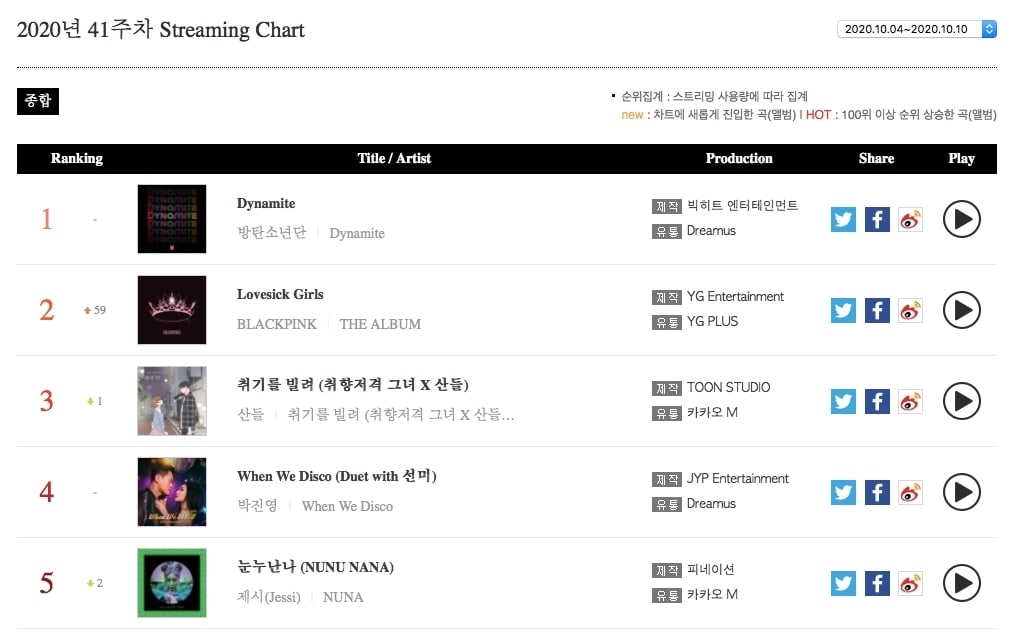 BLACKPINK continued their reign at No. 1 on Gaon’s Social Chart 2.0 for the 20th consecutive week, while trot singer Im Young Woong and BTS also held onto their spots at No. 2 and No. 3 respectively. EXO rose to No. 4 on this week’s chart, and The Boyz rounded out the top five for the week. 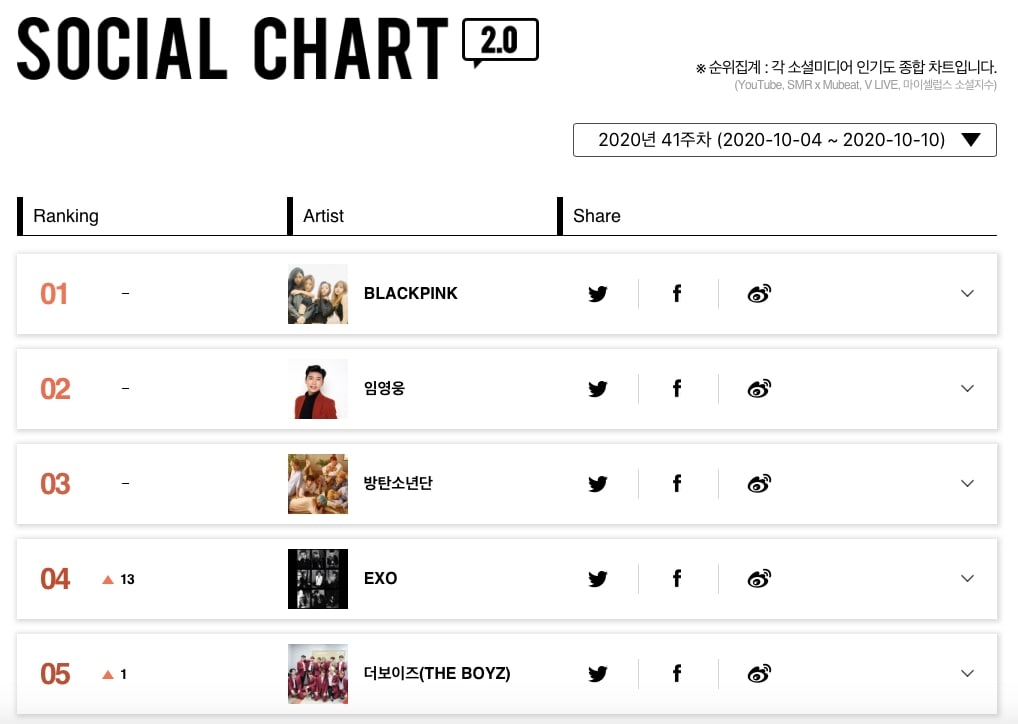