NCT topped the physical album chart for the month of December with “RESONANCE Pt. 2,” which previously debuted at No. 1 on the weekly chart last month.

IZ*ONE’s “One-reeler / Act IV” came in at No. 2 for December, while Kim Ho Joong swept the next two spots on the chart with “The Classic Album I” and “The Classic Album II.” Finally, EXO’s Kai rounded out the top five for the month with his solo debut release “KAI.” 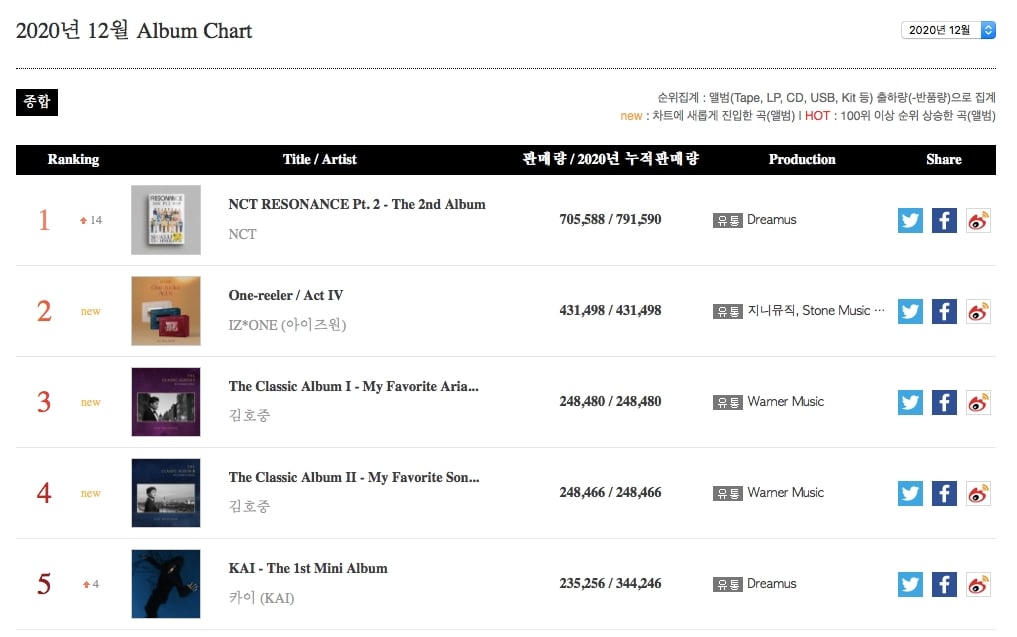 TXT’s “minisode1: Blue Hour,” which was originally released in October of last year, shot back up the chart more than two months after its initial release to claim No. 1 for the week of December 27 to January 2. 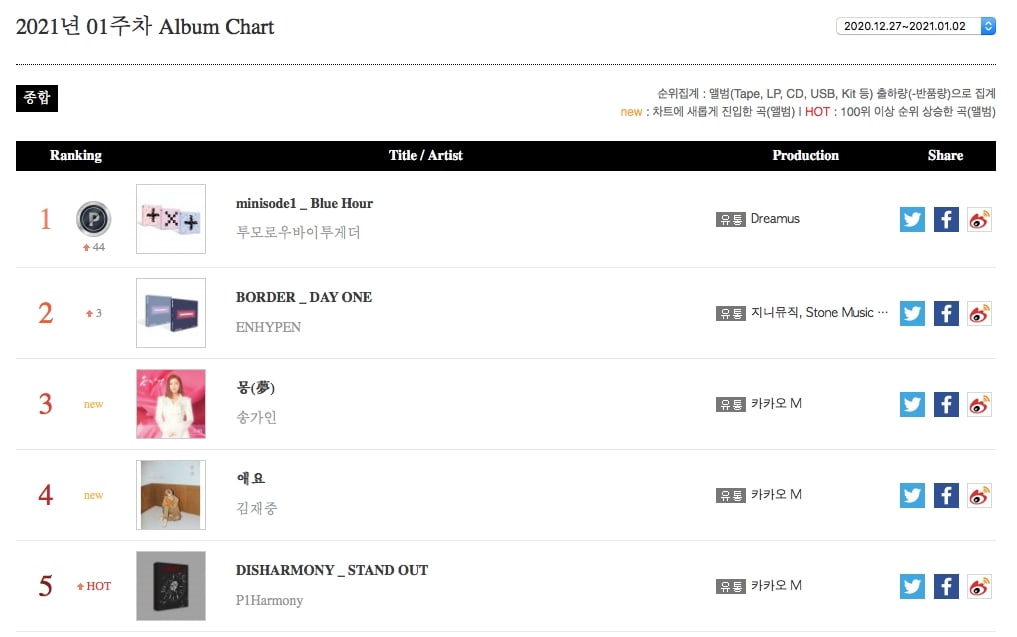 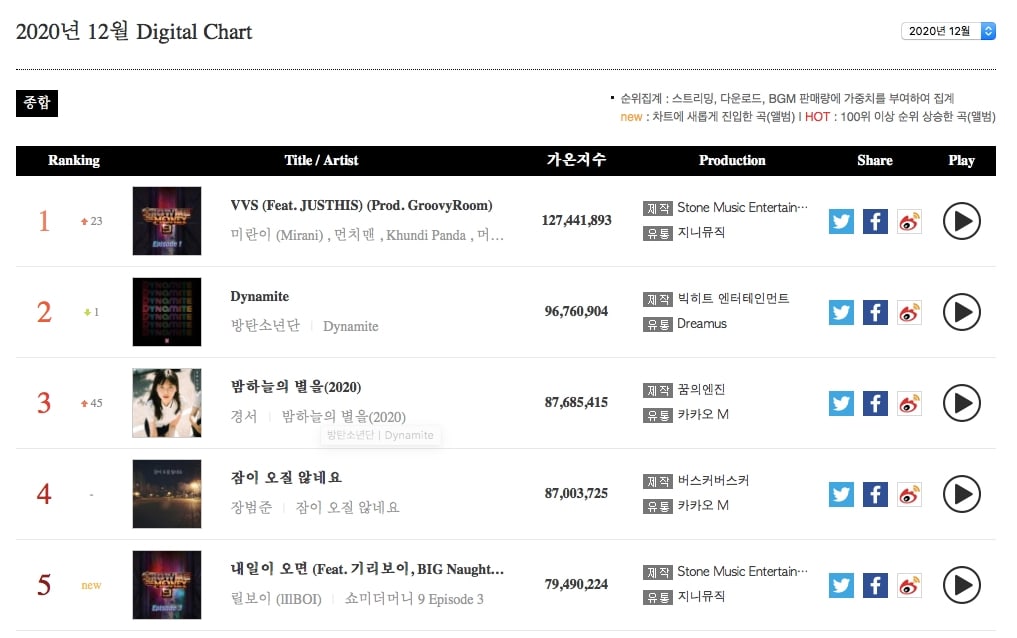 The top five songs on the overall digital chart and the streaming chart were exactly the same this week: Mirani, Munchman, Khundi Panda, and MUSHVENOM’s “VVS” claimed No. 1 on both charts, followed by KyoungSeo’s “Shiny Star (2020)” at No. 2, BTS’s “Dynamite” at No. 3, Jang Beom June’s “Can’t Sleep” at No. 4, and Lil Boi’s “Tomorrow” at No. 5. 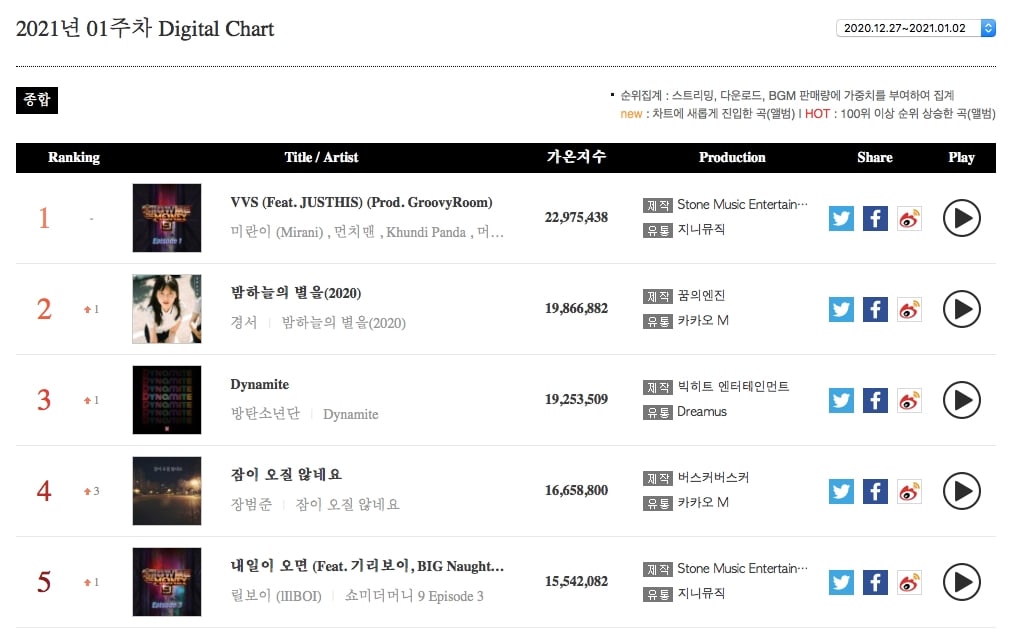 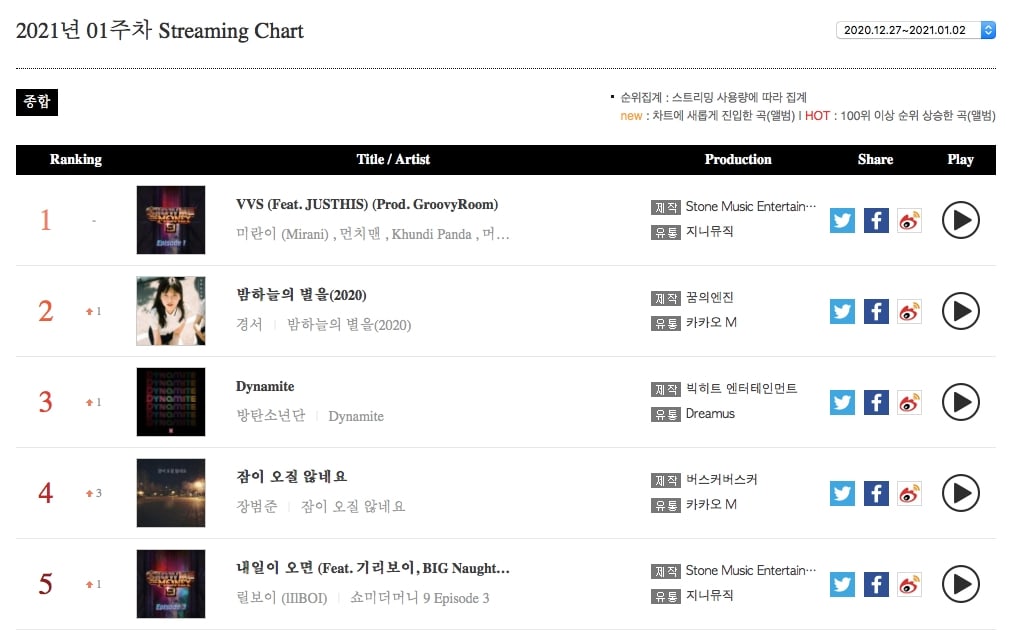 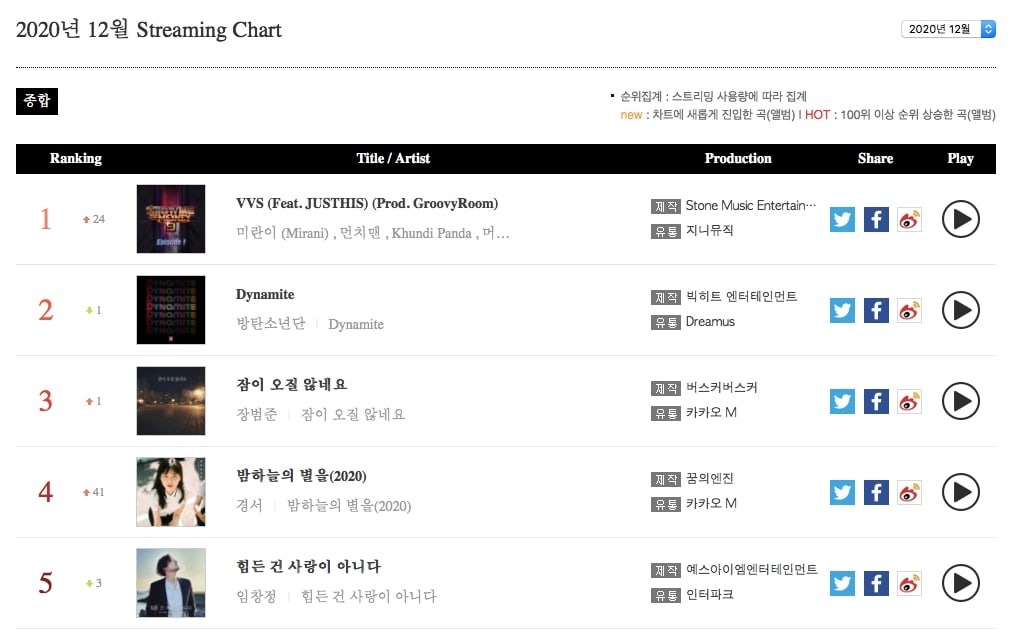 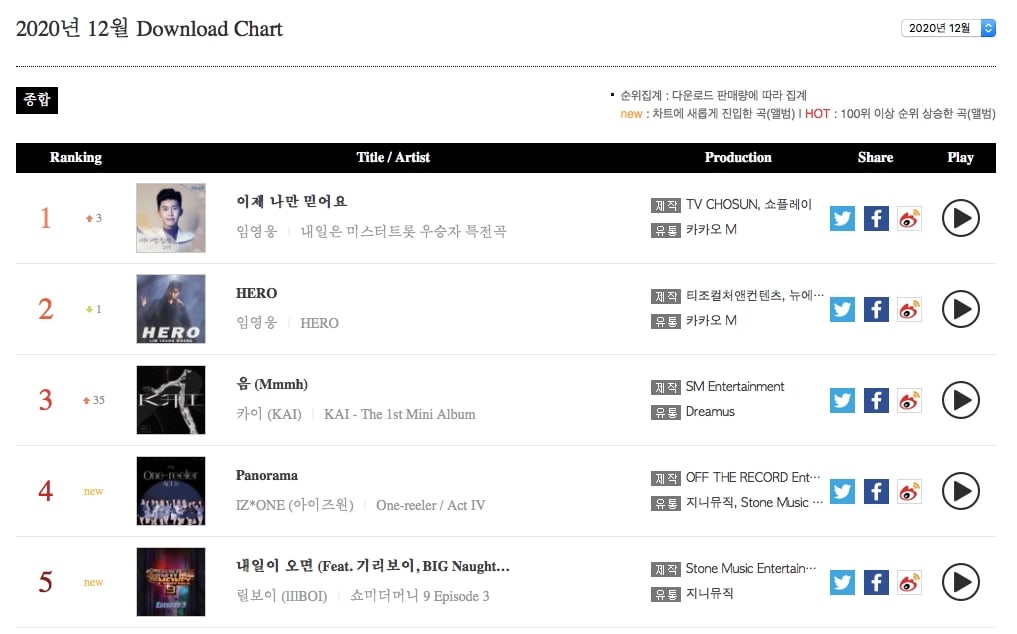 Im Young Woong also claimed both No. 1 and No. 2 on the weekly digital download chart with “Trust in Me” and “HERO” respectively. Rain and Park Jin Young’s new duet “Switch to Me” debuted at No. 3 this week, followed by Huh Gak’s “How Did We” at No. 4 and KyoungSeo’s “Shiny Star (2020)” at No. 5. 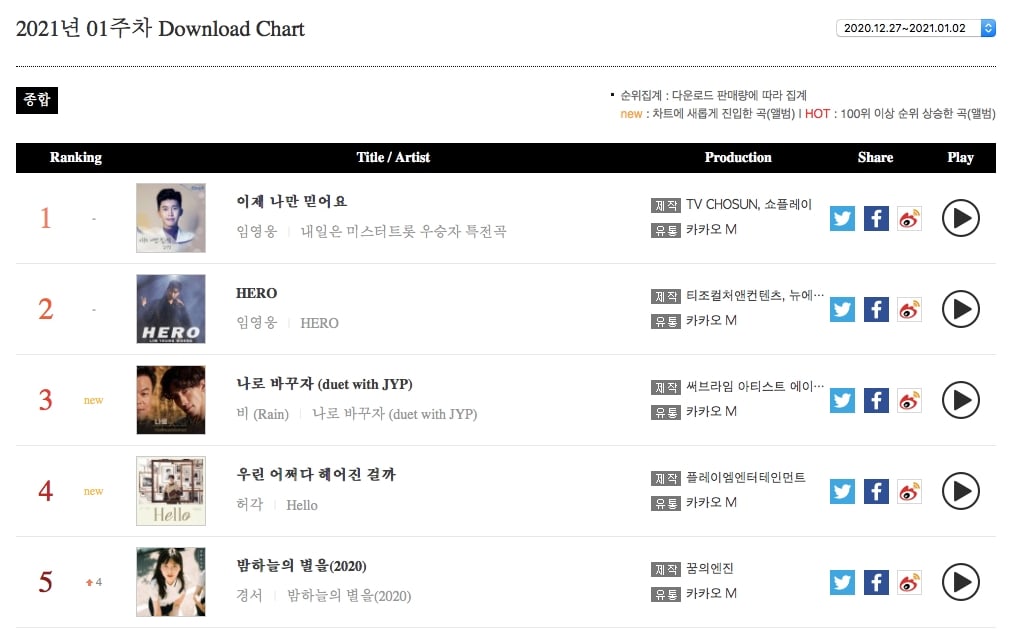 BLACKPINK topped Gaon’s “Social Chart 2.0” for the eighth consecutive month, while BTS and Im Young Woong maintained their respective positions at No. 2 and No. 3. IZ*ONE rose to No. 4 this month, while Yang Joon Il rounded out the top five for December. 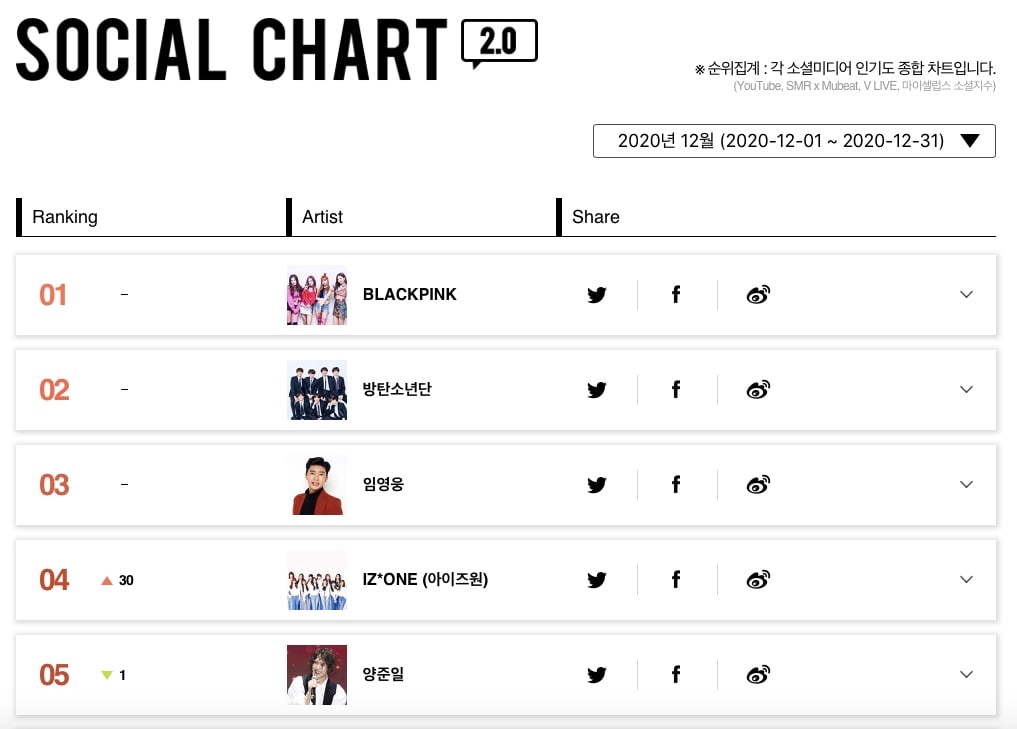 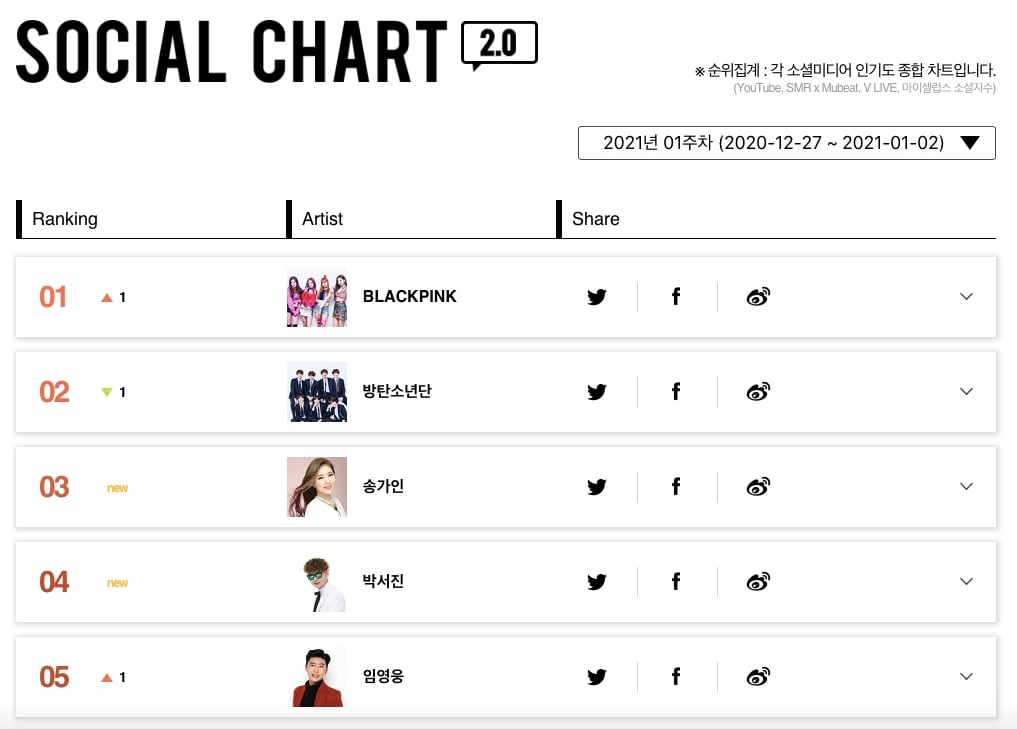