Gaon Chart has revealed its chart rankings for the week of October 11 to October 17!

“Don’t Touch Me” took No. 1 on this week’s overall digital chart, streaming chart, digital download chart, and BGM chart (which tracks the songs that people purchase to use as background music for their blogs and KakaoTalk profiles).

Meanwhile, NCT topped this week’s physical album chart with their new album “RESONANCE Pt. 1,” which debuted at No. 1.

Finally, BLACKPINK continued their winning streak at No. 1 on Gaon’s Social Chart 2.0 for the 21st consecutive week.

NCT’s second album as a full group, “RESONANCE Pt. 1,” debuted at No. 1 on this week’s physical album chart. BTS’s “Special Addition” reissue of their 2014 mini album “Skool Luv Affair” entered the chart at No. 2, followed by trot singer Kim Ho Joong’s “Our Family” at No. 3. PENTAGON’s new mini album “WE:TH” debuted at No. 4 on the chart, and SF9’s special album “SPECIAL HISTORY BOOK” rounded out the top five for the week. 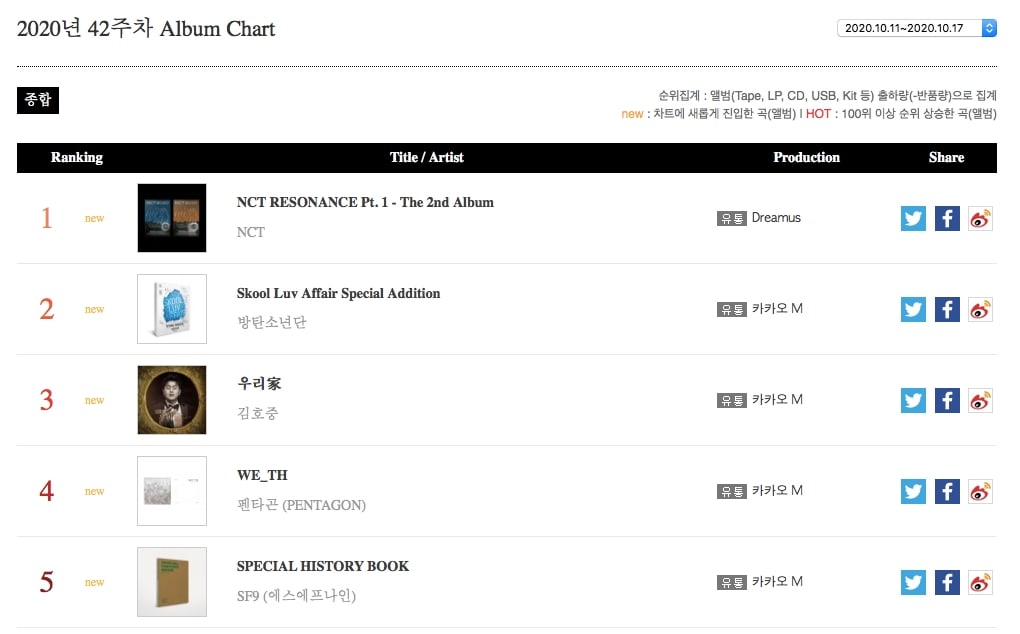 Refund Sisters’ “Don’t Touch Me” remained No. 1 on the digital download chart for the second week in a row, while NCT U’s “Make A Wish (Birthday Song)” entered the chart at No. 2. BLACKPINK’s “Lovesick Girls” stayed strong at No. 3, followed by PENTAGON’s “Daisy” at No. 4 and BTS’s “Dynamite” at No. 5. 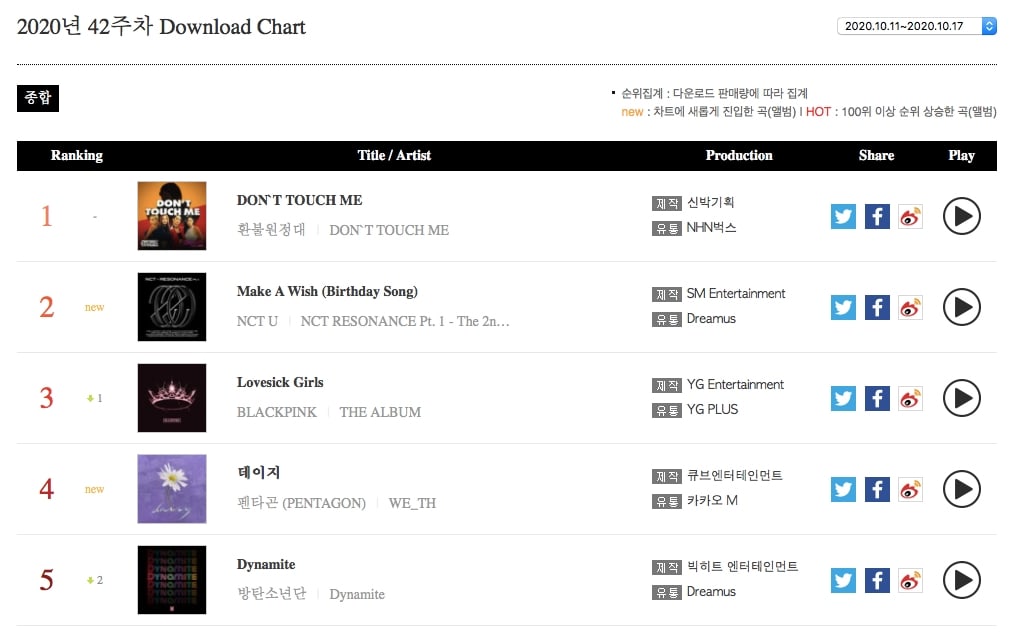 The top five songs on the overall digital chart and the streaming chart were exactly the same this week: Refund Sisters’ “Don’t Touch Me” rose to No. 1 on both charts, with BTS’s “Dynamite” at No. 2, BLACKPINK’s “Lovesick Girls” at No. 3, B1A4’s Sandeul’s “Slightly Tipsy” at No. 4, and Park Jin Young and Sunmi’s duet “When We Disco” at No. 5. 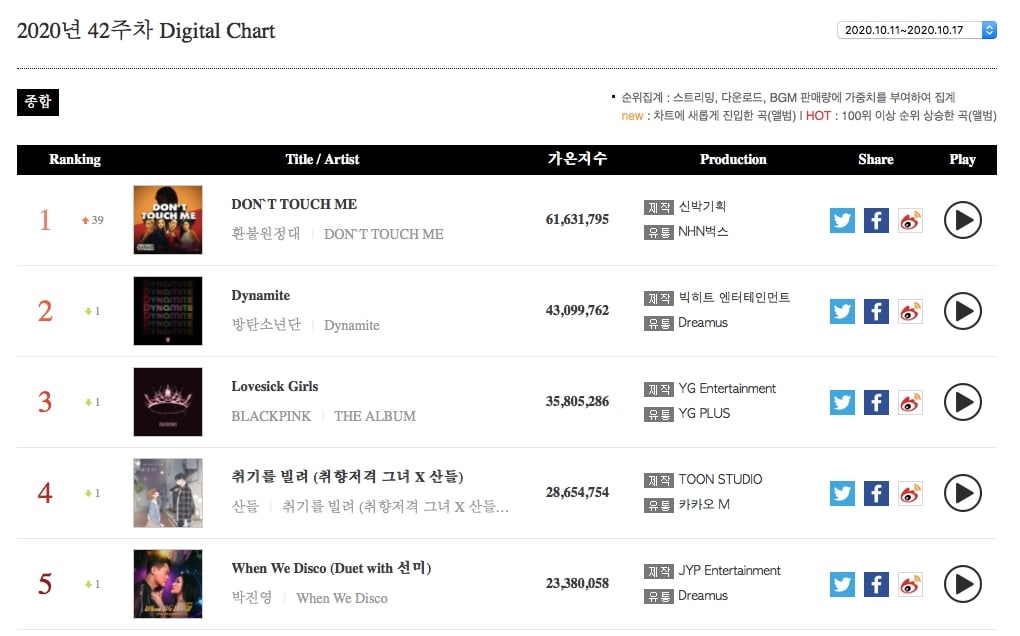 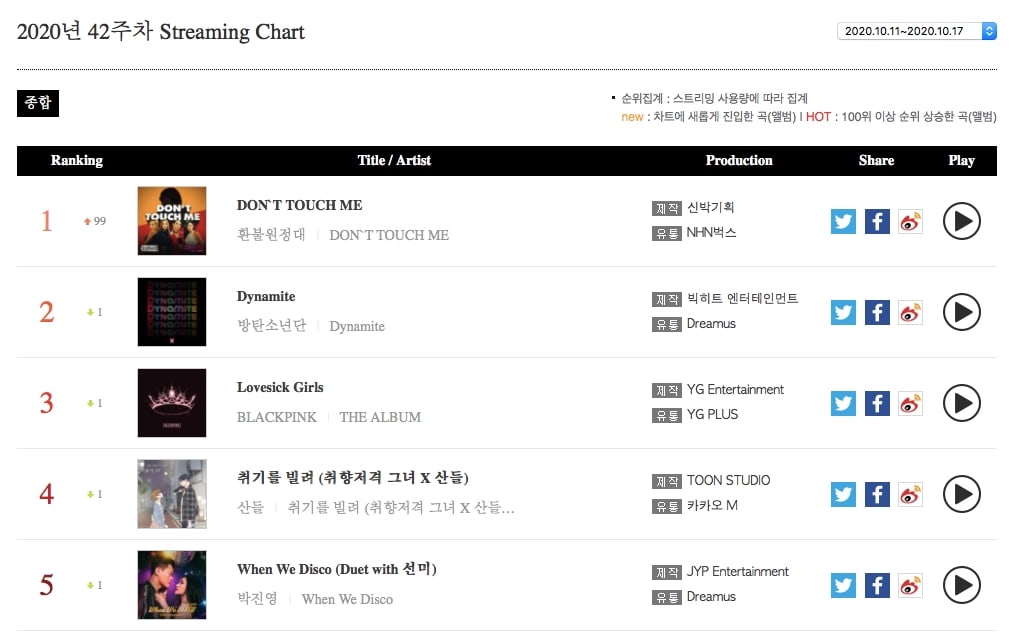 BLACKPINK remained No. 1 on Gaon’s Social Chart 2.0 for the 21st consecutive week, while BTS rose to No. 2. Refund Sisters made their debut on the chart at No. 3, and trot singer Im Young Woong stayed strong at No. 4. Notably, NCT’s Jaehyun entered the chart at No. 5 on his own: a rare feat for an idol group member. 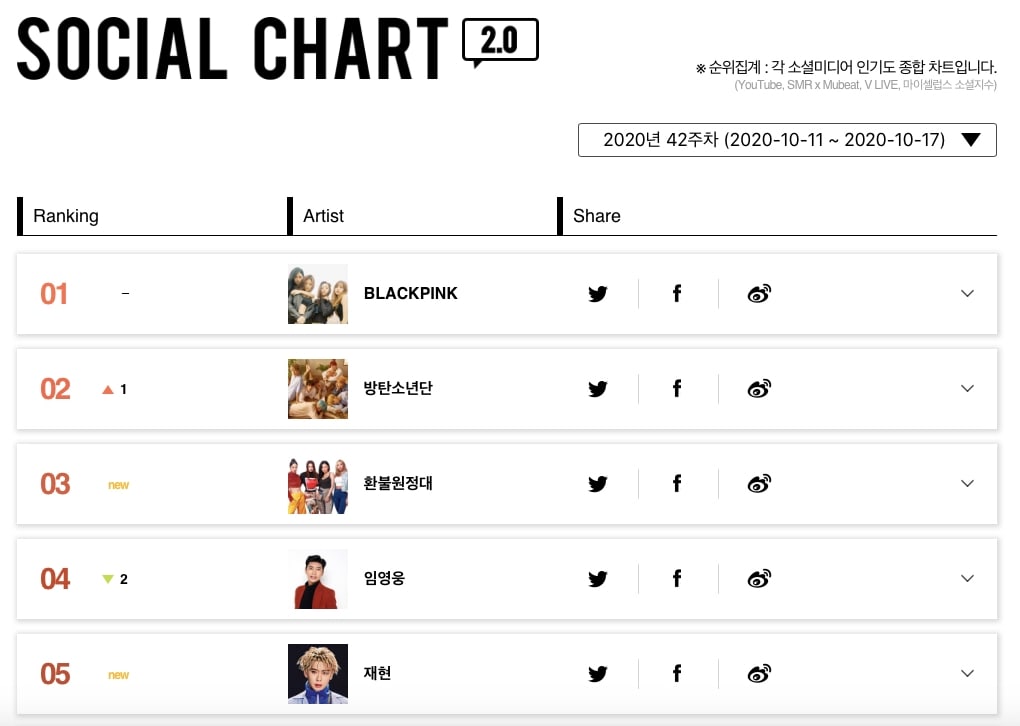