TREASURE topped the physical album chart for the month of January with their first full-length album “THE FIRST STEP : TREASURE EFFECT,” which previously debuted at No. 1 on the weekly chart last month.

NCT’s “RESONANCE Pt. 2,” which received an official million certification from Gaon this month, stayed strong at No. 2 on the chart. (G)I-DLE’s “I burn” came in at No. 3, followed by TVXQ’s Yunho’s “NOIR” at No. 4 and CRAVITY’s “SEASON 3 HIDEOUT: BE OUR VOICE” at No. 5. 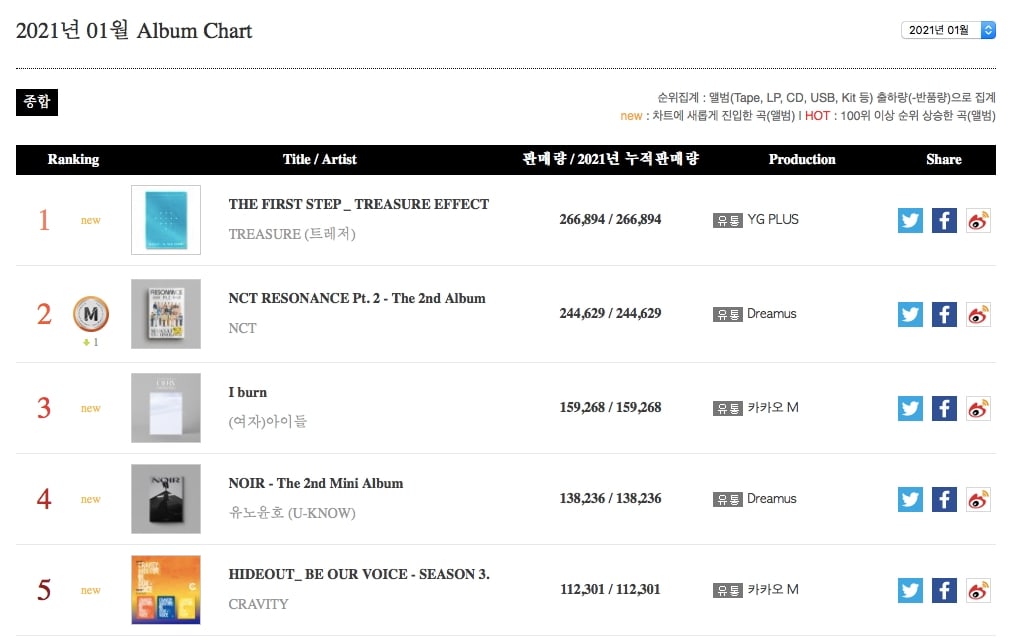 CIX’s new mini album “HELLO Chapter Ø. Hello, Strange Dream” debuted at No. 1 on the album chart for the week of January 31 to February 6, trailed by Yunho’s “NOIR” at No. 2.

BTS’s 2018 album “Love Yourself: Answer” climbed back up to No. 3 on the chart this week, while Dreamcatcher’s “Dystopia : Road to Utopia” stayed strong at No. 4. Finally, INFINITE’s Kim Myung Soo (L)’s first solo single “Memory” entered the chart at No. 5. 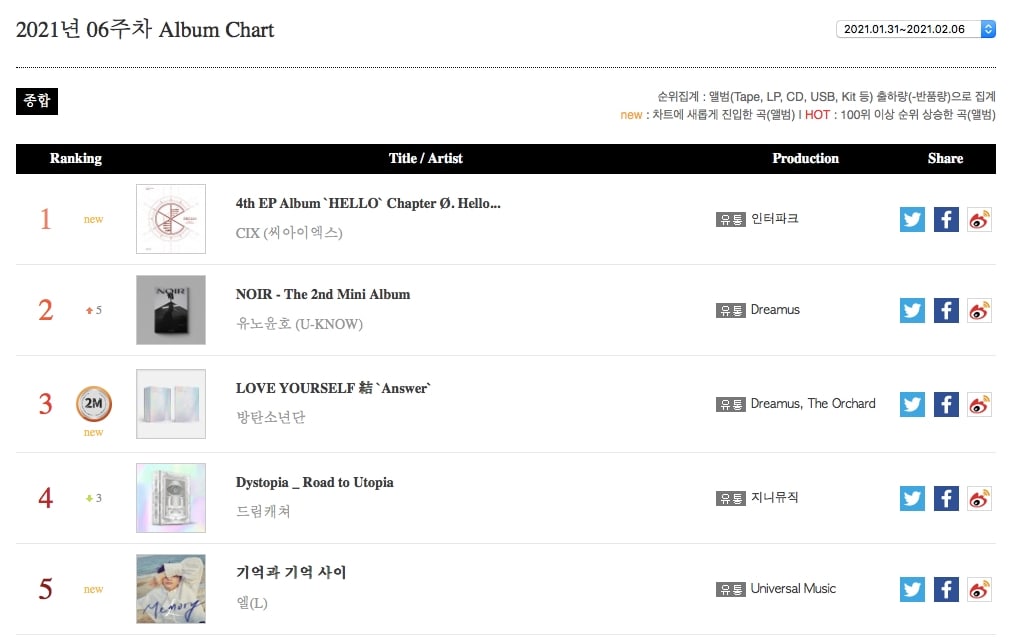 IU topped the digital download chart for January with her latest hit “Celebrity“—an especially impressive feat considering that the song was released on January 27, just a few days before the end of the month. 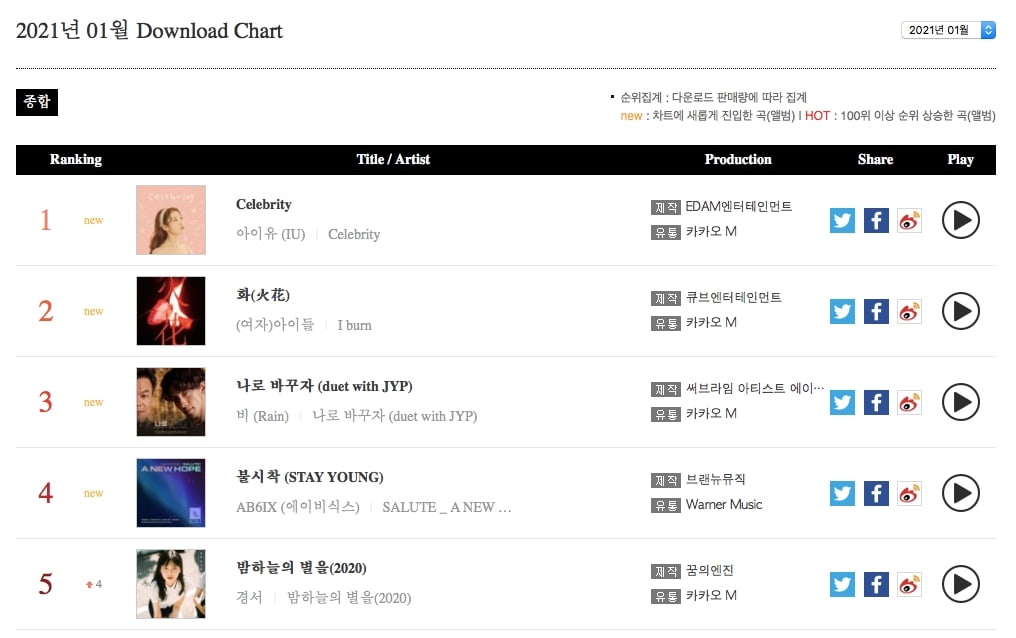 SECHSKIES’s “Don’t Look Back” debuted at No. 1 on this week’s digital download chart, with IU’s “Celebrity” and Golden Child’s “Burn It” staying strong at No. 2 and No. 3 respectively. 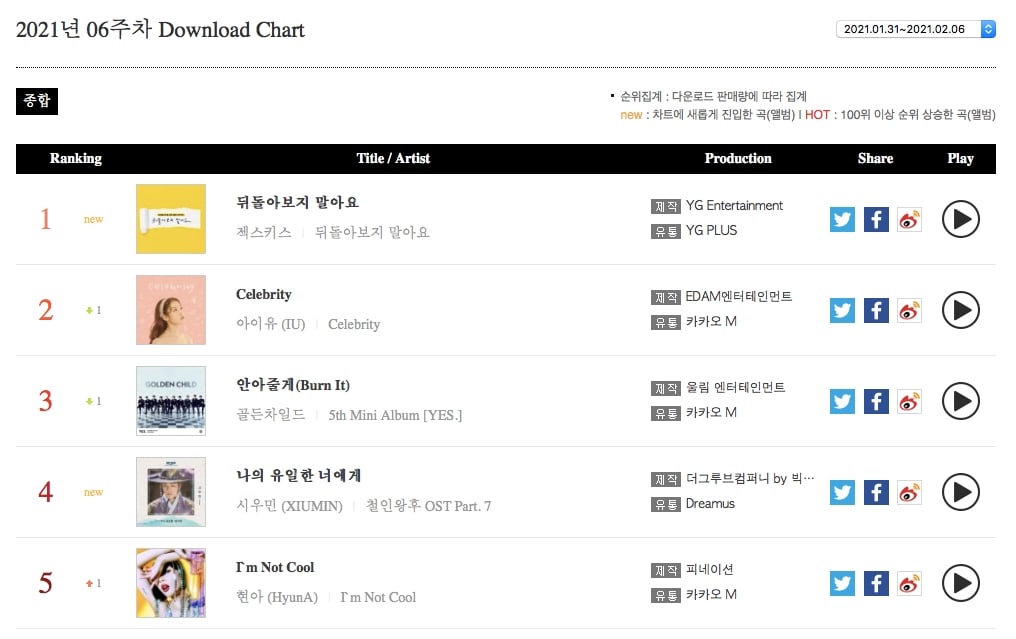 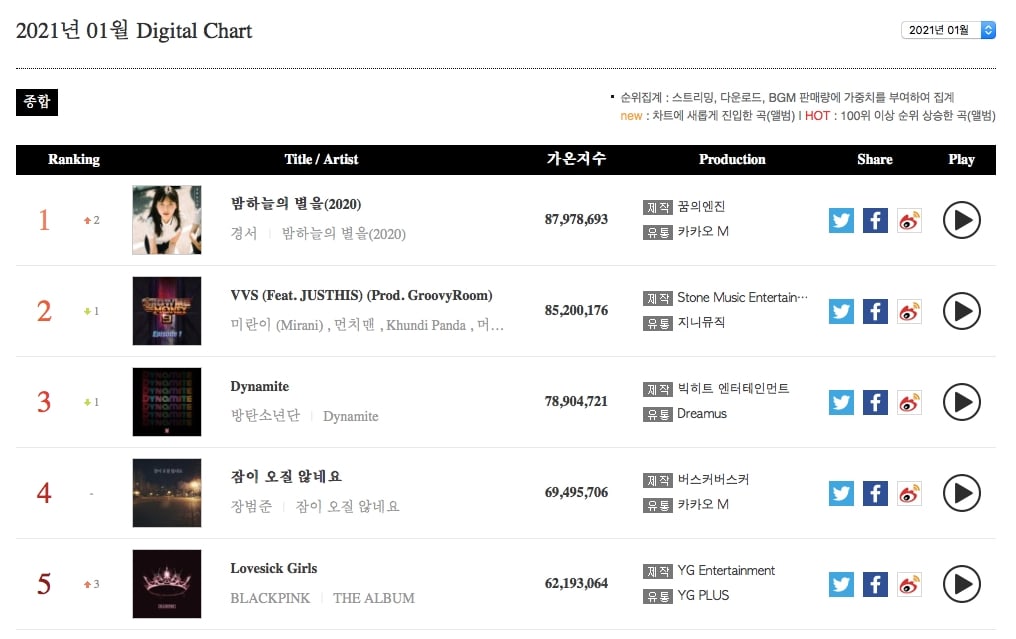 IU achieved a double crown on the latest weekly charts after topping both the overall digital chart and the streaming chart for the second consecutive week with “Celebrity.” 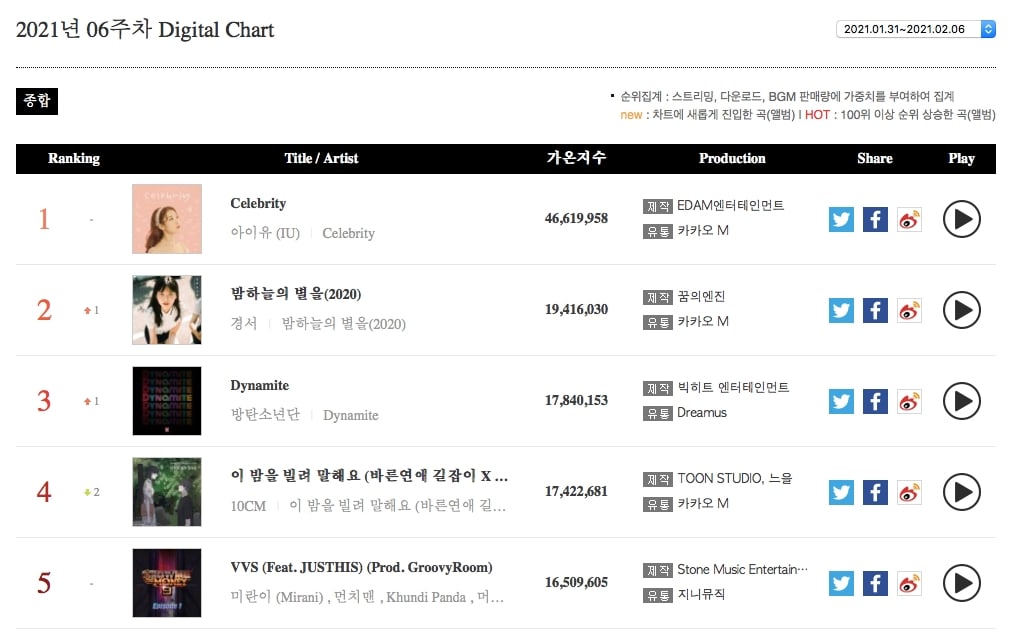 Mirani, Munchman, Khundi Panda, and MUSHVENOM’s “VVS” topped the streaming chart for the second consecutive month, trailed by KyoungSeo’s “Shiny Star (2020)” at No. 2, BTS’s “Dynamite” at No. 3, Jang Beom June’s “Can’t Sleep” at No. 4, and BLACKPINK’s “Lovesick Girls” at No. 5. 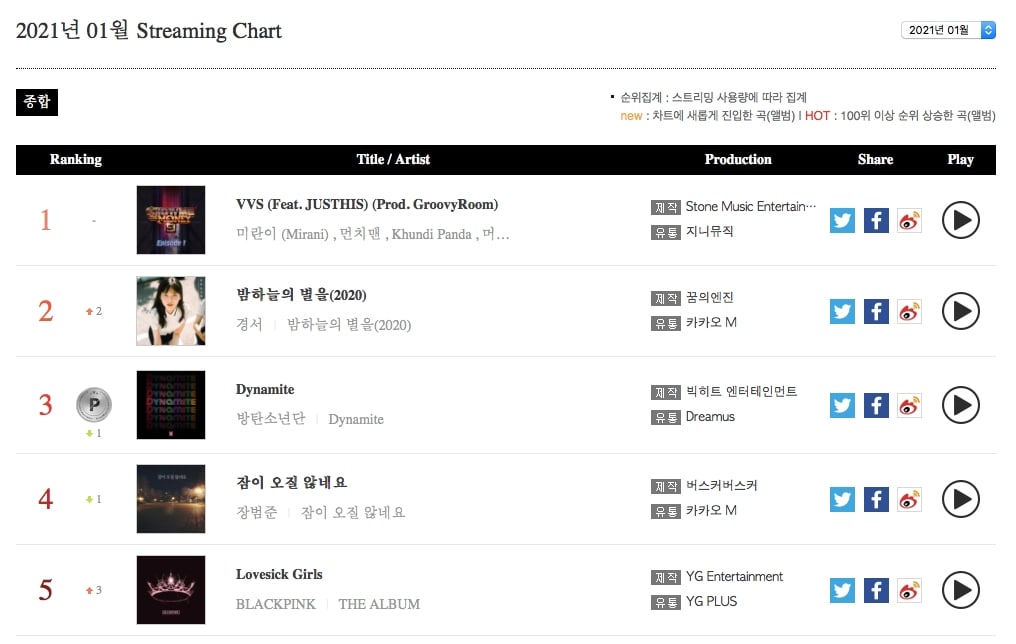 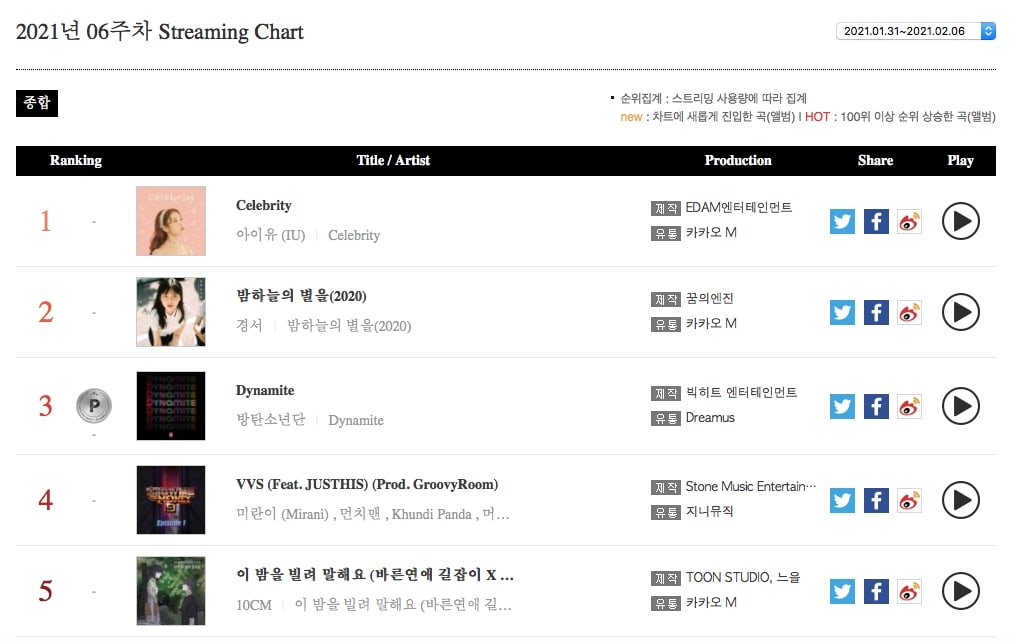 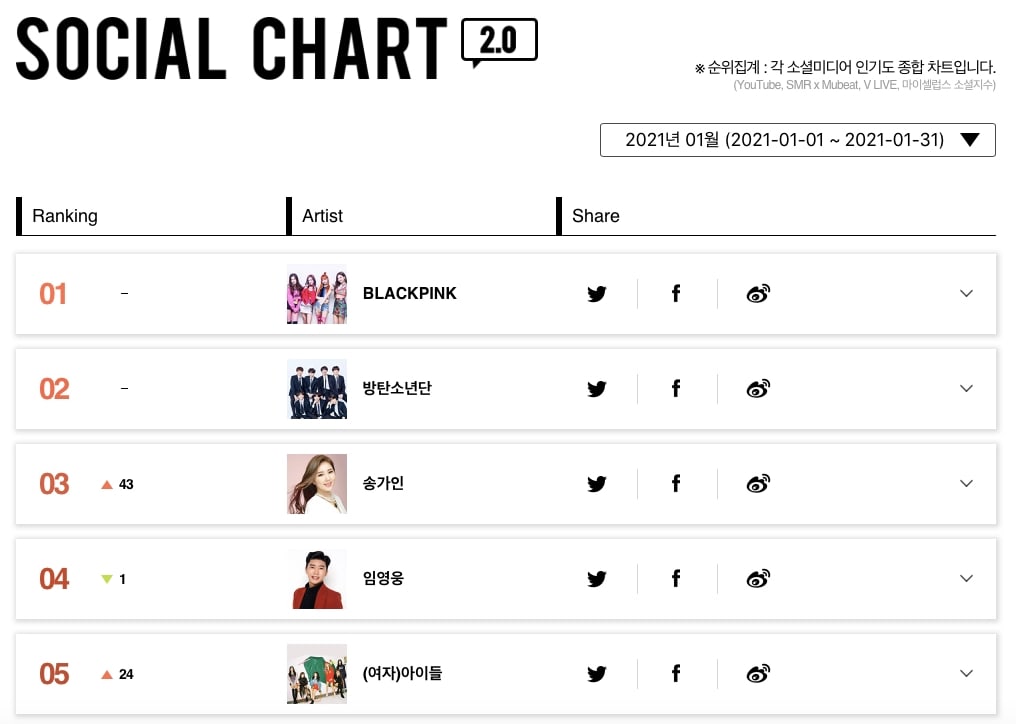 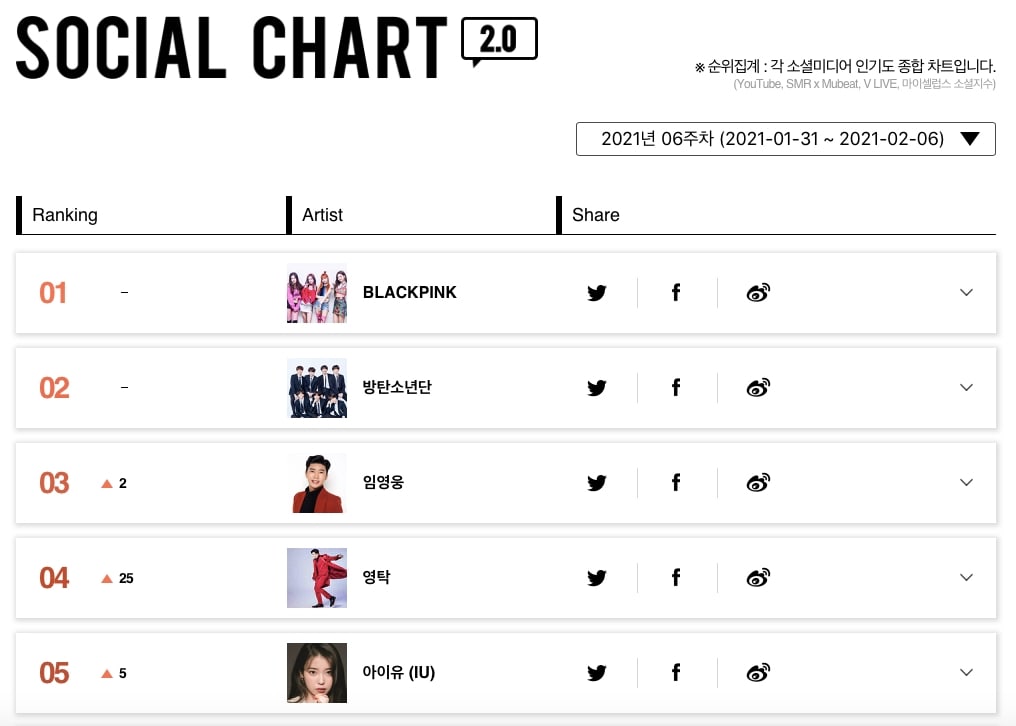