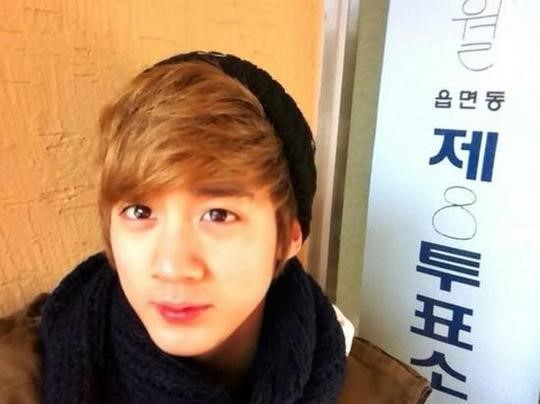 50 Stars Who Voted on Election Day!

December 19 was a very important day for South Korea as the 18th presidential election took place. When polls opened at the crack of dawn, people were busy fulfilling their roles as citizens of Korea and casting their votes for the next president.

Throughout the days leading up to this day, celebrities had been urging everyone to make sure to place their votes. So when the final day came, countless celebrities posted up proof shots to show that they participated in one of the greatest parts of democracy – voting!

Take a look at these 50 celebrities who have honored their duty as respectable citizens of Korea! Some of these stars include: 2AM, B1A4, Dal Shabet, Girl’s Day, Girls’ Generation, SHINee, Hyun Bin, So Ji Sub, IU, JYJ, Lee Byung Hun, Shin Min Ah, BEAST, Lee Jun Ki, Rainbow, Park Shin Hye and many, many more!

Super Junior’s Ryeowook tweeted, “All those who like Ryeowook, please follow me. I came to Incheon and am on my way back to Seoul. Let’s vote! Be careful of the cold.”

Som Dam Bi tweeted, “I’m happy to see so many people voting~~ I voted with Hee Chul. Everyone, please vote.”

Solbi showed off her proof shot and her unique fashion sense.

She posted on her me2day, “I came to the voting booth with my family. Thinking about my parents’ retirement, the education for my soon-to-be born niece and a brighter and more hopeful future! Having a better Korean society means peace in the Korean family.”

2NE1’s Sandara Park posted on her me2day, “It’s really cold today. Everyone be careful of the cold and have a great day.”

Rainbow’s Jae Kyung posted on her me2day, “Came out of the dorms for the first time in a while and ate home-cooked food at home and voted with my grandma~! All the fans! As a birthday present to me, please send me your voting proof shots! Hurry, hurry, go vote!”

Actress Park Shin Hye tweeted, “I hope Korea because a Korea where everyone can have a healthy life. Please use your privilege as a citizen. I am off to the filming set now!”

On December 19, Lee Jun Ki tweeted, “Are you watching over me by telling me to post up my proof shot? I woke up at 6:35 AM and went to my father and finished voting by 8AM~ All of you, who are the owners of Korea, hurry and go write a new chapter of history. It’s cold outside so dress warmly.”

Lee Hyori tweeted, “Voting completed!” as she showed off her “voting fashion.”

JYJ’s Junsu tweeted, “I voted. Now for the rest of the day, I hope you will all vote as citizens of this country.”

Jewelry’s Kim Eun Jung tweeted, “Proof shot of my vote! I voted so now back to Seoul~”

On December 19, Byul tweeted a photo of her and her hubby Haha and said, “Proof! As proud citizens of Korea, we give our precious votes ^^ We came right after working at an event! Proud. Now, everyone go vote! Go go!”

D-Unit posted a couple of proof shots on their official me2day.

Jin posted, “Today is election day! It’s my first time voting so I’m very excited. I thought voting would be complicated but it’s not at all and I came out quickly. You all are going to vote, right?”

Yoo Jin also posted, “Hello. This is Yoo Jin. I woke up early this morning to come to vote. It was early but there were a lot of people. The people of Korea have great participation mindsets. I hope the chosen president will lead Korean politics well in the future. Fighting.”

Ballad duo December member DK tweeted, “Precious privilege… Overcame my palsy in my arm and voted! Everyone, you all voted, right?”

BEAST’s Yang Yoseob posted on his fan cafe, “I woke up and was out of it because of my cold but I snapped out of it and came to vote. Everyone, let’s vote. Please leave your proof shots.”

B.A.P‘s leader Bang Yong Guk tweeted, “Many people are saying great things. So to add a short message to all the youth, I hope this proud vote won’t just end as a kind of event but I hope everyone will take more interest and participate more in politics and society,” and “Years later, your power will be a great strength.”

Gong Chan tweeted, “After voting for the first time ever, I’m so proud,” and “Everyone with voting rights, please head to your voting booths before 6PM.”

Sandeul also tweeted a photo of himself and Shin Woo. He said, “We gave our valuable votes! Don’t forget to vote by 6PM!”

Singer ALi tweeted, “There were so many people at the voting booth that I’m leaving my proof shot like this.”

She also tweeted, “Voting completed! In this cold weather, there are many who came with a child or with an elderly person. As a citizen, I voted for a healthy Korea. It’s only up until 6PM, don’t forget!”

2AM’s Jinwoon tweeted, “I came to vote for the first time, hand-in-hand with my mother.”

Yoon Eun Hye tweeted, “Voted before going on set to film. Where can I take a proof shot… It looks pitiful but click!”

She also tweeted, “It’s very cold. Dress warmly like me. I’m off to work hard now~ Everyone, please vote!”

A netizen showed that the nation’s MC, Yoo Jae Suk also voted on this day. This netizen snapped a photo with MC Yoo and posted it on an online forum saying, “No one was coming in the morning so I was yawning but all of a sudden, Yoo Jae Suk appeared and voted. The voting booth went crazy.”

Singer Yoon Do Hyun tweeted, “This cutie just voted,” and posted a photo of himself in earmuffs!

Teen Top’s Chunji, who voted for the first time, tweeted, “Nervous about my first presidential election vote!! Me too, me too, proof shot!! I voted with my family and am headed back now~ Everyone, let’s all vote!”